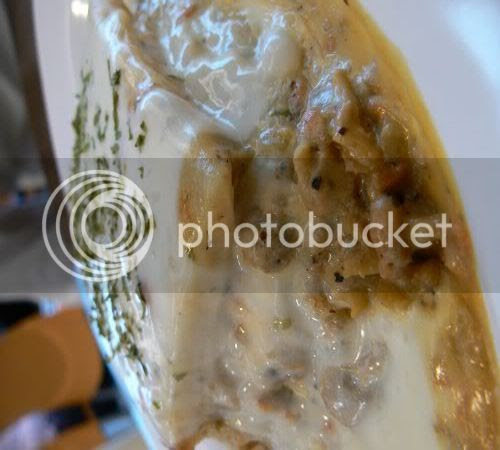 Last Friday, we were hanging around Suria KLCC to catch the Da Vinci Code on screen. Since there was a new outlet at the Signatures Food Court (Level 2), we decided to give it a try. We wanted something quick before the movie started. Cafe Milano is actually a sister outlet of the ever popular Pizza Milano and they have now taken over Gelare's front lot. While Pizza Milano serves pasta and pizzas, Cafe Milano serves lasagne, shepherd pies, various meatball pasta, ice cream and waffles. I suspect they must have taken over Gelare's old waffle and ice cream equipment.
I had their version of shepherd's pie - it's available in beef and chicken(RM8.50). A total misnomer since shepherd's pie means minced lamb but here it's used loosely as anything with a mashed potato topping. What is hilarious is their version starts off as a lasagna with the pasta sheets but ends up with a mash potato topping! The "pie" is not too bad but somehow the filling had an overdose of black pepper making it extremely peppery. 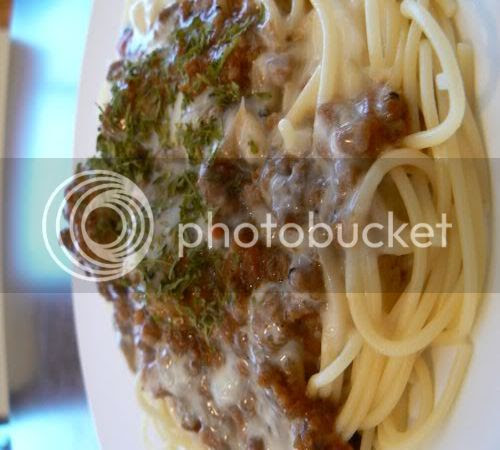 Splashie Boy had Meatball Bolognaise Spaghetti(RM7.99) i.e. three beef meatballs with pasta tossed in bolognaise sauce. Sauce is not too bad as it's the same as the Pizza Milano place but meatballs are definitely factory processed. There are various meatball pastas with different toppings including one with Pizza Milano's famous Alfredo Sauce. 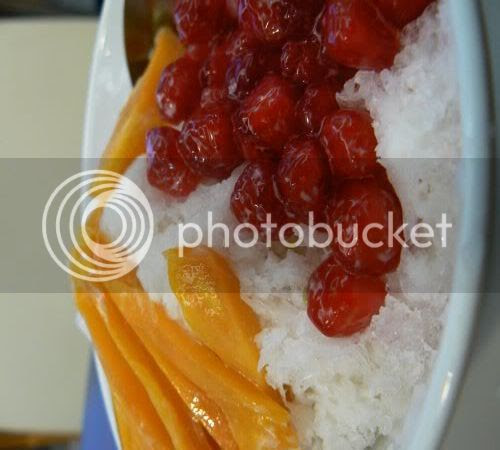 We also ordered desserts - a nice and icy cold Red Rubies(RM3.80+) for me. I like the dessert stall as they have a huge variety of desserts. They also serve durian cendol if you are feeling adventurous. Quite a good choice especially if you're a tourist who is just in KL. The red rubies are actually pieces of water chesnuts encased in a red jelly substance. The yellow fruit is jackfruit which is all mixed up with the shredded ice and coconut milk. 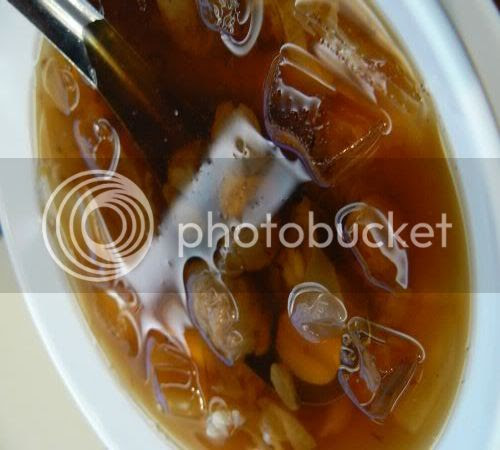 Splashie Boy had the leng chi kang(RM3.33+) which was really difficult to take a picture of since there was a light reflection. Whenever we order from this stall, these are the two must haves for us. There's not much happening at the food court but the sausage stall is no longer there and has been replaced by a Hong Kong noodle outlet called Eat & Talk. Will give that a try the next time I dine at Suria KLCC.
Cafe Milano & Just Desserts
Signatures Food Court
Level 2, Suria KLCC
*Disclaimer: The opinions expressed here is entirely based on my personal tastebuds and may vary for others. The reviewer also declares that she has not received any monetary or non-monetary compensation from the restaurant for writing this review
Tagged with: Red Rubies + Suria KLCC
Posted by boo_licious at 9:45 AM

wooo looks yummy lee.. i always pass by it during lunch time, but nvr tried it... haha!

we tried tarbush, the lebanese place in the food court, not too bad, actually. the garlic dip was quite good.

joan - hope you enjoy it.

fulltime mom - I tried Tarbush at Starhill's Feast Gallery, it's very nice. Give that a try - it has a nice atmosphere too.

hi boo! will definitely give Tarbush at Starhill a go then. Wonder if it's the same group?

fulltime mom - it is part of the group but the ambience is nicer. However very difficult to take pixs with my old camera as it was so dim the lighting. we had one of those mixed grills with all their different varieties to share. Very nice.

Thanks! Will definitely make a trip there soon, then.

fulltime mom - just make sure you don't wear high heels or stilettos at feast - that place has uneven flooring for the sake of art.

my fav place for lasagna too.. cheap n yummy right.. haven't try any other foods there cos i'm so tempted by their lasagna.. :)