A guide to food reviewspeak, courtesy of May 2009's Appetite magazine 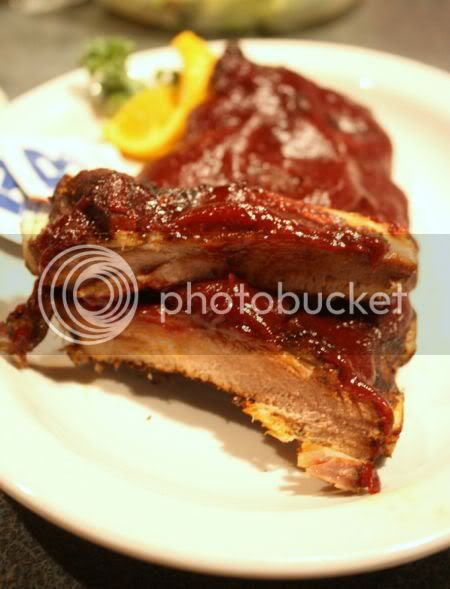 these barbeque pork ribs got the foodfella's approval but I dare not venture into what kind of foodspeak he will use to describe it though......

I just got my copy of Appetite magazine and as usual, the first thing I do is turn to the last pages to read Christopher Tan's column. Having met the famous foodie last year in the USA, I've been keenly following his column. In fact, he's the one who recommended I try the Geylang frog porridge, which I crawled out of Changi Airport at 3am to savour.
This was by far, the best ever column I've read where he does a guide on what food reviewers actually mean. It is absolutely hilarious and to be honest, I find myself sometimes guilty of using those terms. Ooops, one must stop as it can be so true, especially when one wants to say in a nice manner, "the food sucks like shit!"
Do go get the issue yourself and read through those gems he has picked out. To tempt you all, here are some for you to nibble on.
An acquired taste: I spat most of it discreetly into my napkin
or
The taste was indescribable: I'm not entirely sure what I was eating...come to think of it I'm not sure whether I enjoyed it either.
Posted by boo_licious at 11:57 PM

Some sharp and witty remarks :-) Have a good Sunday!

Hahaha, the "acquired taste" treatment just screams indignant diplomacy!! I love this kind of writing, makes it a joy to read, even about food that's less than recommended!

I'm inline with 550ml jar of faith on the acquired taste treatment! :)

LOL! I could do with some of his diplomatic 'phrases' for writing invited food reviews!

Acquired taste is reserved for food that I do not like at sight or first bite but have come to terms with, and even starting or already liking it:) esp taking into consideration the cultural and contextual aspects.

Allie - you planning to use that term too?

thenomadGourmand - oops, don't let people know that or else?

hehehe I've used "an acquired taste" a few times in my own reviewing :P

alexandra - I'll look out for "an acquired taste" in your writings the next time.