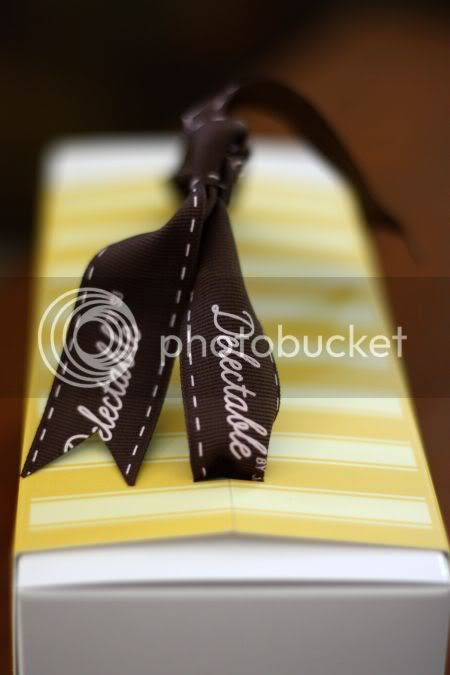 I have a big secret - I actually stalk food blogs especially whenever I have time. A quick search on Google often yields up interesting food blogs that I never knew existed, hence I'll bookmark them before adding them to my blogroll. Usually they get transferred over once I'm happy they're constantly blogging vs being one-off bloggers. My first encounter with Su's amazing blog was when I googled, "bull's eye cheesecake". She made these ultra cute pink and white bulls eye cheesecakes in the form of cupcakes with an arrow in 2006. While everyone was making the typical dark and white chocolate bull's eye cheesecake, it took Su's creativity to come up with her pink and white version flavoured with strawberries and given a mini twist as cupcakes! Since then, I have been hooked and constantly read about her budding career here - designing and decorating amazing looking cakes. 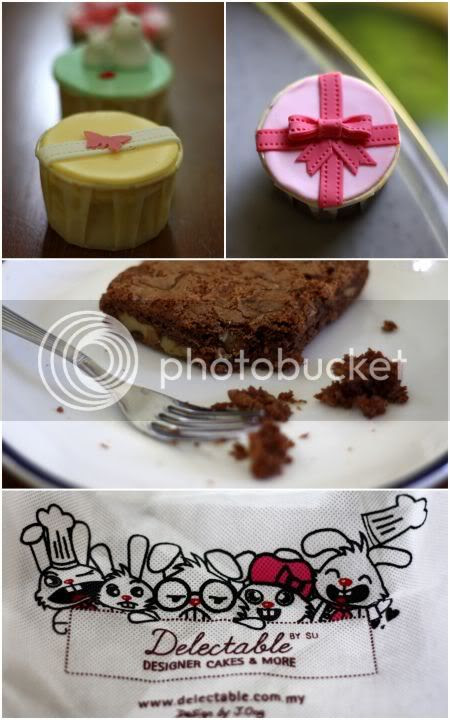 chocolate walnut brownie was crumbly and light, cupcakes were gorgeous to look and yummy to munch on and we even got a uber cute bunny bag to go

Like everyone else, I oohed and aahed over all her creations. I absolutely adored the cute penguins for Christmas and I was even tempted to order a fruit cake but decided I better not since I know no one will eat it. Hence, when I read that her shop was opened last weekend, I made it my mission to visit it and sample her goodies. 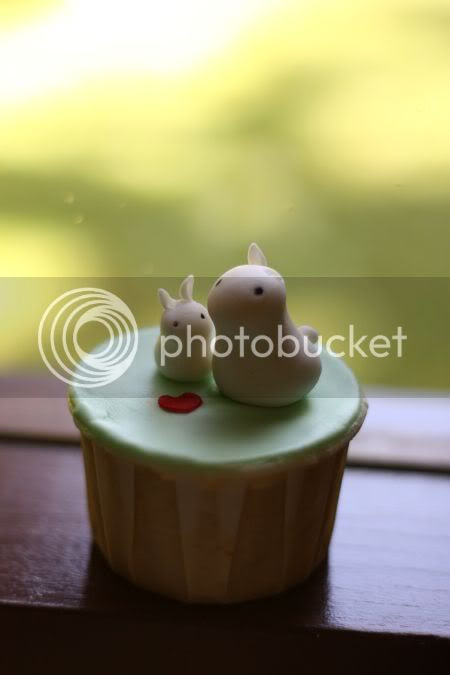 my poor bunny lost one side of its ear during the journey home, never mind it can still hear with one ear to have selective hearing...

We both felt like covert secret agents - sneakily going into the shop and checking it out. Since it was Mother's Day, she had cookies and cupcakes with Mum written on them. We saw the little sign saying "no photographs", hence there's no pictures of her adorable but very elegant shop, all dressed up in white and bright breezy yellow stripes. 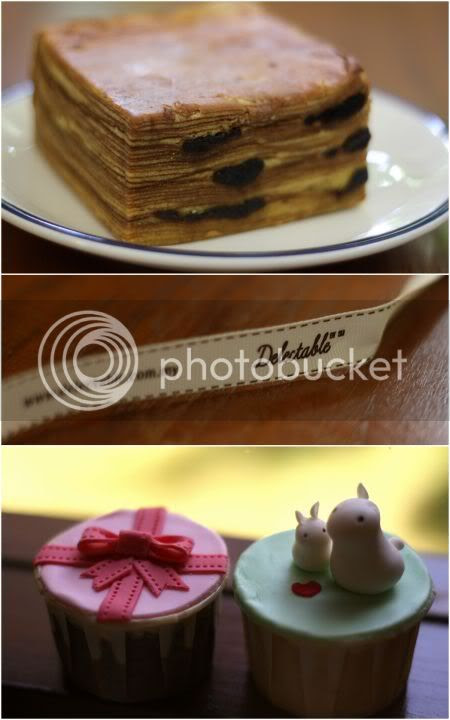 We bought as many items as we could, since we knew we wanted to try everything. Laden with our goodies, we reached home and I started snapping pictures. First, it was the cupcakes (3 for RM28) that gave me a little surprise. I was expecting hard fondant that was usually inedible on top but instead Delectable's version was soft like icing, very edible and not toothachingly sweet. Hidden underneath the soft fondant was a layer of ganache and then cake. The chocolate cake was my favourite with a soft but dense crumb. We also had the vanilla and ginger versions - where the ginger taste was nice and subtle. The texture of the cake for the vanilla and ginger ones seem a little harder though but its nice since it makes it more substantial rather than the other light as air cupcakes. I was hooked on those cupcakes - simply divine stuff and so prettily decorated with ribbons, bunnies and butterflies.

Her chocolate brownie (RM8 per piece), all tied up in a white delectable ribbon was very good stuff too. Crumbly but not dense, that made it easy to chomp down the small slice. We also sampled the prune layer cake (RM48) - a nice moist cake but I felt it lacked a little oomph like spices. I didn't get to try the cookie though, since I left it for my mother who did her quick whirlwind trip to Singapore to celebrate Mother's Day. Nevertheless, I reckon I'm hooked on her cupcakes that are simply divine. Can't believe it but we managed to chomp down every bit of it, including the tiny bunnies. Do give it a try when you're around the Gardens and hopefully you will love the cupcakes as much as we do. For more pictures, see the Flickr set.

(Pork free. Place is nearer to Robinsons side. For pictures of the store, see Su's blog.)

Hey, thanks for introducing Delectable while at Lim Kee's. Her store's just cute as a button.

So happened to be at the mall and managed to sample her cupcakes today too. The fondant was definitely unexpectedly soft and nice. Not too sweet either. What a perfect cure for Monday Blues! Will blog about it very soon.

I went ooohed and ahhed over her creations too from her website! Thanks for reviewing it :) I'll definitely drop by her cake studio when I'm back! Luv the bunnies & cute penguins she made. Btw, how was the pricing yea?

i've been curious about this place everytime i passed the area near alexis, but it hadn't opened yet the last time i was there. i checked out the website and was disappointed coz it sounded like you have to pre-order cakes instead of being able to just go to the store and take away whatever's there. but how do the cupcakes compare to bijou and wondermilk's cuppacakes?

great for us tht she decided to go retail! haha..more for us foodies to sample. I definitely sighed in relief when i read that its not too sweet..

Ooh, didn't know there's such a place in The Gardens, thanks for introducing! The bunny looks so cute, even after losing 1 ear. Awww...

wow, I will give it a try when I pass by the location next time! Those cupcakes are so cute!

qwazymonkey - yeah, I love the cupcakes as it was edible for once! Will look out for yr post and link you.

Christine - yeah, I have been eyeing them for the longest time. Summer holidays coming up also hene you can come back and enjoy loads of Msian food. Not cheap the pricing but you do get very good quality goods in return.

Sean - yeah, same like you I wasn't going to pre-order a cake! Cupcakes compared to Bijou and Wondermilk - it is a class of its own, definitely higher and tastier. I like the whole combo of cream, soft fondant and cake. My only gripe would be the cake can be a little dry I guess after 1-2 days?

thenomadGourmand - yeah, so go and support her! She's a fellow blogger too even though I've never ever met her.

sugar bean - give it a try the next time you're at Gardens.

Jean - hope you like them. They're so adorable and yummy to eat too.

So cute and tweet tweet looking!!! I don't think i have the heart to eat it...too gorgeous!

precious pea - LOL, but they taste good. So when we going for crabbies???

It's so tempting! I like prune layer cake, definitely will give it a try.

oooh, hope you like it. It was very moist.

everything looks so very sweet and pretty! girly too :)

this is special!!!
i also ohhhed and ahhhed over her blog and ur great review!
sadly, no photographs in her cake studio?!

Hahahaha.. located in my fav shopping complex! Definitely gonna check it out very soon :) since I love everything about cakes...

passed by last week and still closed, this is VERY new. :)

though slightly up market, I think. RM9 for a cupcake?

Delectable cupcakes are so nice and adorable.

ciki - too preety to eat, rite?

sc - yeah, definitely appeals to the females with its ribbons and teeny weeny details.

ai wei - you can view them on her blog. Didn't feel nice snapping pixs since she had a no pixs sign on her front.

j2kfm - Gardens mah, hence those prices but must admit the cupcakes taste was well worth it.

food promotions - yup, give them a try soon.

henny - such a waste if you don't eat them as they taste pretty good too.

It's SU!! BOO! I didn't know you had dropped by :( I would have loved to say hello. Thanks for writing this; and thanks for the support. It made my day. :) Would love to finally meet you one day; Make a point to get my girls to give me a call when you're in next! Wanna be my recipe taster? haha
I'm working on more stuff for the shelves. Chocolate truffle bombs and miniature tiered cakes were made this morning. *grin*

Lovely blog you have here... I think I've passed by before but never stopped to say hello. Well now I AM saying hello!!! :)

agnes - they're cute and yumz to eat too.

Hiya Su! What an honour that you dropped by. Sorry, we didn't catch you the other day. We must meet up. Drop me an email at boo_liciouskl@yahoo.com and lets touch base. I'll definitely take up that offer as taster as I love yr stuff.

Dharm - hi! glad to hear from you. Always nice to get a hello.

Too pretty to eat! I am curious about what you say about the soft fondant - I would have thought these would be good for show only...but you've attested otherwise... I shall check out her blog...