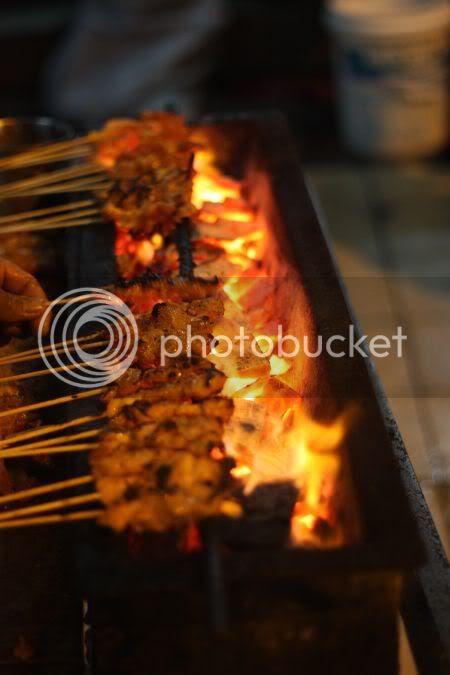 satay sticks on the grill
From yesterday's wok power, let us move on to the charcoal grill effect, which we discovered last Saturday. Having to make a stop late at night to Suria KLCC since a certain someone had to work, we picked O Mulia satay to grab a quick bite. The fellas manning the grills were putting on a pyrotechnic show, hence we both managed to grab excellent shots of their fire power. 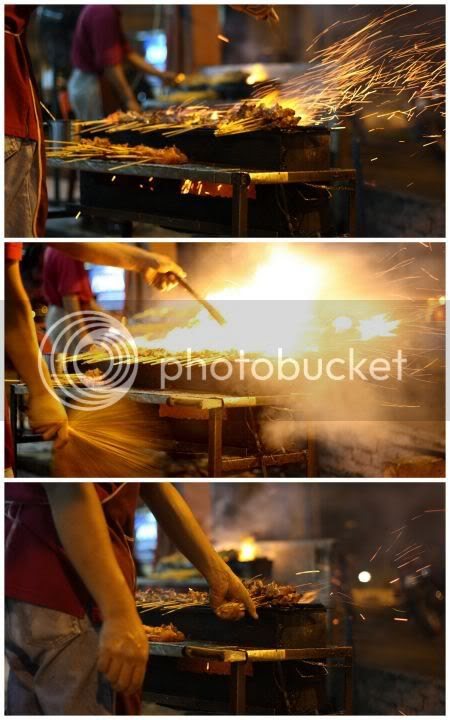 incredible fire action all the way

I've been a patron of O Mulia since I was a teenager (was introduced to this stall by my sister) and it has been a favourite stop-over for satay long before Haji Samuri became super famous and built his enormous empire of satay outlets. The wait is often long especially during peak hours but don't worry, as you can also order other items like chicken chop, fried rice and noodles, steamed or grilled cockles, yong tau foo and etc, if your tummy grumbles over the long wait. 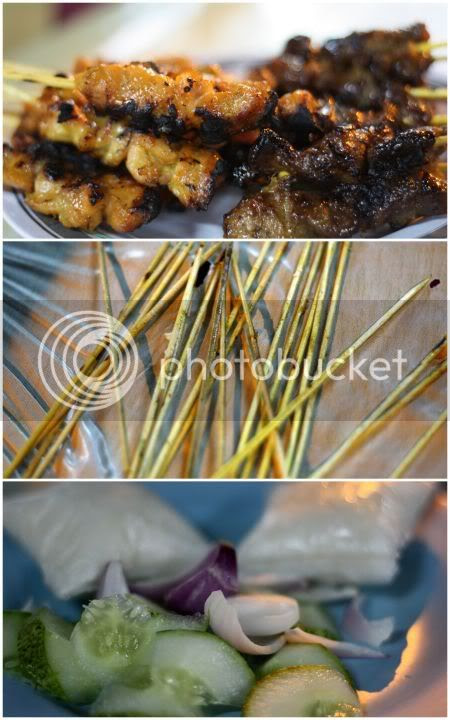 satay, pick me up sticks and a little vegetables with ketupat to make a whole meal

We prefer snapping loads of pictures of the men behind the hot grill, splashing oil with a brush fashioned from lemongrass to get the oil smoking hot. After a while, it was beginning to resemble the sparks of a Hokkien Mee stall owner. Here the satay is served in large meaty chunks with charred bits on the outside and juicy tender centers within. This makes it a very substantial meal when coupled with ketupat (sigh, I would prefer leaves vs plastic though!), cucumbers and onions. Everything is eaten with a chunky peanut sauce (way better than the watered down gunk in a certain famous satay restaurant), where you can add super spicy sambal, if preferred.

Sadly though, I had to rush through my meal at the end, as someone sent an SOS call saying their UPS died! Nevertheless, I enjoyed my chunky satay (even though the beef version was a little too charred and tough), the steamed cockles and the antics of an adorable Siamese kitten. For more pictures of everything else, look into the Flickr set.

(Halal. Open from 5-11.30pm, closed on Sundays. Each stick is 60 sens. Get the google map here. To get here, if you are coming from PWTC on Jalan Tun Razak towards KLCC, you will pass by Istana Budaya and the National Blood Bank. Keep left when you see Wisma Sejarah and Hospital Pusrawi, pass by National Library and you will hit the traffic lights. Just after the traffic light on the left hand side, at the corner is O Mulia satay. It is opposite the Marinara building and near Celcom building.)

despite having been in kl for 10 years, i doubt i'll ever be as instinctively familiar with where to eat as you lifelong urbanites are! i've driven past this place lots of times, but i've never even heard of it before today! but oh well, nothing beats my beloved malacca satay anyway. :D

wer is this place actually ? i know wer the menara celcom is but wer is the satay place situated ?

ahh.. all the posts on gd old yummy road side stalls! i like!

Excellent "action" shots of the satay :-)

this is the famed one near jalan tun razak.. recalled eating there years back. yes, very chunky satays indeed! guess it's still pretty good eh?

wow uv been busy! (and your disclaimer is getting longer and longer woman:P )

satay looks good. everytime i read your post i wonder where i will get the time the eat everthing... *sigh*

ohhh dman long time nvr had satay d...i wonder can get some for lunch haha..

I like the photos you took with the fire in action. very nice.

anyway, normally I'd go to the Haji Samsuri Satay in Uptown coz it's nearer to my place... but undeniably the satay looks promising!!!

I am put off by plastic wrapped Ketupat really preferred the weaved one-more solid and aromatic.
Nice photos.

been here b4.. still looking for a better place to bite a satay.. parking wise not that convenience. Taste.. erm.. oklah...

high sparkling fire and carbon extra black dark night is great , if only can stay till sunrise
lol !

June - added more details for you. Map and description.

thenomadgourmand - I love roadside stalls. Weird as I feel more at home there then posh restaurants.

Julian - some were taken by the "plumber who shld keep his day job".

sc - not as fantastic as before but passable when you want satay in the middle of the city.

cumi&ciki - you do it like the Jordin Sparks song..."one step at a time".

Joe - LOL, lunchtime not open. I think Kajang is open though?

eiling - thxs! Lucky you to have those French wines and buffalo meat.

shahfanaz - Sri Melaka is very good, juicy and chunky satay plus value for money leng chee kang if you don't mind the drive to Keramat. Yeah, parking is always horrendous here. Often have to park on the pavement.

bsg - LOL, all satay will be charred by then.

lol.. ok but i fear my stomach not big enough.. my watch ticks too fast:P

ok sure thanks . will be waiting for the info from u then ;) . thanks ! i love satay :P

June - directions are all up with map.

This used to be the best Satay stall in KL when it was in the corner coffee shop. Used to love the perut satay when I was in school. Is it still that good?

Used to be the best satay stall in KL when it was in the corner coffee shop. Cant remember if it was called O Mulia? Loved the perut satay when I was in school. Is it still that good?