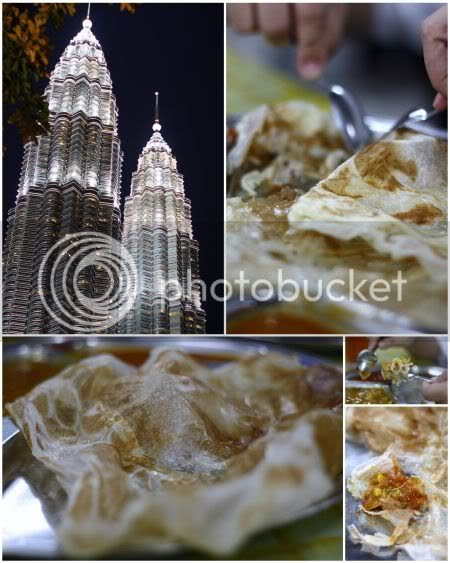 Joshua Redman rocks big time! We watched him last night at the MPO (Thanks to the Bald Eagle and Lyrical Lemongrass!) and it was excellent. I reckon I have become a big fan of his music. If you love jazzy tunes with saxophone, bass and drums, it is your last chance to catch him tonight at the MPO. Believe me, you should not miss it.

Despite being very "filled" with all that great music, the tummy was craving for something else, i.e.roti canai at that late hour. It was been ages (I reckon about 12 years ago) since I dropped by Valentine Roti at Jalan Semarak. Ironically, I was introduced to this place by an Australian expatriate who lived around the Bukit Tunku area. Being so long ago, I have vague memories of good roti canai here and was surprised to discover how incredibly good it is.

Here the texture of the roti biasa extra garing (crispy in Malay) is similar to the fluffy stretched out versions you get when you order roti planta. However, unlike roti planta, this is non greasy hence it is a crispy, light and fluffy version (90 sens per piece). I also loved the dhal, sambal ikan bilis and curry sauce they gave on the side. We enjoyed it so much, we had to order an extra one more to share between both of us. Aside from rotis, they also serve mee goreng, nasi lemak in packets and etc. While it is different from Raju's roti canai, I like this especially late at night when I want something light but not too filling.

(Pork free. Open from 4pm to 2am daily. Place is diagonally opposite Wisma Celcom and along Jalan Semarak or Gurney Road. Can't miss the brightly lit stall on the side of the road and their sign that claims they are the best roti canai. Turn in from Jalan Tun Razak and make a u turn to get to this stall.)

Other reviews:
Posted by boo_licious at 12:50 AM

Oh, so this place was nominated for best roti canai? Gotta put this in my food-to-eat list. Thanks for the information. A good supper after some good music, really enjoying! =)

Ah memories, I haven't been in a lonnnnnng time. SInce 2007 according to my blog! Eeek!

thenomadGourmand - didn't know they got nominated! Their version is different from Raju's though. I do love the Raju version esp when we ask for extra garing as it is super crispy.

Jules - yes, the best ever combo. Go see him as he is definitely worth it.

Paps - time for you to revisit as it is near your place too! Nice catching up with you at Zara yesterday.

I am risking deportation but recently I have come to terms with my intense dislike for roti canai. I am as sad as I am ashamed... somehow once I hit 30, my tolerance for ghee hit the negative!

550ml - LOL on that ghee aversion! You better avoid Indian sweets also as they're laden with ghee and more ghee.

drive all the way from PJ just for a piece of roti Canai??? hmmm....

leo - hahaha, maybe not in yr case! Do when you're in KL, ok? must save petrol with the prices.

ah, i havent been here in YEARS, i think since i worked in that ministry further down the road on semarak. looks good!

strangely, I like my rotis a bit chewy, a tad crispy, but with enough substance. meaning to say, not too garing.

but dhal + sambal + curry works wonders ... nowadays quite a number of mamak stalls are working that combination.

fbb - aiks you worked there b4? I remember going for meetings there with the minister though.

j2kfm - for chewier texture, I think Raju's will suit you better. This one has a light as air feel to it instead.

i have yet to try good roti canai in town, maybe i'll give this a try and see they can cure my needs for good roti. Btw, where is Raju?