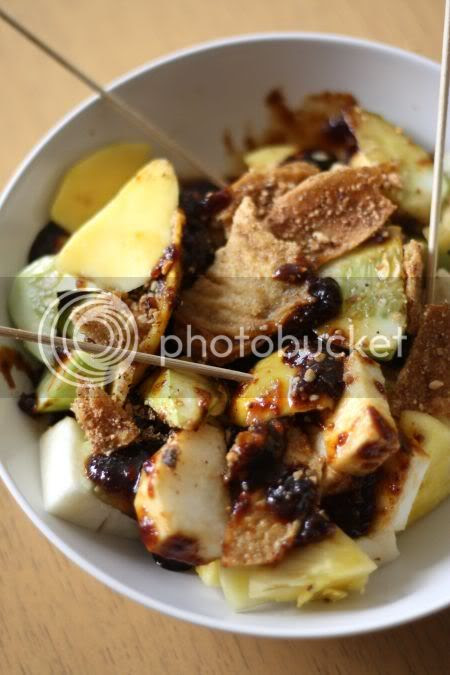 addictive fruit rojak that you can keep eating every day

Those from Kedah or up north, would have heard or tasted Mak Bee's rojak sauce - a household name since it started out in 1979. This thick rojak sauce is highly sought after by the locals who have migrated over to the Klang Valley like Adly of Fried Chillies (Congratulations to their team as their street food video has been picked for the New York Food Film Fest for June 2009!!!). When he heard Splashie Boy knew the current proprietors of Mak Bee's, he quickly ordered 5 containers of that prized rojak sauce. I also jumped in and got myself 5 containers, thinking it must be damn good for Adly to put in such a large order. 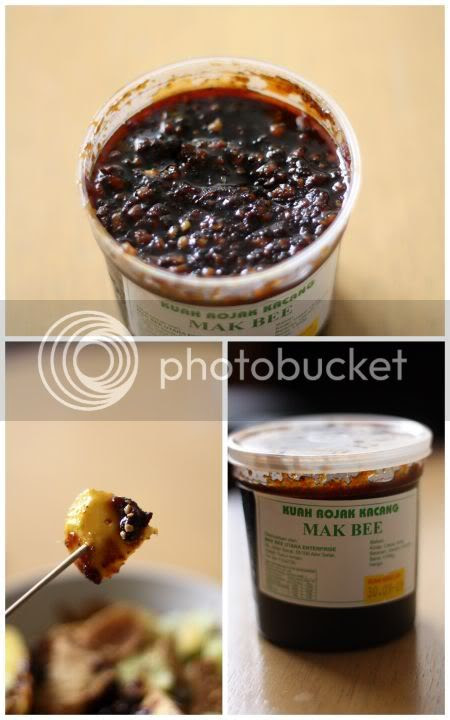 it is all in the sauce; made from belacan, chillies, soy sauce, sugar and peanuts
After procrastinating for a few weeks, I decided to give it a try by buying a selection of fruits from the nearby stall. The stall proprietor thought I was real weird I didn't want any sauce with my fruits - a mix of pineapple, yambean, cucumber, guava and mangoes. Oh my, how I wished I had tried it earlier as the thick, sweet, peanut laden and spicy sauce was so addictively good. Yesterday, my colleague gave it a try and she kept asking for more! So much more, that she even ventured down to the canteen to see if she could get some fruits to go with the sauce. We reckon, this indulging in fruit rojak made from Mak Bee's amazingly good rojak sauce is going to be a daily ritual. Slurp!! More pictures of the rojak are in Flickr.
If you wish to get your hands on this amazing rojak sauce (we bought each bottle at RM3.50), their distributor, Pak Lang Dodol is at NS. 32, Lorong Kelapa, Central Market, Jalan Hang Kasturi, Kuala Lumpur. The place is open daily from 10am to 9pm. Alternatively if you want to make bulk purchases contact Rue Jacque Enterprise by emailing them at ruejacque@gmail.com or call Aslan Abdullah (013-392 5005) or Nadiah Abdullah (019-6625005).
*Disclaimer: The opinions expressed here is entirely based on my personal tastebuds and may vary for others. This review is time sensitive; changes may occur to the place later on that can affect this opinion. The reviewer also declares that she has not received any monetary or non-monetary compensation from this place for writing the review.
Tagged with: Malaysian Food + Rojak
Other fans of Mak Bee's:
Posted by boo_licious at 12:20 AM

too sweet or not?

Not so sweet. If we have a potluck, will bring some over. Drats, can't have my fix this afternoon, today I have work outside of the office.

i feel that dipping the cut fruit in the sauce individually taste better than pouring it all over the cut fruits.

foodbin - true, that will be make sure every bit of the fruits have a sinful dollop of the sauce. I found mixing it to be quite good too, as the liquid from the fruits thins down the thick sauce.

i bought this rojak sauce from alor setar before. quite a good one but i prefer those from penang :)

haha..i laugh because my family(my grandma on mum's side is frm alor setar) have been eating this rojak sauce since forever!!
our HUGE extended family pass this sauce to everyone of they happen to buy lots of it..

but due to my allergy to seafood(there's belacan in it) it tend to make me a wee bit itchy..though it's very very yummy..I love eating it with crunchy guava...:)

Some unripe papayas and fried crullers would be yummy too!

my god... I forgot how long I have not eaten rojak!!!!
How come everything is located in downtown KL area??? sigh... have to drive all the way from BU just for a few bottle of the famed rojak sauce. I guess that's the sacrifice to be made for good stuff... heheh!

i only like mine with prawn crackers. delicious stuff. there's one in Ipoh, at Ipoh Garden Curry Noodle shop in Psr Puteh.

Hahaha! Good rojak sauce = daily ritual? I totally agree with that! There was a rojak stall in SS2 which I love a lot, too bad they moved. Would love to try Mak Bee out some time.

plus.. a lot of food that tasty in alor setar..

Allie - yeah, this one is a little diff with the peanuts inside. Usually the chinese ones add peanuts later but it's still very tasty.

ai wei - ooooh, penang ones must have even more prawn paste hence the taste is very pungent. This one suits me fine hence I can't get enough of it.

glad to hear you're a fan Liyana! High five as I love the sauce too.

bangsar-babe - ah, I need to go get a Chinese rojak stall mix then and I reckon it will taste fantastic.

leo - I think they picked a central location hence the KL outlet.

j2kfm - yummy stuff I can imagine that!

sugar bean - well, sometimes when you get crazy, this is what happens.

thxs Mouna for that offer but we can get it direct from the suppliers.

Thanks for the write up and all those pleasant comments. Mak Bee was my late mother-in-law and I’m sure she would had been delighted to know that she had made an impact in our makan-makan industry. In what was supposed to be a business that was solely meant for survival 30 years ago, the product has crossed leaps and bounds over the years and I would say it is household name for many of us.