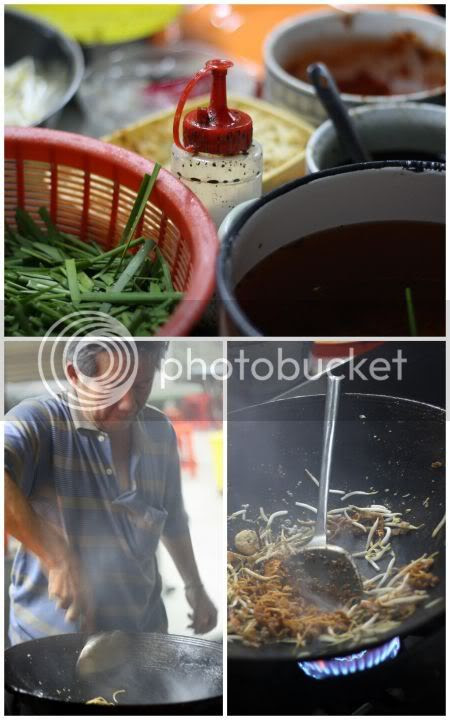 tools of the trade, uncle does it a litte differently here

The last time, I was around the Petaling Jaya old town area having a quick dinner at Heng Kee bak kut teh, I noticed this particular stall selling char kuey teow. Located right across from the busy (but not impressive) bak kut teh stall, I was drawn to how the uncle was frying his noodles - with a very short metal spatula. It also looked promising as people were hanging around waiting for him to fry the rice noodles. A little curious as always, I vowed to go back to sample those oily charred noodles. My first attempt on a Wednesday met with failure as they were closed but I struck lucky last Friday, after work. 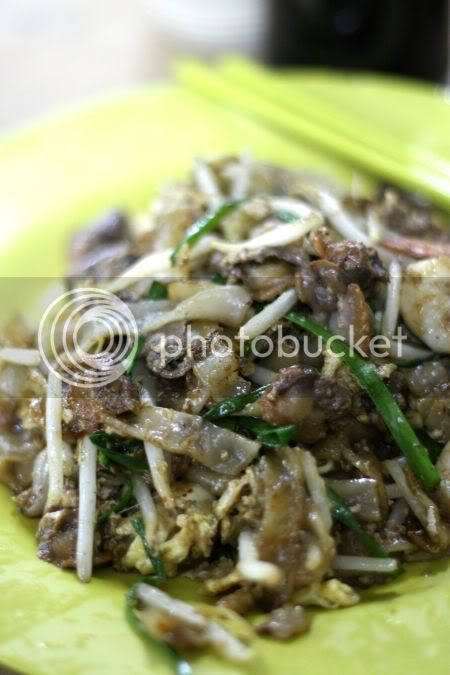 my very satisfying plate of noodles
I patiently waited for my plate of noodles (about 20-30 minutes). For some waiting can be tortue especially if your tummy is rumbling so order a snack from the roast/stewed duck stall or the economy rice stall in the same shop. The people who sat in front, obviously were newbies to the stall, as they could be seen harassing one half of the stall owners, asking where's their char kuey teow before settling down for a quick appetizer from the duck stall.
Luckily my plate of char kuey teow came quickly after that or else, I'll be complaining too. Full of wok hei (the breath of the wok), the noodles weren't too oily or wet, just the way I like it. I asked for an addition of cockles, hence you see loads of them mixed in the noodles, chinese chives, bean sprouts, egg and prawns. A quick chat with the couple revealed that they're actually the same people who also do business at the corner coffeeshop opposite the market. Seems he has been frying noodles for almost 20 years, hence he is used to the shorter spatula (easier to control, the wife tells me) and he uses the fan to control the fire. Now, I know where to get my char kuey teow fix at night, when the cravings hit. For bigger pictures, see the Flickr set.
Char Kuey Teow Stall
Restoran Soon Leong
Jalan 1/10
Petaling Jaya Old Town

(Non Halal. The stall is open from 7 to 11pm. Closed on Mondays and Thursdays. This place is located at the same coffeeshop, Cumi & Ciki had blogged about on the Ipoh Chee Cheong Fun. Teckiee also blogged about the chicken noodle soup here. Follow the Google Map to this place. It is further down from the Ipoh white coffee. From Assunta hospital, if you are coming from Federal Highway, make a 9'o clock turn, go straight and hit the traffic lights. Go straight and take first left, you will pass an Ipoh White coffee. The stall is on the same row after Ipoh White Coffee and before Heng Kee bak kut teh.)
*Disclaimer: The opinions expressed here is entirely based on my personal tastebuds and may vary for others. This review is time sensitive; changes may occur to the place later on that can affect this opinion. The reviewer also declares that she has not received any monetary or non-monetary compensation from this place for writing the review.
Tagged with: Malaysian Food + Char Kuey Teow
Posted by boo_licious at 8:40 AM

ROFL.. I just left a comment on one of Teickee's recent post about this place. Hehehe. Definitely has my vote if I have a craving @ night for CKT!

short indeed..but that would show how skilful he is and his tolerance to heat too?

wah... from the picture also can feel the wok hei!Keng!

11PM not quite late enough for late night CKT craving! Mine usually kicks in round about 3AM... much to the despair of my eating & sleeping regimen!

this is my type of CKT with lots of beansprouts and the pungent Chinese chives-thanks.

I can so feeeeel the WOK HEI from your shots :-) Cheers!

ps - Ended up at YHK Imbi, couldn't get myself to have PIG SKIN CCF at Jalan Pasar instead :-) Was very good!

oh yeah, extra "see ham" makes a big difference! that looks like my ideal version of ckt! maybe we'll bump into each other there some night ... though i'd definitely order some snacks while waiting. :D

I usually like mine a little spicier, ahhh slurps

unkaleong - great tummies think alike?? LOL. I was salivating the other day over his ckt, hence I had to return even though it took me 2 visits before I suceeded.

Joe - yup, definitely very skilful but nothing beats this old uncle in Taiping (70 plus years old) and he could make those sparks fly with his homemade fan for the fire. Amazing.

Allie - I'm envious of you, as you come from the land of yummy char kuey teows aka Penang! Any good suggestions for food? Am due to make a trip there in July and it's for fun vs work!

550ml - *hands a spatula and carbon steel wok* At that hour, please fry it yrself! I don't think I've come across 3am ones but who knows, maybe in Penang they have some?

foodbin - all my favs too, hope you will like this one.

myself - cute nick! Yes, definitely the best at that hour.

Jules - awwww, the street food place would have been awesome with the tong sui, rojak, the Winners fried chicken and etc. But YHK is also good too.

Sean - I thought I'll bump into you in some new restaurant instead? I just read Pacifica's review in Appetite; gosh the prices are so staggering expensive, I reckon I need to ask for extra credit limit from Citibank before I even venture to dine there.

KY - oops, me non spicy gal so you ask Uncle to tambah chili for you kaw kaw ok. Btw, they're both from Penang too, as they had to close the stall for 3 days since they had to back up north.

I love my CKT to have lots of cockles, and tambah pedas too! =D

His hand must be immune to heat, it's so near the wok!!

funny having a shorter spatula to fry the hundreds of plates of CKT nightly.

his hands, must be resistant to the heat.

but the colour of the CKT is kinda off, was it?

Good for late dinner when I got to PJ Old Town to visit my maternal relatives.

Spotted this stall ages ago but each time I walked out from Heng Kee with a full stomach. Must make a trip there just for the CKT, then only BKT.

yeahh the colour was kinda black i tot, but then saw ur comment that u ordered without chilli. From Pg one ah? goodyy..

Bangsar-babe - I'm ok with the cockles but definitely not a spicy person though.

j2kfm - no chili paste in that version hence it is black instead.

precious pea - now you have all the time in the world to explore before you go Down Under.

thenomadgourmand - yeah, not reddish since I don't take chili.

boo_licious said...
This comment has been removed by the author.
7:41 AM

tried looking for it through the blogs... kinda confusing... had to go there and ask an uncle... man!!... was he excited to tell me where is the famous CKT located...

make the adjusments and go figure...

My conclusion... its like KFC... delicious, heavy, but you cant have too much of it...

but all is good... the aunty, the uncle... the shop people... NICE old style environment... thanks for posting this up..