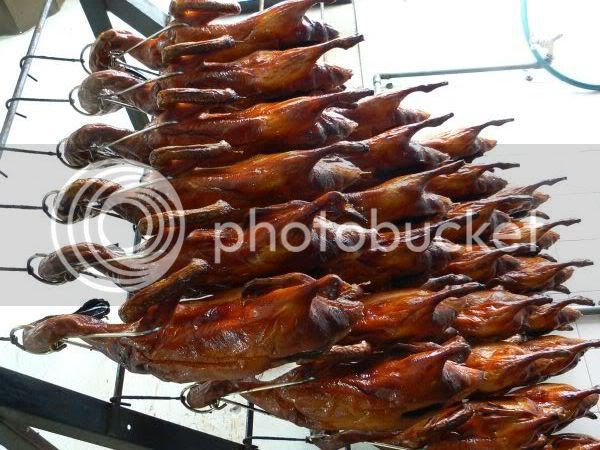 Last Saturday, I had the honour to join the "duck convoy" to Klang to sample the yummy roast duck which WMW has been blogging about. Aside from tasting great duck, I also met up with Lyrical Lemongrass and Precious Pea. Somehow it turned out to be a fun girls' outing which was good since Splashie Boy was sweating it out in his company's charity treasure hunt to Port Dickson. 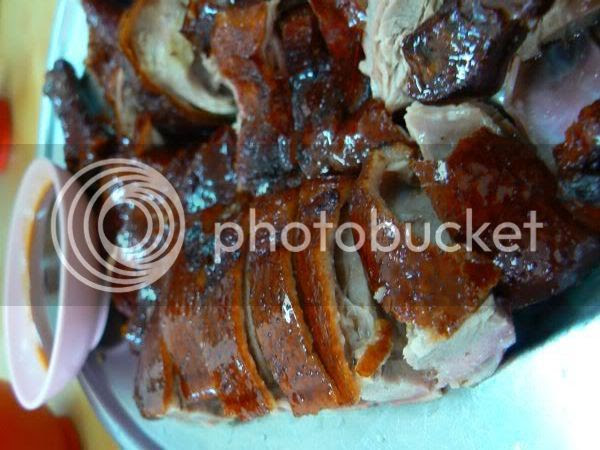 It's not too hard to find this place, as long as you pass by the Klang Hospital, make a right at the first traffic light. The restaurant is actually at the row of shophouses on the left hand side but because of the road dividers, you need to go vide the back roads through the housing estate to get there. WMW was obviously a regular here as the owners were beaming from ear to ear when she heard more food bloggers visiting her place. They serve duck the whole day from morning till evening hence the huge amount of ducks displayed at the back kitchen. Usually most shops will roast their ducks as and when supplies dwindle. At the shop, their trick of keeping the skin crispy is to pour boiling hot oil over it as and when an order is placed.
We shared one duck which came with a thickish sauce made from soy beans (tau cheo). For extra kick, the restaurant had also added a tinge of chili to the sauce. Tastewise, I felt the duck was nice and juicy. Even though the skin had been poured with hot oil earlier on, it wasn't oily and not fat. I forgot to ask them how much they charge for one duck but per WMW's post, it's RM32 per bird. One thing I did notice is the duck here is relatively smaller compared to say Loong Foong's which has more meat. 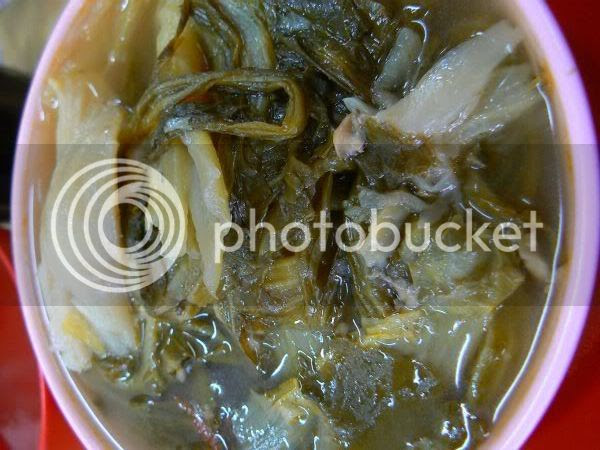 We also ordered the kiam chye arp - salted vegetable cooked with the leftover duck bones and meats, dried red chilies and flavoured with assam (tamarind). Although it wasn't thick, the vegetables gave our tastebuds a tingling feeling as it was quite spicy.
Restoran I-Po
No. 180, Jalan Batu Unjur
Bayu Perdana 1
Klang
Tel No: 03 - 3324 2295
(Non Halal. Closes on Wednesday. Restaurant is open from 8.30 am to 5 pm. On Saturday and Sunday, the ducks are usually sold out by 3 to 4 pm)
*Disclaimer: The opinions expressed here is entirely based on my personal tastebuds and may vary for others. The reviewer also declares that she has not received any monetary or non-monetary compensation from the restaurant for writing this review.

ever since i tasted bayswater roasted duck..i have been in love with duck..i was meant to try out this place..my gf told me she will bring me there...now i am waiting..with patience..

someone who is constantly craving - can't compare bayswater roast duck with local roast duck. Reason is because the duck they use is better grade and it's a meatier duck. Kinda like comparing an apple with an orange situation. Hope you can get to try this one day.

Sounds like a great weekend u just had. Happy happy belated b'day, masak-masak!

tummythoz - it was good fun. Thanks for the greetings!

I just posted up mine, together on Leo's and Meng Kee. Had a great time makaning with you girls. Looking forward to the next.

You know, there's a nice duck place in Taman Connaught, same row as the Domino's Pizza.

Anyways, how do I contact you ar? Got some questions for you. :) my blog got my email.

I had great fun with u girls! Haven't laughed this much in a long time. Shud do this more often huh? I loved the crispy skin of the roast duck. Thumbs up.

I heard the Nasi Lemak near the I-Po is very good as well. Yet to try it myself though.

Glad you enjoyed the food! So, will you go to Klang again for the roast duck?

precious pea - so efficient, put up all three!

ddonkey - oooh, I like that one too. Email me at boo_liciouskl@yahoo.com.

tankiasu - yeah, must go back and eat that plus the tong yuen which opens only in the evening.

wmw - can no problems! We have to anyway as we want to sample the famous tong yuen and nasi lemak.

kenny - yup! You missed those gorgeous duckies. Never mind, another time I guess.