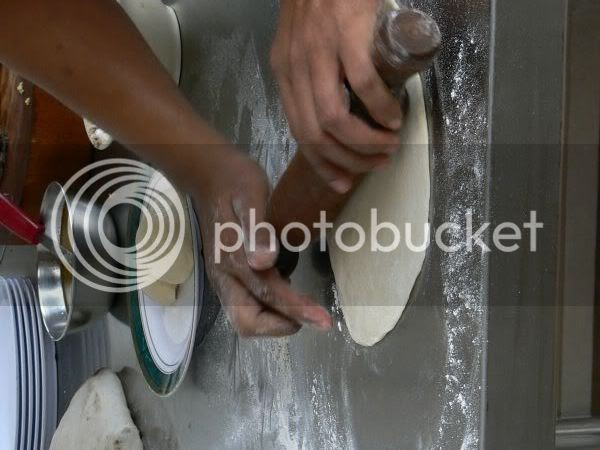 I absolutely love exploring the city for great eats and sometimes when I find little treasures, it's hard to keep my excitement down. Although I can be traditional most of the time, I love eating new things hence this place called B'Sentral was such a great find. The draw of this place is they serve unusual items like claypot briyani rice, roti romali and goat's intestines.
Let's kick off with the Northern Indian specialty, roti romali (RM3). It sounded too good to be true - roti canai without any oil. Since they make the roti romali at the front of the restaurant, I managed to snap pictures of the whole process. First, balls of dough made from wheat flour and maida (refined wheat flour) is mixed with water and ghee. They are left to rest as it helps the dough to be elastic. The man will sprinkle flour on a clean surface and roll out a ball of the dough till he gets a round disc. 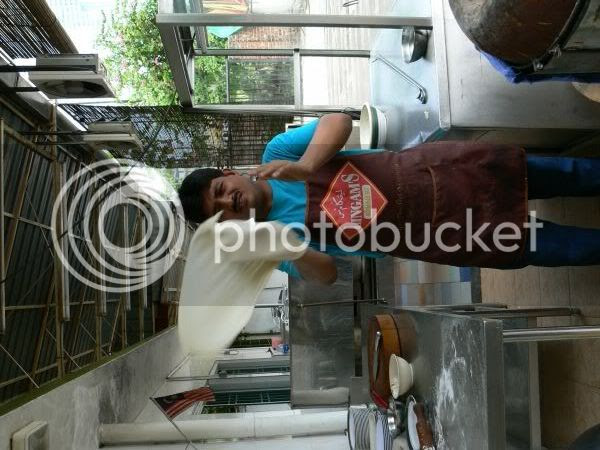 Now comes the fun part of making this roti romali, he stretches the roti romali by throwing it around. As he swirls and throws it in the air, this motion stretches the dough to make it paper thin. 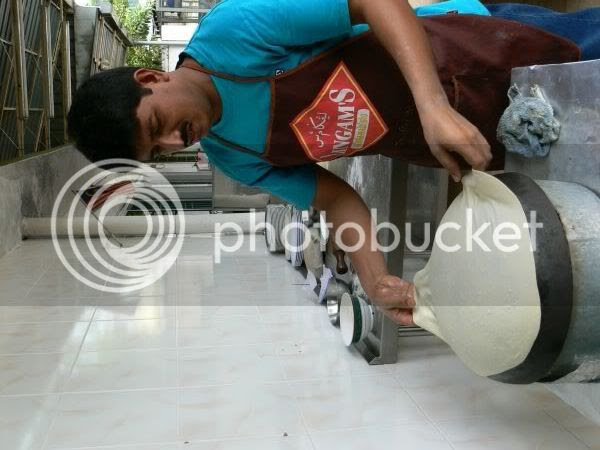 It's then placed on a cast iron wok which is heated by a gas stove. This has no oil and the dough is paper thin like tissue. 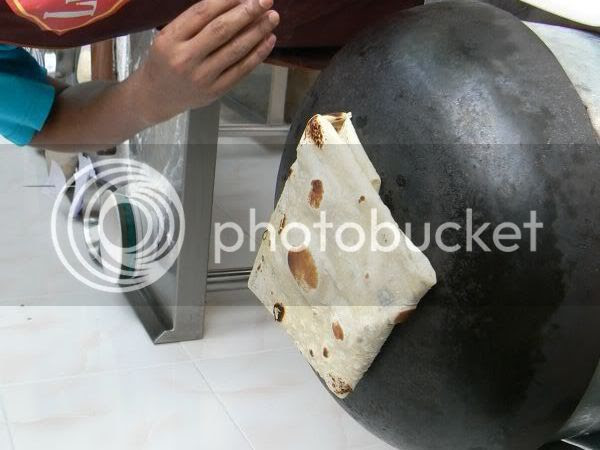 After a few seconds on the hot cast iron surface, it will be cooked with patches of brown spots all over it. The man will quickly fold it on top of the surface and remove it to be served. Tastewise, it's like roti canai and it's paper thin. A bit pricey though we felt for just flour and water but I guess the owner pushed the price up since it's unique. 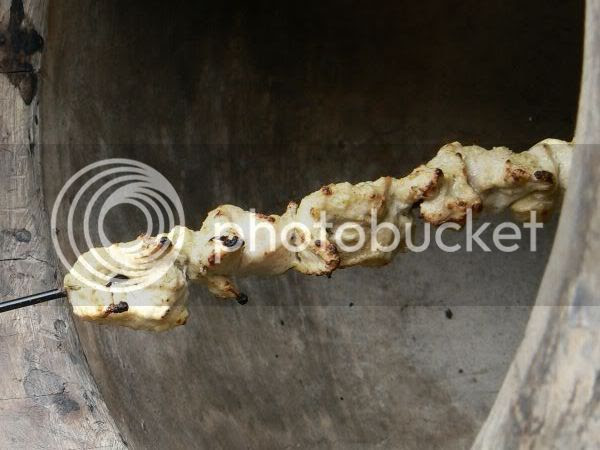 Next we tried their Hirani Kebab (RM10.50) which is marinated with yoghurt and cooked in a tandoor clay oven. 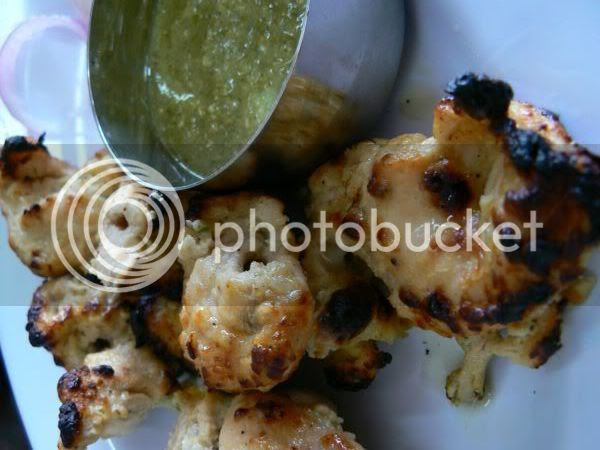 Unlike the normal tandoori chicken, the chicken is pale in colour but really juicy and succulent. Excellent with the mint dip. 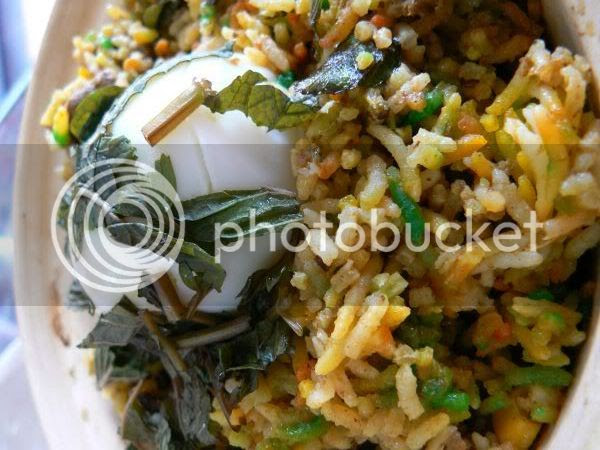 Another specialty of the house, claypot briyani rice (RM9). There are a few varieties - mutton, chicken, seafood (prawn and sotong), vegetarian and rice. Although it's technically not cooked in the claypot, it's another innovative way to serve the briyani rice. The rice is cooked seperately and then added to the heated up claypot. The rice is fluffy and fragrant while the mutton which we tried was tender. They top it with a hard boiled egg covered with mint leaves.
Aside from all these we tried, I've heard good things about their goat's intestines. It seems it is highly sought after as it's rare for a place to serve it. Only available on Saturday though hence we didn't manage to sample it. They also serve deer meat and various curries. Do take note of the unique front entrance of the restaurant. The floor is decorated with wooden sleepers salvaged from railway tracks.

*Disclaimer: The opinions expressed here is entirely based on my personal tastebuds and may vary for others. The reviewer also declares that she has not received any monetary or non-monetary compensation from the restaurant for writing this review.
Tagged with: Malaysian Food + Briyani Rice
Other reviews:
Posted by boo_licious at 12:00 AM

Hmmm. The last time I went there, they definitely didn't have all of the above! This must be their new management. The hirani kebab looks tender and juicy.

Great pics Boo, especially of the man making the romali. Did he posed for you? Hirani kebab looks good too!

Been there once with my friends. But we walked out after reading their menu as we feel they charge exorbitantly. :-P

No doubt about the quality & taste though, as my Indian-food-lover friend passionately testified to me.

lemongrass - didn't know they had a new mgt but the owner was pretty friendly.

wmw - The briyani was good, was just enough for both of us so we were quite happy.

precious pea - nope he didn't pose for me as he had to make my roti romali which I ordered.

tankiasu - prices are high for certain items like the roti romali but that place was packed on Sunday when we ate there. Yup, the taste is good too esp the hirani kebab and briyani rice. I must go back and try the goat's intestines which they say is very good.

the roti romali man must be veli excited to show off his roti throwing skills to u. Rm3 for one roti seems to be rather expensive but anyway, it is oil-less so worth the try.

Goat intestines? Definitely a first for me. I can't take mutton smell, wonder if it's as bad. Do update soon.

(off topic) hey, you know your blog (alongside others like lim kit siang, cheeserland, fireangelism etc..) is featured in this month's KL Lifestyle. Another one eh? ;)

How lucky you are to see such things. That makes me so hungry. I love these pictures you take. :):)

wow! yoghurt chicken... got to try this

xiu long bao - I think he does the whole thing usually when he makes the roti anyway.

tummythoz - hmmm, if you're sensitive to smells then better not give it a try.

sher - thxs and I love those upsie and sundance stories. I got Fluff to write this time.

teckiee - hope you get an opportunity to.

deanna - think they had a write up in the Star paper last week. To search for blog reviews, go to Google Blog Search. Coincidentally they just dropped a brochure at the front gate just now - Nyonya food this April.

yum, just the sound of the food available at this place is making me hungry despite the fact i'm already stuff!

feel like coming there lookin at those pics
luv fried spinach too ;)

Went to try this place on Saturday after reading about it on your blog.

It's SO YUMMMMMYYYY!!
The claypot briyani is fabulous.

Roti romali was good too, but only when it's warm. Once it's cool it tastes a little like raw pan mee. Hee hee.

Only had tummy space to try these 2 things. Must go again. Slurppp.

elb - can keep this in mind when you return from London town.

wandernut - am glad you liked it all even though roti romali got cold. Guess you were savouring the yummy briyani too long hence you ignored the roti. It was the two of us so we finished it quite quickly but thanks for the word of advice on the cold roti.

no i didn't.. wonder whether its kenny sia or the ed herself! :p

boo: actually, a lot of the food I see in here is making me hungry I must say. I have a lot to catch up on when I go back! :P

jesscet - okay. Yeah, lots of references to Kenny Sia but I'm amazed at some people's daily hits! Mine's only 10% of theirs.

elb - never mind, you make us drool with the Brit food which we can't get here.

It looks so delicious it seems the same technique like making a pizza but I'd like to prepare it with a chopped Generic Viagra inside of it.