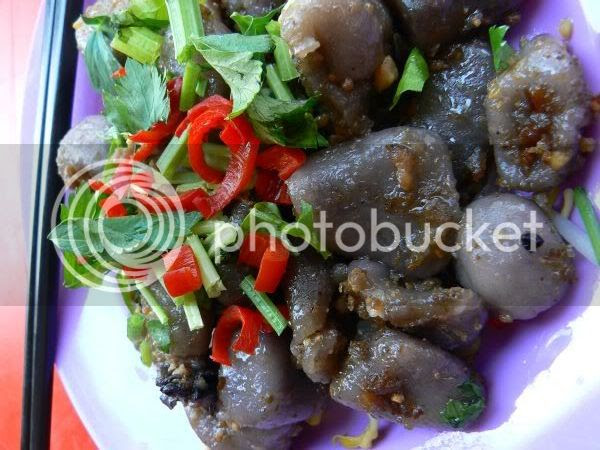 I'm in a purple mood today! Yesterday, it was sweet potato noodles and today it's Hakka Abacus Seeds. Incidentally, I was discussing with my friend on yesterday's noodles - I had one written and published reference which said it was sweet potato noodles while she reckons it is tapioca noodles instead. Guess it warrants further investigation so I'll update all of you once we confirm. Apologies to all.
These abacus seeds are easier as there's lots of references about it. A popular Hakka dish, it's made by mixing steamed yam (taro) and tapioca flour. They're shaped into tiny buttons to look like abacus seeds (suan pan ji). Subsequently these seeds are then cooked in boiling water and drained. To give it flavour, it is fried with dried shrimp, vegetables or meat. At this particular stall, no meat is used when frying and they serve it with blanched bean sprouts, chopped red chilies and coriander leaves. A dash of chili sauce is added on the side for extra kick.
Tastewise, the yam seeds are slightly chewy and can be an acquired taste. I like them with lots of dried shrimp and lashings of chili sauce. Aside from these abacus seeds, this stall also serves delicious Sarawak Laksa which I have reviewed before.
Nam Chuan
2-4 Lorong Ara Kiri
Lucky Garden
Bangsar

(Non Halal. The stall is open from morning till lunchtime. Closed on alternate Wednesdays)

I love these. The "good" ones should have a little chew and bite in them. I'm not a fan of the soft, mushy, floury sort. My preference is to have them fried with a mixture of dried shrimp, preserved vegetables and lots of fatty minced pork =D

i always buy these at the cheras market from the vegetarian stall..yeah its damn addictive as its chewy and at the same time delicious..

I tried once..probably bought from the wrong place..turned out soft and lembik. From then on, I dare not try anymore cos I thought it was supposed to be like that. Guess now my perception has changed. Thanks Boo, will try it out soon.

Haven't tried this before despite having been to Nam Chuan for many many years! Time to rock the boat. haha. Looks yummy, but I think can quickly get jelak oso.

weii, next time u go nam chuan, call me la. i love eating there.

This is a favourite of mine. My mom's Hakka and I get her to cook this for me once in a while,but of course she gets the abacus seeds from the market (I wouldn't want her to do too much work). If not, I'll get my fix for this at Nam Chuan (center plate in addition to my order of Sarawak Laksa! Yippee!)

Tried d homemade as well as those sold outside a few times. Have not acquired the taste. (-_-)

boo,
you can buy the kosong shin pun xi from the ss3 pasar malam.

Aah! Something new to try! I've never had this before and it sounds really tasty

d - this one was a nice texture. Not too soft.

someone who is constantly craving - looks like you crave these too.

sc - lucky girl. Homemade ones are the best.

precious pea - yeah I have had those softer ones. Not that nice but easier to eat.

xiu long bao - I've eaten long pan made by my aunt. It's somewhere in the blog under Hakka Dumplings.

fbb - I thought too far for you since not walking distance from yr office.

wmw - such a good idea, two yummy foods at one go.

what a lulu - really? Didn't know this, which stall is it. I don't think I have seen before. I have seen it once in Paramount Garden's pasar malam though. Different variety as it's paler in colour.

sharon - hope you get to try it.

oh, i have blog the hakka abacus post not long ago too.
http://www.gourmetgarden.com.my/?p=4655