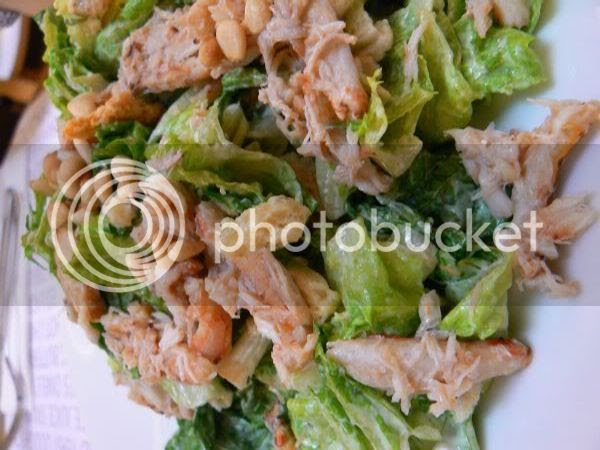 I was in Singapore last week for a whirlwind trip. Not much time to do anything but I did manage to get one leisurely meal in and caught up with old friends. It was great fun. I've read quite a lot about Marmalade Pantry hence we were keen to try there. It was actually a toss up between Brown Sugar and this place but Brown Sugar sounded difficult to locate. Going through the past reviews by bloggers and other websites, I guess it's very much a tai tai's hangout as I remember observing during my lunch the high proportion of ladies versus men there.
I must admit I expected a closed restaurant but found it was at the basement of the shopping centre where you could sit and observe the on goings at the shops circling the restaurant. Seats were comfy as we got the central highback leather sofas. They serve bistro type food similar to the concept Delicious by Ms. Read. The menu is pretty extensive and nothing fancy - just white paper held on a clipboard. 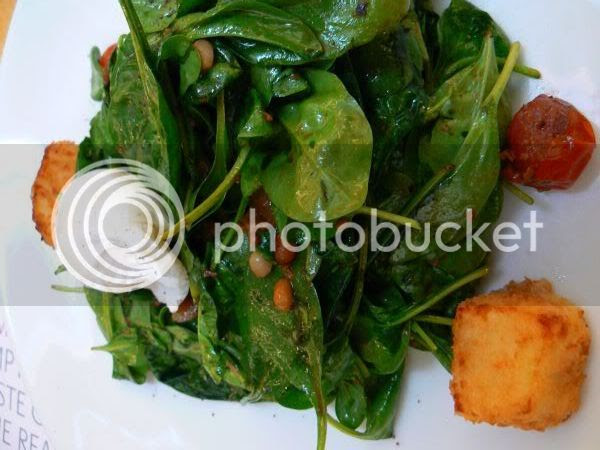 The salads here are pretty substantial. My friend S had the Crab Caesar (S$18) - romaine lettuce tossed with caesar salad dressing, fresh crab meat, parmesan cheese and pine nuts. Pretty good stuff and unique. The crab meat was a nice addition as it's light versus the usual chicken toppings for caesar salad. I ordered a salad to share with another friend - the Warm Spinach and Roast Onion Salad with Bacon and Mozzarella (S$18). This was really good stuff, the spinach leaves were nicely flavoured with the sweet roast onions and bacon bits. Topped with a poached egg and a sprinkling of pine nuts, we really liked this a lot. The only thing I didn't like about this particular salad was the slightly too dry deep fried mozzarella cubes served with it. 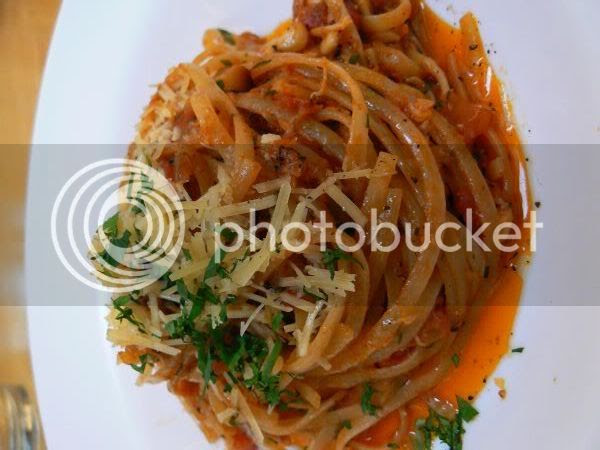 I wanted to try the Linguini with Crabmeat Tomato Chili and Pinenuts (S$19) after reading recommendations from other sites. Portions were really substantial - chunks of crabmeat mixed with the slightly chunky tomato sauce. It was good stuff but I felt the subtle taste of crabmeat was overpowered by the tomato sauce. 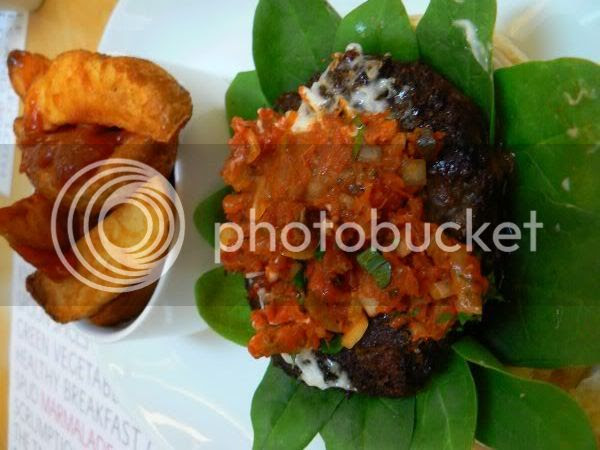 Another friend, S had the foie gras burger with sun dried tomato relish (S$24) which was served with potato wedges. Must have been really good stuff as he cleaned the plate up. 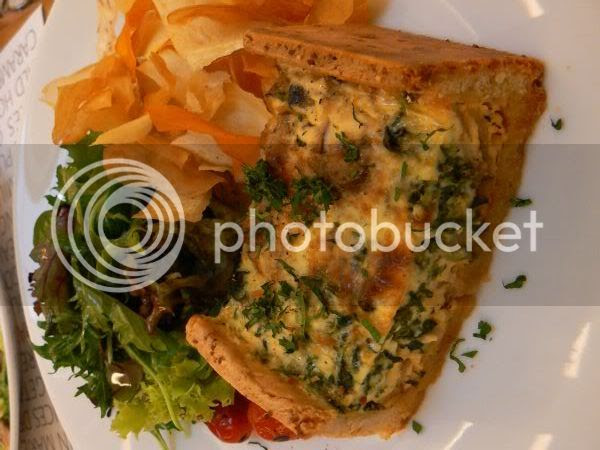 Another friend, A had the Wild Mushroom with Spinach and Truffle Oil Tart (S$8). Took quite a while to arrive but it was nice and hot. Served with fried potato shavings and a salad, the tart was good. I stole a small bit and it's nice and rich. 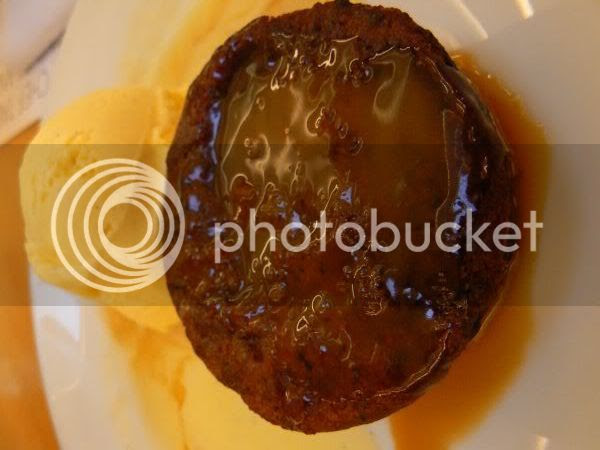 For desserts, their famous Sticky Date Toffee Ice Pudding with Vanilla Bean Ice Cream (S$10) which was pretty good. No taste of bicarbonate soda and not sickly sweet, it was really good with the ice cream. If you dig within the centre, you'll reach the soft date center. 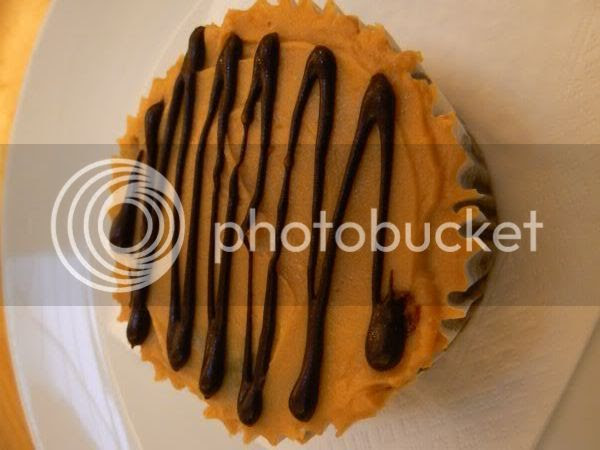 Marmalade Pantry is also famous for their cupcakes which you choose from a selection at the counter. Seems the Nutella Cupcake is popular ( we saw a group of ladies pack up all of them leaving just one!) but we chose to try the Elvis (S$3.70). Aptly named after Elvis Presley's favourite flavours, banana and peanut butter, this is essentially a chocolate cupcake with a banana inside and topped with a peanut butter frosting. The chocolate cake was rich with a nice crumb but lacked much banana taste despite it having a slice of banana at the bottom.
We had a great time here - good place to hang out and chit chat. Something for all of you to consider when you do visit down south. It seems they also do a wicked Sunday Brunch that is always packed with people. Incidentally taking Fatboybakes cue, I also visited Pantry Magic at Chip Bee Gardens. Heavenly place but had to restrain my self in buying out the whole shop so all I got was the candy thermometer and a scoop for cupcakes. Tempted to get the square and rectangle tart tins plus a few million other stuff. For those baking enthusiasts, note also that Phoon Huat is down the road from Pantry Magic. Although it's just your typical bake shop similar to Chang Tung and Bake with Yen here, we noticed the Wilton stuff they stock up here is significantly cheaper compared to what is available in Kuala Lumpur.
The Marmalade Pantry
Palais Renaissance
#B1-08 to 11
390 Orchard Road
Singapore
Tel No: 02 - 6734 2700
*Disclaimer: The opinions expressed here is entirely based on my personal tastebuds and may vary for others. The reviewer also declares that she has not received any monetary or non-monetary compensation from the restaurant for writing this review.

Tagged with: Singapore + Marmalade Pantry
Posted by boo_licious at 10:15 AM

foie gras burger with sun dried tomato relish sounds indulgent. So does the sticky date toffee pudding! Singapore has been pretty innovative with their makan places.

i think they have the market for it la. here, any such places would have folded after awhile. also, dollar for dollar, its much more affordable for the singies.

drat, i didnt know phoon huat was just down the road from pantry magic. what's a cupcake scooper?

lyrical lemongrass - Didn't get to taste someone's burger as he whacked it all!

fatboybakes - I guess we don't have enough tai tais to help bolster these places. Yup, S was the resourceful one who dragged me there. Cupcake scooper is the ice cream scoop to make sure you have even amts of batter inside it.

i m drooling..drooling badly eventhough i just had lunch..haha foie gras burger? i m dyin for more for tat sinful thing..although mine was pitiful in a form of a gyoza

foie gras burger??? Wow!!! Must tell my hubby about it as he recently developed a passion for foie gras. Who knows?I will end up in Singapore soon. Haha..wish me luck Boo.

the price is not too bad if u earn in Sing Dollar. the food all look and sound so tempting! yummy!!

someone who is constantly craving - yes, very sinful stuff.

precious pea - hope you make it to Spore to try this.

sweettooth - the food was good and company was even better.

Tried the Crabmeat Caesar Salad, date pudding .. they were good but too much sauce on mine for the Salad. It is, overall a rather expensive place for lunch. Well is a place for rich Tai Tai to lunch after a morning of tiring shopping at Palais Renaissance!

wanderlust - u're right as I saw so many tai tais lunching there and even recognised one from Paragorn which I had walked from.

What a coincedence! Am heading down this weekend and this is one of the places I will be going to. I really enjoyed the warm spinach salad the last time. Hard to find a good salad in KL. Its going to be a real eating trip so I am saving my stomach until then!

OOOoo la la...Im definitely gonna tell my sis about this place. She is in Singapore for a week. Must ask her to tapau some cupcakes. :D

i love love love the crabmeat caesar salad and their cupcakes. have tried almost all, love elvis the most (the cupcake, not the dead guy). ta-paued it all the way back to m'sia too! -sooyin-

The salads look real good. Must try this place next time I am in Spore.