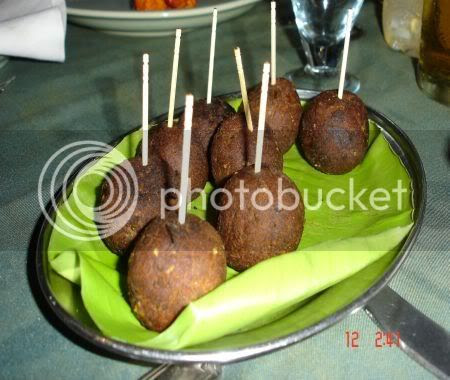 A few weeks back, Splashie Boy was in Bangalore for training. A dinner was held for the whole group at a Bangalore restaurant known as Nagarjuna Savoy which is famous for it's spicy Andhra cuisine. Knowing how interested I will be about the local food, he snapped a few pictures for me to share with all of you.

First was the Andhra Keema. What's unusual is we usually associate keema with minced lamb flavoured with spices and served with peas. Here instead of a minced meat dish, it's shaped into meatballs that have been deep fried. 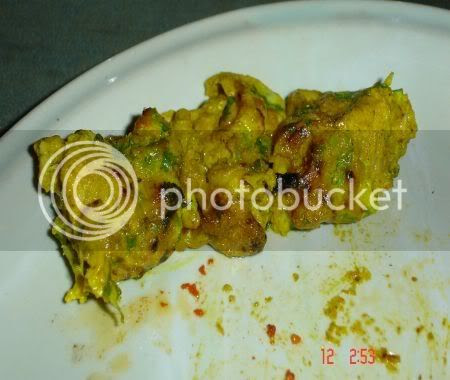 Next was the Reshmi Kebab made from chicken that is marinated in yoghurt and herbs. Unlike the tandoori chicken we get in local Indian restaurants, this one is juicy plus succulent with a sauce tinged with saffron and filled with chopped herbs. 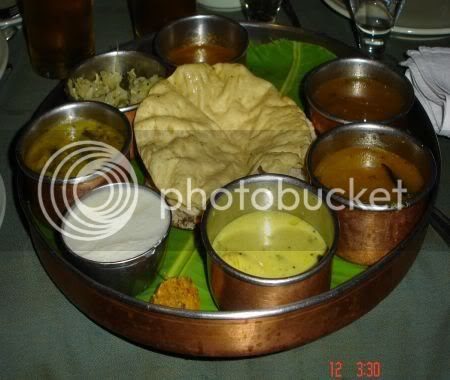 They also had the famous Andhra Thali - which is served in a metal round tray. Similar to our banana leaf rice concept, each metal bowl contains a different vegetarian item to be eaten with the mound of rice placed in the middle of the tray. There will be rasam, various vegetable curries and sambals. Yoghurt is also served to cool down the palate. 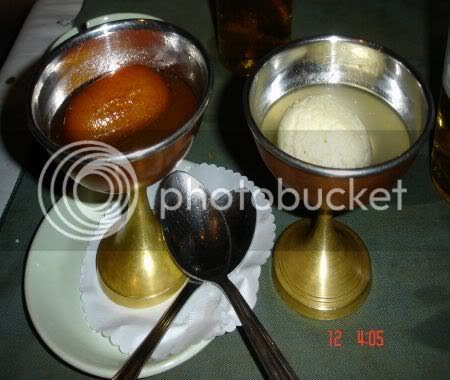 For dessert, it was the evergreen favourite - gulab jamun made with rose scented water. There was also ras/rasah gulah made from sweet cream cheese and soaked in syrup. I believe I had something similar before at Jai Hind which was really good stuff. Incidentally, Splashie Boy is so taken with gulab jamun, he even bought me a mix from Bangalore to make it at home. 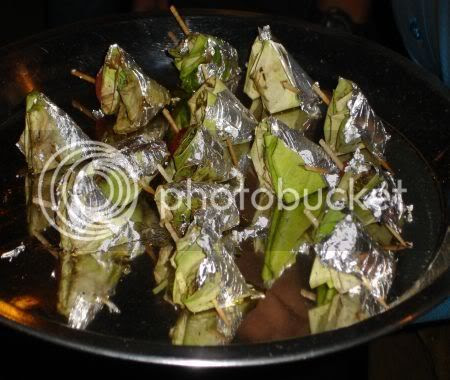 He also found something unusual outside the restaurant - Pan/Paan which is pronounced Paah'n. A sweet dessert or snack - the betel leaf will have a filling of betelnuts, cherries with limestone and gulkhand (rose leaves). Edible silver paper is also wrapped around it making it extra special.

I hope I managed to get all the names and descriptions correct. Believe me it was quite difficult since he didn't take much notes! If I got something wrong, do advice me hence I can amend it.

Hi 5, Splashie Boy! I love gulab jamun too. Do tell me how your pre-mix turns out. I bought a pre-mix here in KL once...the end results were disastrous. Served it to my in-laws - suffice to say they were very polite about it after asking me to identify what the blobs were. ;-)

Its rasagula!.... made from cottage cheese...

very nice of splashie boy to share his pics with us.. how very interesting :). i like gulab jamun too!

lemongrass - he says the mix should work since it's from Pilsbury!

leomitra - yup, I've had it before and it was so divine. Rich but so fantastic. Now I have a craving for some.

sc - yeah, he was prodding me so many times to post it. So many fans of gulab jamun. I like the black version, not too sweet.

i have some good multi cuisine restaurants in bangalore...try these if u have time....
restaurants bangalore