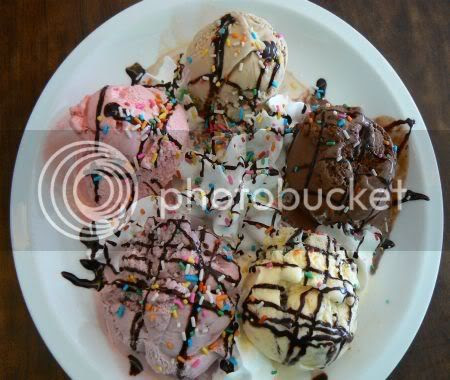 After the satisfying lunch we had at Restaurant I-Po, we were keen to try out the tong yuen place which Kampungboycitygal had blogged about in nearby Bandar Bukit Tinggi. Unfortunately we found out it's only opened in the evenings. Hence it was the next choice, gelatos at Leo's Cafe. Incidentally, we drove around Bandar Bukit Tinggi - it's huge and packed with eateries. Don't think anyone will starve around the area. Also spied the Cendol Klang mini van stall near Leo's Cafe. 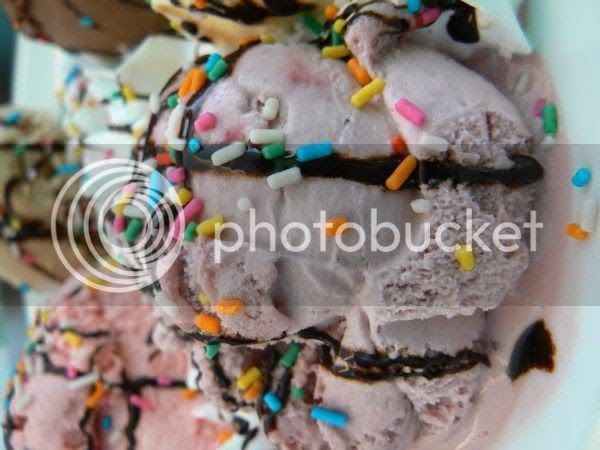 I was keen to try out Leo's Cafe. Heard a lot about it especially the one in USJ which has been prominently discussed in the USJ forum. A quick chat with the supervisor indicated that it's a chain of cafes with branches in Taipan, Seri Petaling (where the Store is located) and Kepong. The gelatos are locally made at their factory in Sungai Besi. To sample their gelatos, we ordered the Gang of Five - 5 scoops of various flavours topped with whipped cream, drizzled with chocolate sauce and colourful sprinkles. The flavours we tried was cookies and cream, strawberry, tiramisu, chocolate and mixed berries. The cookies and cream was a weird flavour - tingle of coconut oil in it, tiramisu had a strong alcohol taste, strawberry was a bit sour while the chocolate and mixed berries flavours were pretty good. All the gelatos were smooth and creamy. 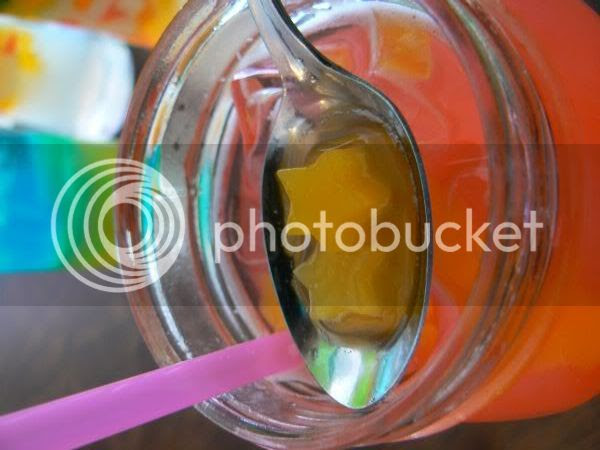 Aside from gelatos, we ordered a bevy of colourful drinks which had interesting names after being prodded by Lyrical Lemongrass who wanted to snap pictures of them. The most interesting one was Precious Pea's First Love for it's star shaped mango nata de coco. 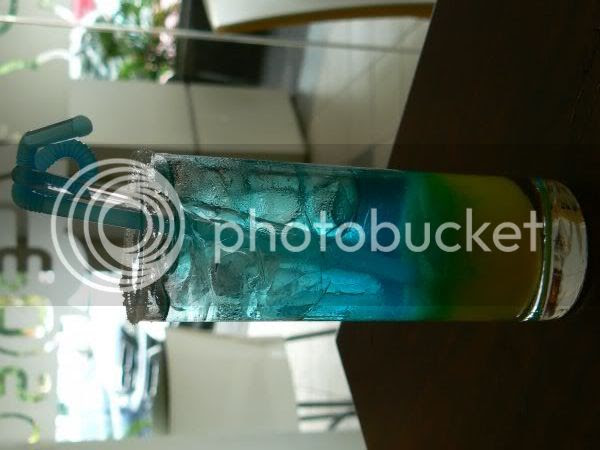 Lyrical Lemongrass went for Hard to Resist - a non alchoholic margarita in an interesting bright blue hue. It's even got salt on the rim of the glass just like a margarita to balance out the sweetness of the drink. 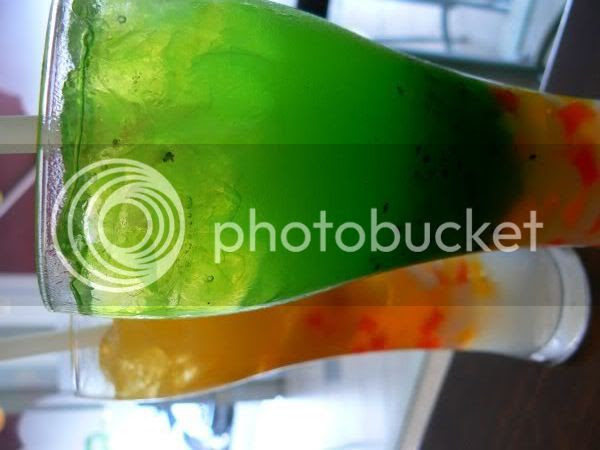 I ordered the Glory of Gold Cup which was mainly sweet mango juice mixed with nata de coco and fruits while WMW had the Top Ten Award. Made from kiwi juice, it was eyepopping sour for her. Prices here are pretty reasonable and the place is super packed for lunch.
Leo's Cafe
Bandar Bukit Tinggi
Klang
(Halal. Corner shop facing Giant Supermarket. To get here, take the second turning on the right hand side after the Klang Hospital)
*Disclaimer: The opinions expressed here is entirely based on my personal tastebuds and may vary for others. The reviewer also declares that she has not received any monetary or non-monetary compensation from the restaurant for writing this review.

Tagged with: Gelato + Leo's Cafe
Posted by boo_licious at 6:12 AM

I like the Gelato especially Mixed Berries flavour. Err..the factory is in Sg Buloh or Sg Besi? I tot i heard Sg Besi.

BTW, i was also eyeing on the Klang Cendol. ;)

Will look out for this place if I am in any of the neighborhood with their outlet. I have yet to taste a good Gelato in Malaysia...

Hey check out the Palate Palette (3 doors down from No Black Tie, http://www.palatepalette.com/) had a wonderful Sunday night dinner there. Must try is the Toasted Carrot Cake. YUM!

thxs lemongrass and Precious Pea! Amended already. Perils of writing this early in the morning

wanderlust - think best to get Italian type though. LOL! I was suppose to blog abt Palate Palette tday but since it had so many pixs, I decided not to as I was too busy to reduce their sizes. Glad you like the food there. Heard good things abt that carrot cake.

never know tat klang has so much goodies other than bkt..must make a trip down there

Once again, I'm glad to be able to provide you girls with some comic relief! ha ha ha....

Hi Boo! Wow! Leo's only just started in Taipan when I went home last Dec and they kept running outta gelati whenever I went, so I din get to try :( They look nice in the pics tho-- how do u manage to take such mouth-watering pics every time? Is there a special cam u use? Makes me drool over my laptop whenever I'm reading ur blog :P

btw i nvr knew u blog jt turned 2-- seems like i've been reading it for longer than tht! Anyhow u had my vote in the blogger's choice awards man! keep up the good work! :)

oh my.. can't wait to go back..
Next time around I'll bring u guys for Bah Kut Teh =D

kampungboycitygal - yup, lots of food there!

wmw - yup, definitely comic relief with those faces you pulled.

jun - no special cam. Just point and shoot. Thxs for the well wishes. Hope you get to sample their gelato.

swee - I'm sure this will be way below the stuff in Sydney though where it's probably real Italian gelato. BKT sounds good, when?

A warning for all who wanted to dine at Leo’s café. Please think twice before you want to go there, foods ordered are not allow to cancel even if the waiters/waitress are in fault for forgotten to serve you. Meaning you still have to pay for it. So please think again before going to such a place!!!