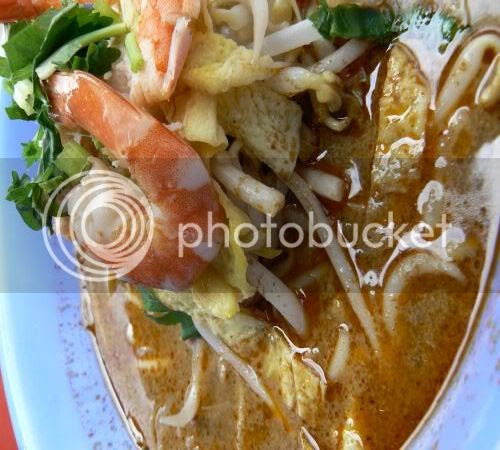 Last weekend, Splashie Boy went gallivanting away with the guys in the jungles of Terengganu. Usually when you're out in the wilderness, there's not much to do after dinner except sit around the campside and talk about anything and everything. Now these conversations usually revolve around cars and tires (yawn!) but an interesting subject they did discuss was how difficult it was to get good Sarawak Laksa in the Klang Valley from the resident expert, Paul who recently penned a few articles on the subject. I can't claim to be an expert since I've not visited Sarawak but I do love Sarawak Laksa. According to Paul, the stalls in Kuala Lumpur just don't serve them like how they do in Sarawak and if you want to taste the real thing, you have to make it at home with the paste brought back from Sarawak. What is extremely important is the santan (coconut milk) added as it can't be overboiled and must be freshly squeezed.

Since I didn't have the famous Swallow brand laksa paste but I was hungry for Sarawak Laksa after hearing the stories from Splashie Boy, I decided to try the next best thing which is the laksa found at Nam Chuan, Lucky Garden, Bangsar. Served by a lady from Kuching, the Sarawak Laksa was pretty good and not as thick as the other laksas I have eaten before. A small portion costs about RM4 which is served with shredded egg, bean sprouts and two big prawns. I deliberately took a half picture of the laksa this time so all of you can see the broth it comes it. Although it didn't really hit the spot for me, I guess it will have to do until Paul cooks his famous laksa for us (big hint!).

See the Sun's write up for the location map and opening hour details.

There's a bistro in Mont Kiara Aman called Tommy's which serves a yummy version of the Sarawak Laksa, with linguine and a good portion of sambal. You might want to check them out sometime ... happy eating!!

peetee - I love Tommy's version! So yummy and different. Are they still giving free desserts?

hey, boo, where to buy the sarawak laksa paste?

The laksa looks really yummy!
*scribbles it down on her to do list*

Hi boo_licious. Yeah, this auntie's Sarawak Laksa is okay for its price. I heard there's another one in Restaurant Gembira in Taman Megah which I haven't tried. By the way, I like to eat another dish that this auntie sells, it's called Shin Poon Chi (abacus). It's rounded tapioca flour balls (hence the name as it looks like the ancient Chinese calculating device) with minced pork, cloud ears and spring onions for garnishing. Errr....you either like it or you don't! :o)

peetee - oh no! Those cakes were yummy esp the Carrot one with the cream cheese in the middle.

fatboybakes - click on the articles, they have the Laksa Paste supplier details.

WMW - Yeah, I saw the "little abacus seeds" but they looked really filling so didn't try it.

Rosa- it was yummy but I think I want to try Sarawakian home cooked ones.

Been there a couple of times. Good but I still prefer d Penang version with major raw cockles + coagulated 'red stuff'.

tummythoz - I like all kinds of laksas so once in a while, this version makes a change.

For authentic laksa sarawak in KL, go to Rasta stalls in Taman Tun (1 Utama entrance). The Laksa Sarawak stall opens today, 18 May 2007 and is branded as Laksa Sarawak Santubong. The cook is from Kuching, Sarawak and used to cook for the rich and famous in Kuching. Her sister is that lady that sells laksa sarawak from her home at Jalan Patinggan, Kuching. Promotional price per bowl is RM4.50. However was told that they would only be there for 2 months (due to technical issues) but will move to the Damansara Kim (near DSH, Taman Tun) stalls. Check it out and let us know how it rates.