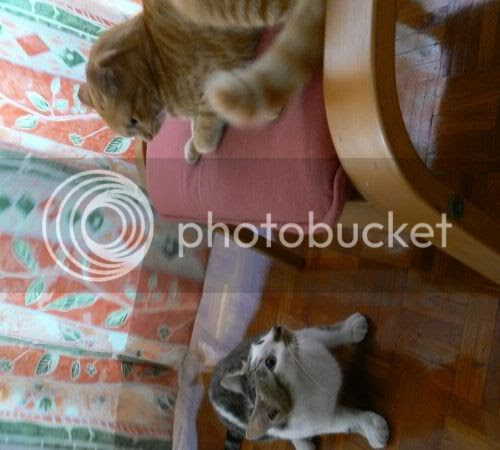 Although the kitty cats generally get along, once in a while they do get into fights. Managed to capture this brilliant picture just before a fight. The grey and white cat often starts fights probably because he's a boy and likes to bug his bigger ginger sister. See how Ms. G knows she's under attack hence she has flat ears and her tail is starting to fluff up. After I shot this picture, he attacked her and I had to quickly break up the fight before any fur flew.
I'm not sure what's happening with WCB this weekend as Clare from eat stuff has kinda dissapeared but nevertheless I'll post this up or else you kitty lovers will be dissapointed.
Tagged with: WCB 62 + Weekend Cat Blogging

I love this picture as it's very dynamic! Mine also fight from time to time and I hate it...

Nothing like a stand off good thing that they dont have six shooters!! (john wayne music in the background)...

I love it when poof their tails and back up! My husband thinks that its called "poofy tail" in English and now his mother thinks that too!I love teaching french people my own dialect of english words. hahaha!

I have a friend in the US who just love cats. She has a site on humorous photos about cats. They can be viewed at

Oooh, great photo. We have scenes like that around our house, too (one young boy cat, older female, oldest male). It's been five years they've lived together, and there are STILL fights. Sigh.

These two are cutie pies. I love ginger cats.

you always have the cutest pictures. i love how the ears are back on both. it looks like go time :)

rosa - it's cute to see them fight though as long as it doesn't get too violent.

dianne - so many kitties and catnip!

riana - poofy tail sounds like the right thing to describe it and yeah, it was definitely a moment for John Wayne cowboy music.

Lisa - yeah, mine like to do the chase around the hse. Luckily the house is big enough for them to run around and hide or else lots of nasty fights.

aria - after that stare down, it was all systems go! Had to quickly put the camera down to break it up as it got quite violent.

:)
Your cats are so cute but so fierce!
(Hmmm,... whenever I see Ginger Cats I think of Friskies)

J - nah, they're sweeties. They don't like strangers though as they'll run when they see someone they're not familiar with.

hehe, even when cats are fighting they still look really really cute. that whole "ready" mode, the tail swating n arch back..

psstt: is it mating season now?

Oh look at Ginger, she looks just like me! Oh, I hope she won this little splat.

Another kitty blog for you to appreciate: