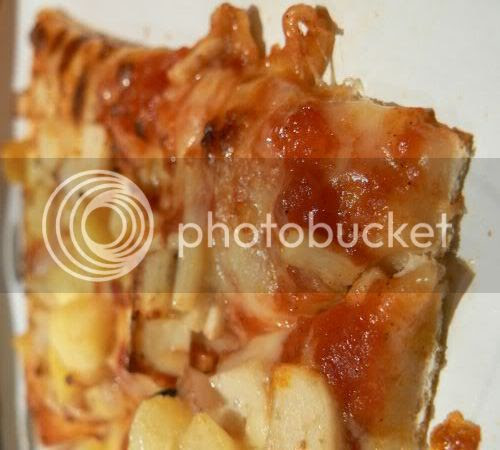 We were around the Subang Jaya area last night and saw the signage for this new pizza place near Subang Parade. If you're an avid reader of the USJ forum, you would have heard about this recently opened place that serves pizza by the slice and extra big pizzas at 15 inches. There has been some good and bad reviews about this place so we decided to test the pizzas ourselves. Incidentally, there are lots of foodies in the USJ forum hence one never gets hungry around that area as they have an extensive list of good places to try around Subang Jaya. (Psssst, overheard on the forum from some watchful eyes - Tony Roma's is set to open an outlet in Sunway Pyramid!)
The place is quite big and doesn't seem to get lots of customers hence it looks pretty empty from the outside. Everything is a nice cheery red and we sat near their reddish wall which was peppered with posters showing Italy's famous sights. They are serving eight types of pizzas but only three are available for their pizza by the slice i.e. the Verdure (roast pepper, mushrooms, tomato and black olive), Tropicana (Chicken Pastrami, Pineapple and Onions) and Diavola (Beef pepperoni and roast pepper). Kinda sad as we wanted to try the other varieties which had artichokes as a topping which we don't always have in Malaysia.
Sadly service is completely not up to standard - our order came later than the people who walked in after us. Our expectations were also quite high for a speedy pizza as their leaflet proclaimed "ultra rapido" and pizza within one minute but sadly it came by slow boat instead. I suspect the pizza within one minute is because they make the pizza ahead and keep it under the food warmer.
They were kinda forgiven when our Tropicana pizza arrived as the pizza was good. No rubbery cheese like the American pizza places which I will not mention but tasty mozzarella which I read is flown in from Italy. Their pineapple cubes are unlike the very sweet canned variety we get as it still had a tang to it. We like their pizza crust - thin but not too crusty and they don't have an unleavened taste to it like other pizzas we have eaten. I read their leaftlets which said they leave the dough out longer hence it's tastier. 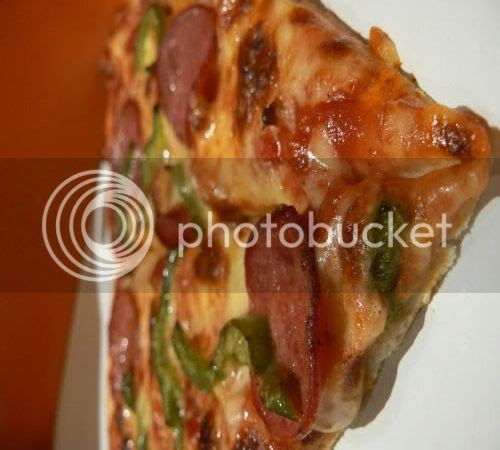 Sorry for the not so spectacular pictures as I am seriously lousy at snapping pizza pictures. I think it's something to do with perspective. The pizza comes in these white paper/plastic plates. Bit hard to describe what material they use but it definitely can take the heat from the pizza. This pizza was the Diavola that came with beef pepperoni and roast green peppers. We both thought this wasn't too fantastic and preferred the Tropicana. Incidentally the pizza by the slice is quite big and sufficient for one person (Pizza by the slice is RM6.99). We will probably have to revisit this place again as we want to try out the different varieties which only come in extra large sizes. Incidentally our set meal came up to RM23.49 inclusive of tax which entailed two slices of pizza, two desserts and two soft drinks. 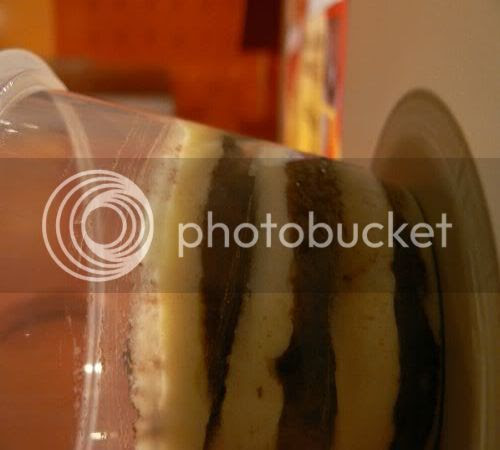 Our set meal came with their signature desserts - Tiramisu and Torta cake. Don't you love the Tiramisu picture - this was taken by Splashie Boy as I told him to get creative with dessert since I was still munching on my pizza. Taste wise, I wouldn't say it's fantastic. The bottom part of their sponge gets kinda soggy as I think the coffee syrup sank to the bottom of the plastic container. 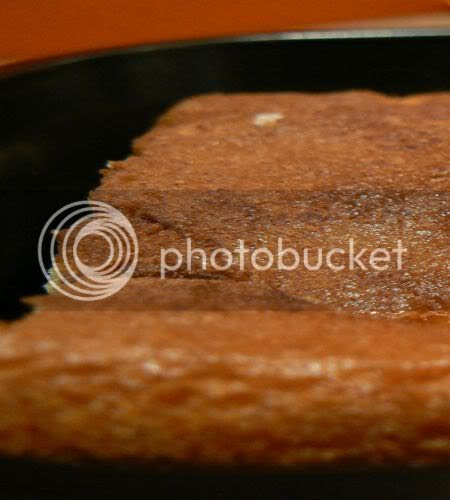 The Torta Cake is basically Apple Layered Cake that we thought was quite dry probably because it's been sitting in the fridge for quite some time.
They also do delivery and currently it's limited to the Subang/USJ, Kelana Jaya and selected areas in Shah Alam. Plans are also on the way to expand the chain and there is talk of outlets opening in Putrajaya and Klang.
Luca's Pizza
G02 & G03, Ground Floor
Wisma DiCor, Jalan SS17/1A
Subang Jaya

Tagged with: Pizza + Subang Jaya
Posted by boo_licious at 6:51 AM

Thanks for the review. We were just considering having that for dinner tonight! It was a toss up between Luca's Pizza, and the other not-so-famous one down in SS15.

fulltime mom - I hope you like it as one guy did write in usj.com he didn't think it was nice while 2 others raved abt it.

I never had pizza in KL. Do they have pickled jalepeno topping? It is one of my favorite. BTW, the satay place in Putera Jaya is located by the agriculture farm. I wish I can direct you. My cousin drove us. Putera Jaya is an amazing place. The buildings are unique and futuristic looking.

Pickled Jalepeno topping?
I personally haven't come across it in KL/PJ.

hey .. great pics... can i know if you bring a camera around town always? or is it from your cameraphone? In europe, they will immediately label me as a jap, if i snap pics all the time =) ,,... and i sometimes let them continue to assume that.

flymeng - don't think we get pickled jalapenos here except in Chillis and TGIF though. Yeah, Putrajaya is really nice, excellent place for pix taking.

J - Pizza Uno's variety is different as it's super crunchy pizza crust. This one is thin but not so crunchy.

Louise - no harm in being known as a Japanese. In fact, I think they treat Japanese better vs Malaysians in Europe! No, pixs are not from a camera phone as the one we have gives blurry pixs.

Have been passing this place so many times. Maybe will give it a try soon. Thanks for the review.

i found the place..just came back from Luca's pizza..we had 4 different flavours..i thought it was quite alright..they dont have chilli sauce which i think is the best way to eat pizza...but seriously..i think the ones in US taste better..and italian fastfood called SBARRO..i think available at KLIA...

It is closed just last month sept 2008 , even the centro mall in klang is closed.not sure abt the one in curve tough.

jenny said...
This comment has been removed by the author.
2:23 AM

I have one recomendation which is in ampang. The pizza there is quite reasonable price and it is located in Spectrum shopping mall called speedy pizza. I guess it is the best pizza i had so far. cheers