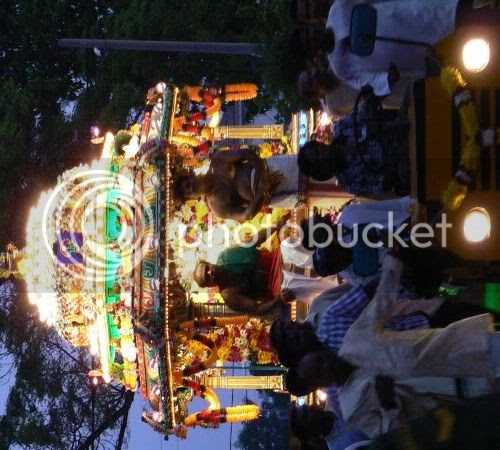 I totally forgot about this picture I snapped on Saturday night until I downloaded the data from my camera. Last Saturday night, as I was driving in Petaling Jaya, I came across this procession on the main road. It was getting dark but I stopped by and took a few snaps. As you can see I'm hopeless in taking night pictures probably because I've always avoided using a flash!
There was a group of people following the chariot which I could see was travelling from house to house and the original point was from the Indian temple nearby. As it was quite rude of me to stop the crowd during their religious ceremony, I didn't really ask many questions. However, I did get some information from one man who was lagging behind and all he could advise me was the chariot goes from house to house to allow them to do offerings. The nearest I could get on the Internet from my memory were pictures Lilian from Malaysia Best took in Penang of a procession. It had cows, milk pots and etc while this procession I witnessed was on a smaller scale.
If anyone knows what the ceremony is all about, do enlighten me as I would love to know more about it.
Tagged with: Malaysian Festival
Posted by boo_licious at 11:30 PM