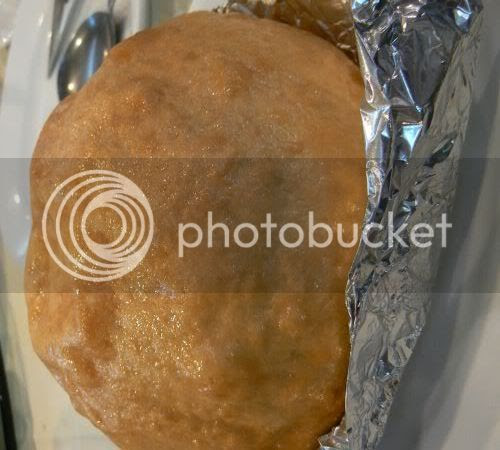 Recently, my cousins from Canada and Australia were back for their annual holidays and it's been one long feast with them almost every night. Since it was such a large crowd and it was extremely rude to snap lots of pictures of the food, I have been restraining myself. We did the usual tour around town for food - Chynna, Pik Wah and Overseas Restaurant for Chinese Food, Raju's for Roti Canai, Madam Kwan's for Nyonya food and Ah Wa's for hawker food.
I finally managed to snap some pictures of the chicken curry in a bun we had. It has been ages since I ate this but my cousins wanted to try it. Their kids loved it so much especially the bread. In the picture above, you can see the bun in it's full glory - glistening and brown from the oven. 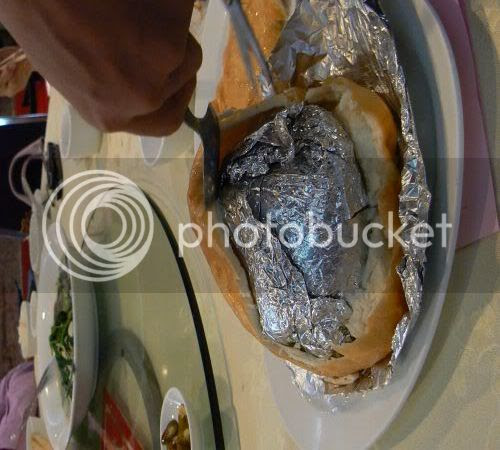 The waiter will cut the bun at the sides and remove the bread to the plate. Underneath it is a foil packet that contains the chicken curry. There's two layers - a plastic bag and foil which will be cut opened for all to tuck in. 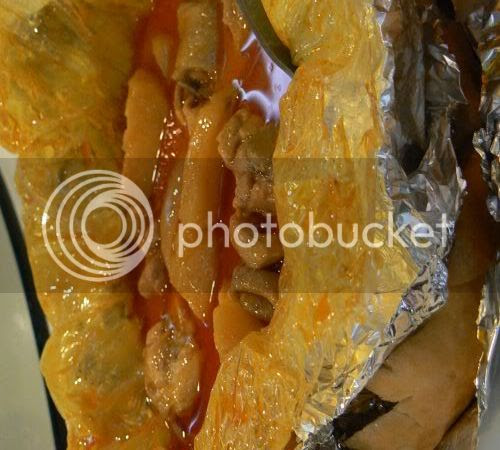 Here's a close up of the chicken curry in the bun. It's pretty watery but full of flavour. I like their chicken pieces as it's nice and tender. Dip the fried bread in the sauce and it's yummy. My cousin's kids finished the bread as they loved it so much.
You can also have herbal chicken in the bun if you wish and this is usually a pre-order dish or only available during dinnertime. Eating Asia also has a blog entry on Kampar's version of this which is called Roti Ayam. I believe this idea of chicken curry in a bun originated from Kampar and mine is the restaurant version. You can also get this at Cecil Street, off Petaling Street in Chinatown at the Tang Food Court.
Restoran Pik Wah
MABA House
Basement Level Stadium
Block6
Jalan Hang Jebat
Tel No: 03 - 2072 3668
*Disclaimer: The opinions expressed here is entirely based on my personal tastebuds and may vary for others. The reviewer also declares that she has not received any monetary or non-monetary compensation from the restaurant for writing this review.

Tagged with: Malaysian Food
Posted by boo_licious at 6:00 AM

hmm been such a long time since we last went to pik wah, too many new places to try hehe

Hi Boo ... a little-known bakery in D'sara Heights, I think it's called Sam's, sells a variety of this bun. Instead of curry chicken, theirs has either chicken kapitan or kerutuk chicken (East Coast styled rendang) filling snugly wrapped in banana leaves and baked in a big soft bread loaf. I've tried both and found both tasty, for a change. Do give them a try, sometime.

I am new in blogging can you add me in your blog ? Thank You

love curry chicken buns and especially these huge buns with an entire chicken inside - here in Singapore, there's a very famous stall which sells them under the name of "golden pillows"!

wow..i thought only ipoh have curry chicken bun..haha:)
yea..now i know KL have it as well..really hope can try it...!

babe - yeah, my family not very adventurous when it comes to Chinese food. Must go back same place.

peetee - I saw Sam's today! It's at Plaza Dsara near Sandias. Will definitely give the bun a try one day. Thxs for the tip!

Ho Jiak - Welcome to the blogging world. No problems adding you on but make sure you update regularly with lots of yummy Penang food for us to drool at.

Thick frame glasses ping - if you don't want this version, I think you can also find them at coffeeshops in Subang Jaya and the one I mentioned in Petaling Street.

tonixe - just drool over them here? Nah, must taste the real thing.

I thought the famous curry chicken bun should origin from Yau Kee, Kampar (Perak)? I have the same problem as you boo, shy to take picture when eating in large group, :p.

Teckiee - Yes, you are right abt the origins but nowadays restaurants also want to cater to the masses hence they also offer this dish.