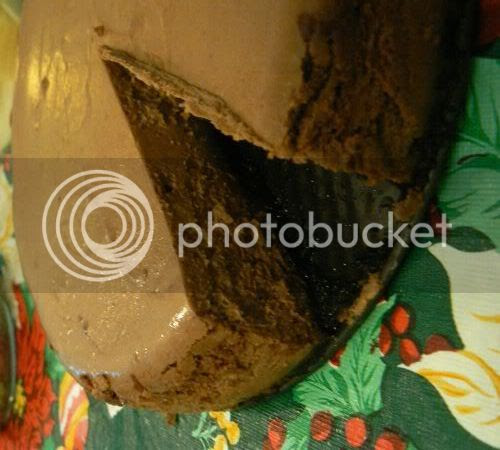 Besides the Chocolate Raspberry Pavlova, I was busy on Sunday baking my first cheesecake (sorry for the not too perfect picture as it was taken in haste at my friend's party). I wanted it to be chocolately since I had recently bought a batch of Valrhona 70% Guanaja from Gourmandines. I was initially torn between trying out Nigella Lawson's Chocolate Cheesecake from Feasts (which will be featured in the future episodes on television) and Alice Medrich's Chocolate Cheesecake from her book, Bittersweet.

Eventually, I settled for Alice Medrich purely because her recipe called for less ingredients and less time in the oven. Although everything well with the cheesecake (which smelt wonderful) and I'm happy to say it didn't crack one bit, it didn't go down too well with the people at the party. Feedback from others said it was too bitter and slightly too tangy. For my tastebuds, I felt it was slightly tangier than what I would have liked in my cheesecake but the chocolate taste was just nice. It took me a while to realise my tastebuds with regards to chocolate has really changed as nowadays all I use in cooking or consume is bittersweet 70% chocolate. Looks like it's time to switch to say 64% Manjari or 40% Jivara which is what Bakerzin uses as the general public's tastebuds aren't like mine.

You will need a 9 inch springform pan

To make the crust: Position a rack in the lower third of the oven and preheat the oven to 350F/180C. Grease the cake pan.

Use a fork to blend together all the crust ingredients in a medium bowl. Press evenly over the bottom and about halfway up the sides of the pan. Prick the bottom of the crust with the fork. Bake for 10 minutes. Let cool on a rack before filling (leave the oven on)
To make the cheesecake: In a small bowl, pour the boiling water over the chocolate and stir until the chocolate is completely melted and smooth. Set aside.
In a large bowl, beat the softened cream cheese with an electric mixer just until smooth about 30 seconds on high speed on a heavy duty electric mixer with a flat beater. Scrape the bowl and beaters well. Turn mixer back to medium to low speed and gradually add the sugar a time. Continue to beat until smooth and creamy, then add the vanilla. Add the eggs one at a time, beating until each is incorporated and scraping the bowl and beaters before adding the next one. Add the sour cream and beat until incorporated. Pour in the warm chocolate mixture and beat on low speed until just well blended. Pour batter into the crust and place pan on cookie sheet.
Bake for 35 to 40 minutes or until cake is puffed and looks set about 1 1/2 inches from the sides of the pan but jiggles in the center when the pan is tapped. Remove cake from the oven. Slide the tip of paring knife carefully around the top edge of the pan to detach it from the pan, but do not remove the pan sides. Place pan on a rack and cover the pan and rack with a large inverted bowl or pot so the cake can slowly cool to room temperature.
Cover the cooled cake and chill for at least 5 hours, preferably 24, before serving. Note the flavours of the chocolate will intensify after 48 hours.

Wow! Looks really good...."imagining" how it would taste like!

boo, Merry Christmas and your cake looks great, i can never achieve no cracks cheesecake. if i am your guest i would have loved your cake, i like bitterish chocolate and tanginess is not a problem for me in present among the bitterness! YUM

I encountered the same problem too. If I used chocolates with 70% and above, most people will complained that it is too bitter although it taste perfectly fine to me. Have to use a combination of those with some normal semi-sweet chocolates...
Anyways, Merry Christmas to you!

first cheesecake already have such a great success, I bet there is nothing left even some feedbacks from the floor right?

The cheesecake look good. I've not baking for long time. Guess what, I've an itch to bake one after looking at your post :D

Regarding the Sticky Finger, their pork rib with original BBQ sauce is quite good, and value for money. I haven't try The Rib shop yet, otherwise I would considered to cover most of the ribs specialist.

i think 70% is fine... i do fine 85% cocoa content a bit bitter though. wah, using valrhona ah. i bought some some time back, mmm serr tuck yong ah!!! (sayang to use) stupid right. buy oridi should use.

i notice most foreign cheesecake recipes have sour cream as ingredient. i opt not to use sour cream...seems to be fine. i use whipping cream, whipped to soft peaks stage. very soft. like ripples. pouring cream consistency.

rokh - I'm amazed too abt the no cracks. My first baked cheesecake so I was very happy.

mycoffee - yeah, only my bf and I liked it. Everyone was like aiyoh, so bitter.

tekko - nah, fluke as I think the recipe is good but just more for Western tastes.

whistler - wow, the pork rib blogger has spoken! Thxs for the tip on Sticky Fingers.

fatboybakes - yeah, very sei tak since it was Christmas! However, kena backlash since no one appreciated the bittersweet choc. Yeah, they like sourcream but I think it balances it out since it's not too sweet. Too much cream cheese plus whipped cream will be cloying and rich.

Incidentally everyone, blogger is acting up again. Will update once it calms down (hopefully!)

Your post made me realise that I've never had choc cheesecake before! I sendiri oso cannot believe. *Note to self:- hunt 1 down pronto!*

we din know sorry we got carried away with all those sinful things u have been tempting us....

it can really melts into my mouth and my heart! can i have a piece? :D

Would do ANYTHING for cheesecake...

Just a question, if you're making a frozen cheesecake, instead of the baked ones, can you keep it in the fridge without adding in gelatin, or must it go into the freezer all the time?

I keep it in the freezer and it takes forever to cut through it. It gets rock hard.

Hi Boo! Merry Christmas and a Happy New Year! Finally got my notebook back and guess whose's blog I am in first??? yours of course!

hey boo, happy new year to you and splashie boy. lets hope one of 2007 resolution is to organise a floggers get together.

happy new year to you and splashie boy... may your blog brings us more delicious and sinful food photos and write ups :-)

happy new year to you & your family! may this new year bring lotsa joy and happiness to you! :D

Tummythoz - fix that craving with Secret Recipe cheesecake. Lots of selections to fill that tummy.

bakerina - thxs! I love cheesecake too, just took me a long time to make my own.

arshana - usually it's chilled and some form of gelatine or jelly is used to set it or else it will definitely melt on you if you take it out.

fatboybakes - aiks! u organise? I reckon I shld delegate it to team BSG as he's getting around.

babe and mei yen - thxs so much for the greetings! hope u have fun too.