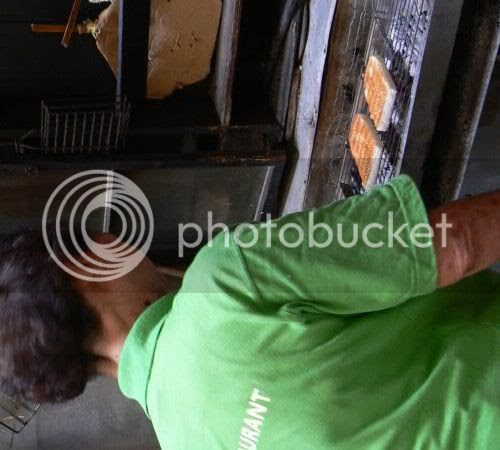 Malaysians have a fine appreciation when it comes to old fashioned items especially dining in Hainanese kopitiams which hark back to the olden days. Mention Yut Kee or that shop along the old Campbell Road and everyone knows what you're talking about. Literally packed with people at all times, this corner kopitiam has been drawing in the crowds ever since they opened in the 1920s. Most of the time, old restaurants get passed down from generation to generation and it's nice to see the owner Jack Lee continuing his father's legacy. His son is also following in his footsteps and takes an active role in managing the restaurant. The family also owns Bodhi Tree restaurant right at the back which is currently run by his wife.
It's here where you get your bread toasted the old style - over hot charcoals. Most of the time, kopitiams have relinquished this practice for the toaster oven which is faster and less hassle. Believe me, old style is always better and the toasted bread definitely tastes better here especially with their home made kaya and a cup of their coffee. 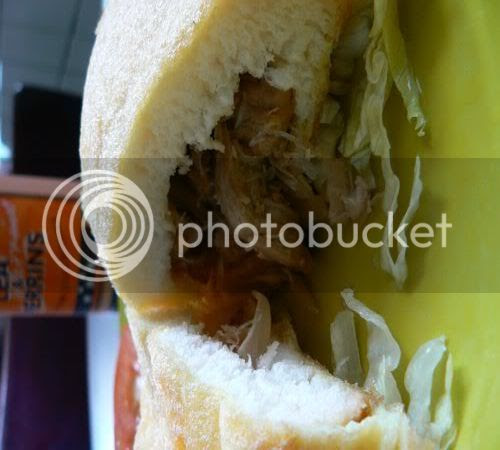 Another specialty in Yut Kee which people flock to for is their Roti Babi. This sandwich made from white bread and stuffed with shredded pork, onions, chinese sausages and crabmeat is dipped in egg and deep fried. The super fluffy bread complements the yummy filling. 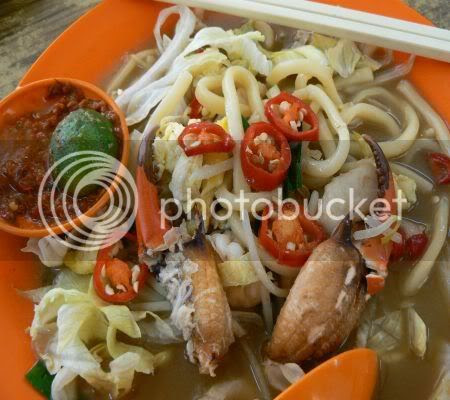 They also serve Lam Meen here topped with crab meat and a kick ass sambal belachan dip. Most of the times, kopitiams don't take the time to toast their belachan but at Yut Kee, they toast it which makes it so fragrant. 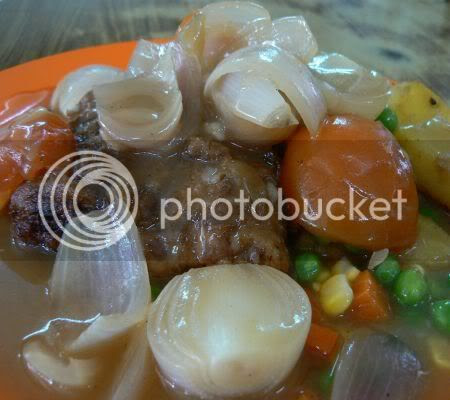 A lot of people rave for their pork chop as it's rare to find Hainanese pork chop but we stuck to their Hainanese Chicken Chop. Served with lots of onions, a side portion of fried potatoes and mixed vegetables, their chicken chop is served with brown gravy which has Lea Perrins Worcestershire sauce in it. The chicken chop is not dried out or over fried like other places and maintains it's juiciness. If you notice, Lea Perrins Worcestershire sauce features quite heavily in Hainanese western cooking as this is what they used during the colonial times. 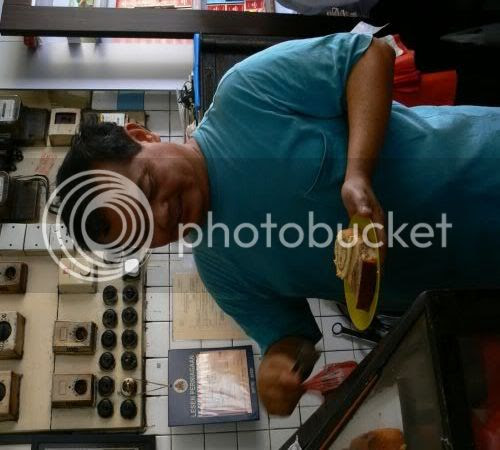 For dessert, you must try Jack Lee's marble butter cake and kaya swiss roll which he makes himself. You can't miss the unique display cupboard the cakes are kept in which is located near the cashier. Whether you're a visitor to Kuala Lumpur or a local, Yut Kee is definitely a worthwhile stop over for a dash of nostalgia and good food.
Yut Kee
35 Jalan Dang Wangi
Kuala Lumpur
Tel No: 03 - 2698 8108
(Opened from 8 am to 5 pm. Closed on Mondays)
Tagged with: Hainanese Kopitiam + Malaysian Food

Other Reviews:
Posted by boo_licious at 9:36 AM

I love their pork chop/chicken chop here. The noodles I find only so-so. But their prices! *swoon* Do not expect kopitiam prices, thats for sure!

ho ho ho .. fianlly you been there hor...i knew this store long long time ago .. from RM5.5 to RM8 he chop but i still love it , and now office been moved near by the shop but seems seldom go there for meal, other then this the beef noodle also not bad! the taste is very good .. You should try other from there and i heard the coffee is teh best it already more then 70 years , oh yeah have you try behide the store restorant name " bothi tree" it also under "yik kee" boss the food there is Yummy and a lots the prise also OK ..

don't know will you try or not , the wan tan mee at the small street also not bad RM3-3.5 taste is ok but a bit dirty la !

Anonymous said...
This comment has been removed by a blog administrator.
10:42 AM

this place is nostalgic for me at least cos my parents used to bring us there on Sundays for breakie. jack is actually my dad's schoolmate or was it classmate, i wasnt too sure. my parents' families lived in the kampung nearby and we hv distant relatives who works in Yut Kee till their old age haha... actually bodhi tree is run by jack's wife margaret and her brother.

their cakes used to be better and the uncle who bakes them have an extra "thumb" on one of his hand. he had left many years ago and we last heard he open his own bakery somewhere in selayang which we cant find where. very sad.

Anonymous said...
This comment has been removed by a blog administrator.
10:44 AM

Anonymous said...
This comment has been removed by a blog administrator.
10:45 AM

opps...Mistake for post so many times,
can please delate the other ah .. i feel so so pai seh already le ...

oh my god, another yut kee review! i really wonder when i can make a trip down and try their food... looks so yummy yummy!!!!!

Another trip down memory lane. I haven't been back there for a while (maybe 9 years or so?). Used to frequent that place with my dear ol' dad and we enjoyed the chicken chop and the fried mee hoon!

AIYOOOO!!! i must go there again lah, havent been there in YEARRRS. their sambal fried rice oso very nice i remember.

The Lam Meen with crab meat looks good, as the pork chops. But I can only eat with my eyes.

paris beaverbanks - Hmmm, but it doesn't stop people from eating here though as it's always packed.

bearyip - no problems with the multiple comments. Can always delete. Sounds like u're a regular here, so this wantan mee is behind the shop at the stalls?

babe - wow, must have been great to eat brekkie there when you were young. I don't think my parents brought me here though as we only used to eat around Petaling Street.

meiyen - coincidence only since J reminded me I had this hanging around.

wmw - that's nice, I guess time to rediscover their food after 9 yrs.

fatboybakes - poor thing. Maybe you can get a break after Christmas and b4 New Year to go down to try their food.

tigerfish - visit Msia and u can feast with your tummy too.

ARGH, this beta blogger is really annoying!!!
lost a comment. was saying that i just went for lunch, 3 of us had mee hailam, hokkien mee and sambal fried rice, and a roti babi thrown in for good measure.
the boy at the counter looks uncannily like the portrait on the wall, presumably an ancestor.

fatboybakes - yeah, I hate beta blogger now. The boy at the counter is Mervyn, Jack's son. The pix on the wall is his grandfather. Sounds like a great lunch.

Yut Kee is a special place for me coz i use to bring my gf, now wife there for lunch. A regular patron i am. ;) The hainanese chicken chop is good as well as the swiss rolls. A must try! Anyway, if you guys like lum mee, do check out a stall in Salak South Garden (inside Restaurant Tim Won). The lady serves nice lum mee and various kinda wonton mee. Operates from 7am-lunch. Check it out!

Oh puhlesse! Are u kidding me? I was there two days ago and tried its Roti Babi and two types of porridge. Fluffy bread u said? It's nothing but fried bread dipped in eggs and some pork meat stuffed into an abomination passing off as food. And the porridge is literally 50% water. And dont get me started with the barley ice I ordered. It's an evil looking concoction with distinct taste of uncooked pipe water.

KL people dont know shit when it comes to goos food. Just because the restaurant has survived for 90+ years doesn't mean it's good. It only means people like you are stupid enough to buy into its whole 'heritage' hogwash.