It's party time again last weekend and this time, it was just a get together among us to catch up with my friend who stays in London. Usually, she comes back once a year but due to family circumstances, she made a trip back for a few weeks. It was good to sit down and chit chat among all of us even though we see each other once in a blue moon. 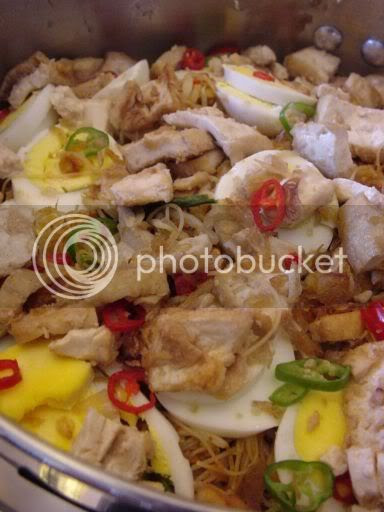 Lunch was the famous Mee Siam that is a family favourite. Fantastic stuff as my friend's mother has perfected her receipe. Although we always get to eat this during Christmas time, it's such a treat to have it twice in a year! 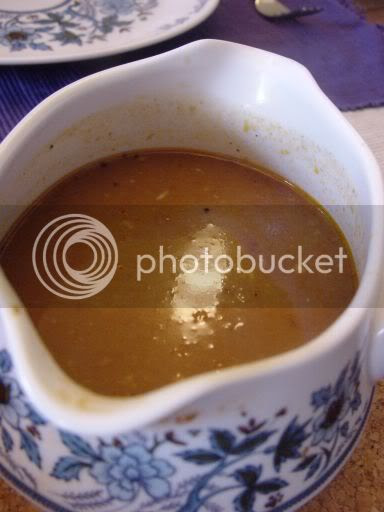 Essential with the Mee Siam is the tau cheo sauce to give it additional flavour. Heat it up and pour over the Mee Siam and I'm in heaven. 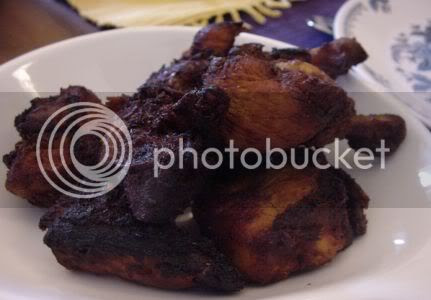 My friend's wife, M is an excellent cook. Last Hari Raya, all we did was sit at her dining table eating her rendang, soto and curries until we were stuffed as the food was fantastic. She brought fried chicken marinated with lots of yummy spices - turmeric, lemongrass, cumin and etc plus chicken sandwiches made with her own mayonnaise.
Dessert was chocolate fondant which didn't turn out like my first attempt as they refused to come out of the ramekins. We eventually ate them in the ramekins with vanilla ice cream. Not sure why that happened but I did prepare the batter ahead and it was my first time using my friend's oven. Incidentally it was christening time for the oven too as it was the first time anyone baked anything in it since it has been installed.
Tagged with: Malaysian Food + Mee Siam
Posted by boo_licious at 5:25 AM

New oven...hmmm..usually we will seasoned them first. Heat them up a few times at normal baking temperature of 160C - 180 C for 30 minutes - 45 minutes. Not sure if that will help with ur fondant as i'm quite a noob in baking

we heated up the oven too but I guess since it's the first time using it, the temperature is still not even.

Anyway.. yumm yumm - espeically the mee siam - my favourite too! Too bad i had to miss the gathering. How's Ms P's new home? would like to visit them soon!

jess - Ms. P's hse is very nice. Too bad you could not join us as u had yr course.