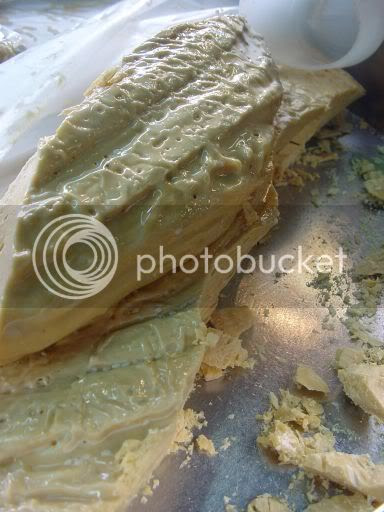 Here's a real blast from the past - I found a stall selling this old fashioned candy known as gula padi or gula tarik (Malay for pulled candy) along Jalan Hang Lekir one day. This candy was extremely popular during the olden days when chocolate bars were difficult to obtain. It's usually sold by hawkers who ride around in their bicycles with trays of this hard candy made from mixing palm sugar with coconut milk that is cooked until it becomes thick and elastic. The mixture is then placed in round trays buttered with oil which will harden into one solid mass. What was equally unique about this candy was the hawker would have to use a hammer and a wedge to break them into small pieces. If I am not mistaken, it was also known as "kok kok candy" since that was the sound it made whenever they tried to break it into pieces. 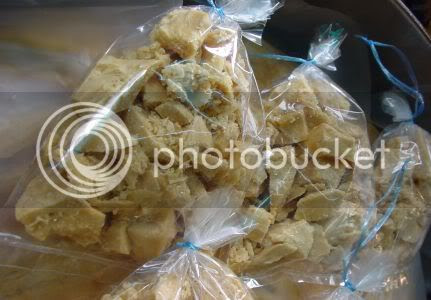 I didn't manage to catch the stall owner breaking the pieces but this is what it looks like when it's all broken up in pieces. Each packet costs RM2 and should be eaten as soon as possible as it can harden again. The candy is extremely sweet which I only managed a few pieces. Usually when I was a kid, I used to see old men riding their bicycles to sell this but this stall owner is a young chap who told me he learnt the trade from his father. I wouldn't say the candy is fantastic since it's too sweet for me but it really brought back memories to hear the "kok kok" sound when you walked past the stall. 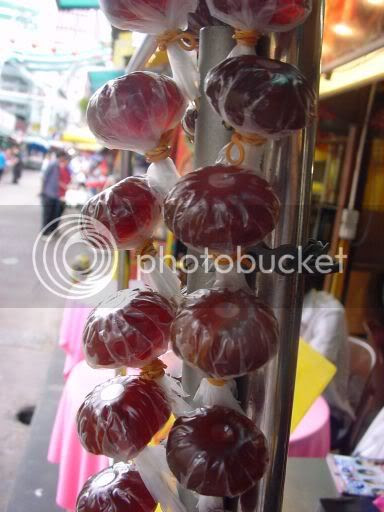 This stall was also selling molasses candy in two forms. One which was harden into little lollipops which you could pop into your mouth(RM1) and in a semi liquid form(RM2.50) that can be used to add to cooking or as a dip. The molasses is usually used in Chinese cooking.
Stall directly opposite Old Town Kopitiam
Along Jalan Hang Lekir
Petaling Street
Kuala Lumpur
Tagged with: Gula Tarik + Malaysian Food

cool, never heard of this. will definitely try check out the stall next time i'm in the area. thanks, you always have the best food tips :-))

we called it "ting ting thong" yummyyy... i wonder the old man along where the florists are is still around?!?

When I was young, very very young when I visit my uncle in Port Klang we used to have this old man selling this type of gula gula from his bike. But as far as I remember, eventhough it is very sweet, I still can eat it... Kids..

Ting Ting Tong..I'd never tried before but heard about it fr my parents..Hehe

I dont' remember much of my childhood, but I definitely remember this "kok kok candy"..

suddenly thinking to have some..

i think the particular stall u are talking about has been in operation for years. used to buy from him during my college days as well.

babe - no old man around the florists though. Maybe this is his son?

flower - yeah, usually it's old men selling it on bicycles.

kampungboycitygal - yeah, I heard all this from my parents too as I didn't really see any one riding around my area when I was a kid. Saw one recently though around the Imbi area.

whistler - yeah, this is very distinct, must be the sound I think which sticks to our childhood memories.

wyejon - not too sure how long this fella has been there since I don't go down there all the time.

Just log in to the site http://www.fleurdelisflorist.co.uk and have a peek into the attractive and fragrant flowers stored herewith, including casket sprays, wreaths, posies and all other types of flowery arrangements. This website serves as a platform for the best florists in uk to sell their flowers at an unbelievably affordable price and as soon as you place orders with this site, the best flowers would be delivered to you at the earliest convenience.

May I know near where in petaling street.
I and my wife love this.

May I know near where in petaling street.
I and my wife love this.