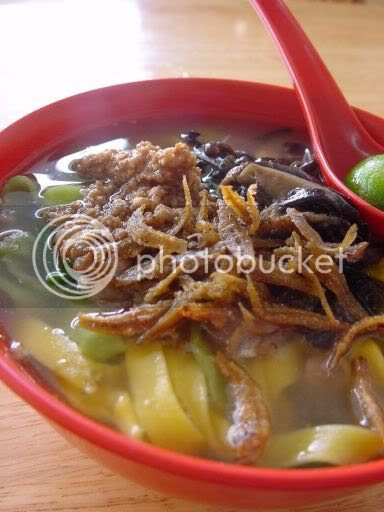 I read about this place from Good Food, Good Life hence I decided to try out the food. Although this place has been opened since June 2005 (per their banner) one tends to miss it out since it's at the quieter end of Paramount Gardens i.e. along the shophouses that lead to Seaview Restaurant. Another reason that you'll miss this place is parking is not too easy to find along the narrow street.
Based on Mark's review, he mentioned that they serve loh pan meen i.e. pan meen which is hand made noodles served with a loh meen broth which comes in a thick gravy. However when I was there, I noticed they also serve carrot and spinach pan meen(RM3.70 for small) hence I could not resist trying it out. I could have had the option of trying it out with the loh meen broth but decided to go for the traditional soup version. 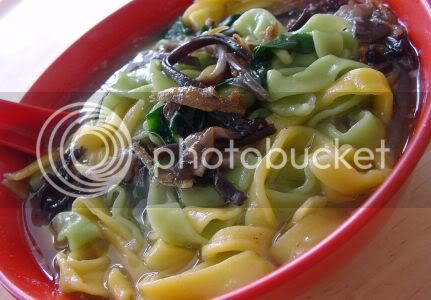 Here's a close up of my noodles before I tucked in - the green colour comes from the spinach while the orange one has carrot juice in it. There's no additional taste to the coloured noodles but they remind me of the colourful tricolour pasta you can get in a packet. The dough is usually mixed ahead and kept under wet towels at the kitchen to prevent it from drying out. As and when you order your pan meen, they will add the dough into the pasta machine to make the noodles. It's topped with minced meat, young yam leaves, deep fried ikan bilis (anchovies in Malay), shreds of black fungus and Chinese mushrooms.
The restaurant also serves loh meen with different kinds of noodles - usually it's served with yellow mee. Here they offer you a variety of their pan meen and mee sua which is good since some people have been avoiding yellow mee with the reports that it contains high levels of boric acid. There is also portugese grilled seafood which is packed in tin foil packets and cooked over a hot grill, seafood tomyam noodles (I wonder if it packs a punch like Yu Ai's?), fish paste noodles, curry mee noodles and etc. You can also have your pan meen with their tomyam broth if you want it spicy.
Restoran Paramount Garden
55 Jalan 21/12
Paramount Garden
46300 Petaling Jaya
Tel No: 03 - 7873 5703
(Open from 7 am to 4 pm daily. Non-halal. Good Food Good Life has a Google Earth map on his blog.)
*Disclaimer: The opinions expressed here is entirely based on my personal tastebuds and may vary for others. The reviewer also declares that she has not received any monetary or non-monetary compensation from the restaurant for writing this review
Tagged with: Malaysian Food + Pan Meen
Other reviews:
Posted by boo_licious at 5:30 AM

i did try the one at paramount garden b4! Nice!

other nice pan mee is the one @ the mid valley oasis food court & the Bao Bao @ Aman suria! Tried b4?

sounds good. The one in Klang is over rated. went there but nothing special..

Carrot and spinach pan mee? That is interesting, I shall try out.

foodcrazee: I'm from klang, do heard about the pan mee in klang but never try yet.. ppl told me you got to wait for long time for the food and some ppl say not bad, I guess it's tasting is individual preference.. I shall try one day then.

Joan - u're the pan meen expert! Not tried the other places you have eaten - thanks for the tips as I will definitely give them a try.

foodcrazee - the one in berkeley garden which the whole queues up? I think I ate that when I was a kid. Maybe I shld try it now and see if it's good.

whistler - it does not taste anything different. More of a visual effect since you see green and orange when you eat it.

yeah....totally agree with joanne. The pan mee in Mid Valley is the best so far......