I love Japanese food and it's always my default choice for dinner, if possible. One of my favourite spots is Rakuzen at Subang Jaya which is tucked away in some obscure shophouse. Besides this outlet in Subang Jaya, the same management also runs another Rakuzen in Chulan Square and Zen in Sunway Pyramid. We get pretty decent Japanese restaurants here as we have a large community of Japanese expatriates who are seconded over to work in Japanese companies. In certain areas near their work area and homes, there are Japanese restaurants everywhere. Subang Jaya is one area that has quite a few Japanese outlets as this place is quite near the Japanese factories in Shah Alam.

It took us a while to search for a table that we were satisfied with that gave good lighting; the ones downstairs were too dim but the upstairs tatami rooms were just perfect with their halogen lights. We ordered a Spider Maki that has a deep fried soft shell crab for starters. I notice the sushi counter is always busy with requests (it takes quite a while to get this) as everyone seems to order from it. The last time we were here, we had their famous Dragon roll with prawns and avocado which I thought was so so. This Spider Maki was much nicer and tasted oh so good with the crunchy soft shell crab. 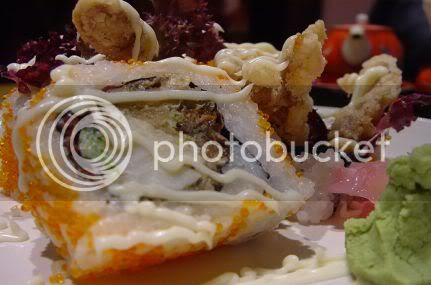 Splashie Boy wanted something light that night as he had a heavy lunch so he opted for Niku Soba noodles. The noodles came with thinly sliced tender beef, mountain vegetables (sansai) and nameko mushrooms in a flavoursome dashi broth. I had a bit of the broth and it was yummy. 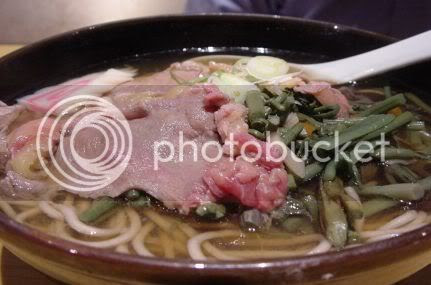 I love sashimi and sushi rice where they have mixed rice vinegar into cooked short grain rice. One of all time favourite dishes is the Chirashi Sushi where they have assorted sliced raw fish on top of sushi rice. Rakuzen has this unusual Chirashi called Hokka Chira Don which has slices of raw salmon, salmon roe, cuttlefish on top of sushi rice which has been sprinkled with sliced pickled ginger (gari), sliced omelette and sliced cucumbers. Simply heavenly stuff and so far, this is the only place I know that serves this combination. 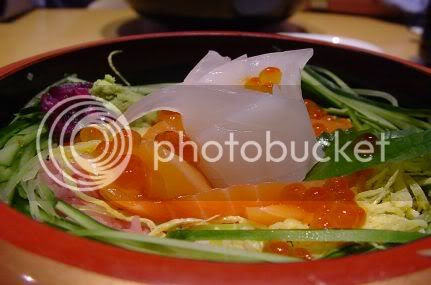 Although it was a weekday, the place was packed and the tatami rooms upstairs were full. A well worth trip all the way to that part of town for some yummy Japanese food. Now, I must try and persuade Splashie Boy to try their KL outlet which I reckon is nearer to my place!

wonderful post, and food photography. looks yummy. i'm not such a huge fan of japanese food, but don't mind trying more. which places do you know of in the PJ/damansara area that's not too bad?

It's lunch time. Wrong time for me to drop into ur blog. The London Philharmonic Orchestra is playing a symphony upon seeing those yummy pix. Like q, am not a huge fan either, but cud try Rakuzen just based on ur post.
Btw, I'm a sucker for spaghetti vongole. Know where the best is?

Boo, you made it to the Subang, Sunway area! :) Hehe...couldn't help thinking about how you were trying to make Splashie Boy come down to Subang to try Asia Cafe!

Japanese food is my favourite too. I went to this place once anad i just love the crunchy soft shell crab.

q - the food was yummy! Jap places in PJ/Damansara? You can try the one in PJ Hilton which is nice. They do a Jap Sun buffet. I like their california rolls with a salmon sashimi.

xig - do give rakuzen a try. spaghetti vongole, I used to like toscanas at Desa Sri Hartamas but I just saw that they closed down!

sue & eternity - we had an errand to run in PJ so I managed to get him to Subang or else, he will veto going there especially during a weekday night.

emotionalistic - yippee, I have a friend too. Make sure you go eat more Japanese food and blog about it so I can drool.

lye hock - thanks and welcome to my blog. hope you enjoy yourself.