Last week, I did promise to blog more about Hakka food but then I realised although we went to eat at a Hakka restaurant, we didn't really order the traditional Hakka dishes. So sorry about that but we did try a variety of dishes which were pretty good too and I thought I will blog about that instead.

We had this Claypot Wine Chicken that is a combination of Chinese yellow rice wine with chicken and ginger shreds. This is an extremely popular dish for Chinese women after giving birth as the Chinese believe the ginger will help get rid of the wind you suffer from as an after effect. During their one month confinement, Chinese women get fed this all the time until they're sick of it. I actually like this dish once in a while as it's pretty tasty and great with white rice. 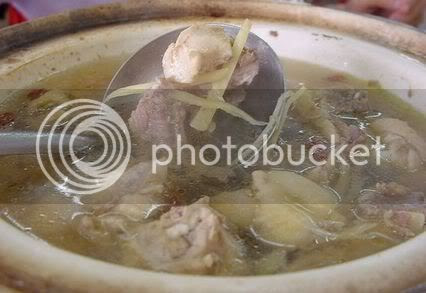 We had a steamed grass carp with a minced garlic and ginger sauce that was cooked just right. The sauce was not too salty and the fish is quite light and tasty. One thing about this place, it does not seem to be heavy handed with oil like other Chinese eateries. 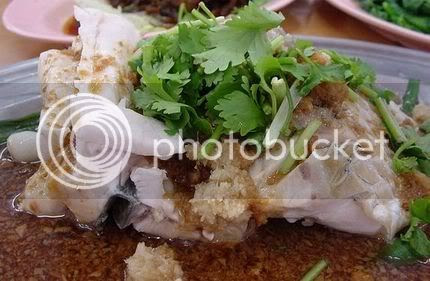 This is their Salt Baked Chicken which was not that fantastic. The chicken was not salty enough. The proprietor came around to ask us feedback about the food and we told her the chicken was not salty enough and she said she did not want to add to much salt for health reasons. Fair enough but somehow it just does not taste right without that extra salt. 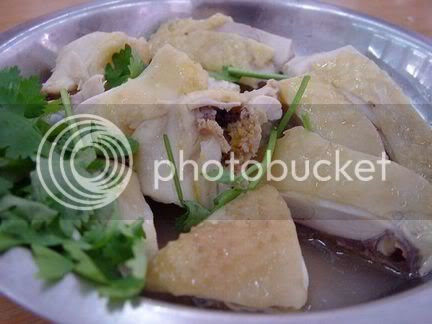 I think this is Steamed Choy Sum with fried garlic. I liked this as there was not much oil in the dish. Usually whenever you order the vegetable dish from a chinese restaurant, it is swimming in a pool of oil which I hate. 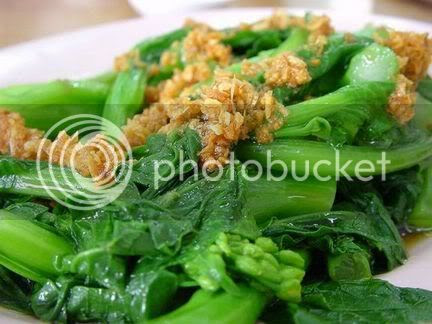 The place is relatively new and is open for lunch and dinner. I wouldn't say the food is super fantastic but I think it's a pretty decent meal if you're around the Petaling Jaya area and want some home cooked food with less oil. You can try their Hot Pepper Soup the next time you're there as they serve it with some unusual items like shellfish lala, lamb and chicken.
Goldview Hakka Food Restaurant
Sea Park (opposite Giant supermarket and post office)
Petaling Jaya

Closed on Tuesdays
*Disclaimer: The opinions expressed here is entirely based on my personal tastebuds and may vary for others. The reviewer also declares that she has not received any monetary or non-monetary compensation from the restaurant for writing this review.
Posted by boo_licious at 3:30 PM

Agree with you that alot of chinese restaurants tend to overdo the oil abit. This hakka restaurant looks quite good. What are traditional hakka dishes?

Makan King - traditional hakka dishes they serve there are the black vinegar trotters and the mui choy kau yoke. They also have steamed salted fish pork and grilled portugese fish.

I would love to have the wine chicken..! good for health for sure..!! anything herbal is also great ..! unfortunately, in this small town that i'm in.. we donch have things like that.. and I'm way too lazy .. to cook it.. or find its ingredient..!

All sounds so good!!! Didnt know that black vinegar trotters and mui choy kau yoke are hakka dishes! Only know how to eat la! :D

mrst - never mind, you come back to Malaysia and then you can eat as much wine chicken as you like.

makan king - No worries! Just keep eating and blogging away.

ate loads of rice wine chic during confinement but since it was not an everyday feature, i'm still not sick of it :p yummzzz

babe - thanks for the tip on cooking this dish.

How interesting! In the Philippines, eating ginger soups for new moms is said to induce lactation too.

karen, guess everyone uses the same principles just that we never realise it.

just came back from this restaurant. the steamed carp were delicious and a bit spicy. I ordered their Mui Choy Kau Yoke, which was really good too. Same as their Ginger Braised Duck, tender and full of flavour, we even finished the sauce to bits. The other surprise were their Seafood Omelette, came in Tit Pan style .. overall, good experience and not too pricey for PJ folks.