Although I now live in Kuala Lumpur, I still haunt my favourite places in Petaling Jaya as I grew up there. One of the places which I like to go to is this seafood porridge which is at Petaling Jaya New Town.
In Malaysia, porridge is usually served in hawker stalls and dim sum places. Recently I read that the new trend is porridge steamboat where you cook your food in the porridge. You can have your porridge in a variety of ways. The Teochews serve it plain and watery but with a variety of side dishes. The traditional side dishes are deep fried salted fish, salted duck egg, salted vegetables and soya sauce stewed duck and tofu. Then you have the flavoured porridge which is cooked with fish slices, meat and century eggs. If you order the fish porridge, usually they will serve you a piping hot bowl of porridge and a plate of thinly sliced raw fish with slivers of ginger. You toss in the fish slices and mix it in your porridge which will cook it instantly.

In this porridge stall, they are famous for their claypot seafood porridge. They will cook the porridge in a claypot and add seafood like dried scallops, fish slices, tiger prawns and fish paste inside. The porridge is served to you in the claypot which helps retain the heat so you always get piping hot porridge during your meal. A few years back they used to serve it with crab meat but that seems to have dissapeared from the claypot recently. The porridge is "sweet" with the addition of the seafood and smooth. I wanted to take a picture of the claypot it was served in but steam was fogging up my camera lens so I settled for a picture of a cooler porridge served to me.
Hoong Kee Seafood Porridge
8, Jalan Tengah
Off Jalan Yong Shook Ling
Petaling Jaya New Town
(next to the United Overseas Bank)

Open for breakfast and lunch only.
*Disclaimer: The opinions expressed here is entirely based on my personal tastebuds and may vary for others. The reviewer also declares that she has not received any monetary or non-monetary compensation from the restaurant for writing this review. 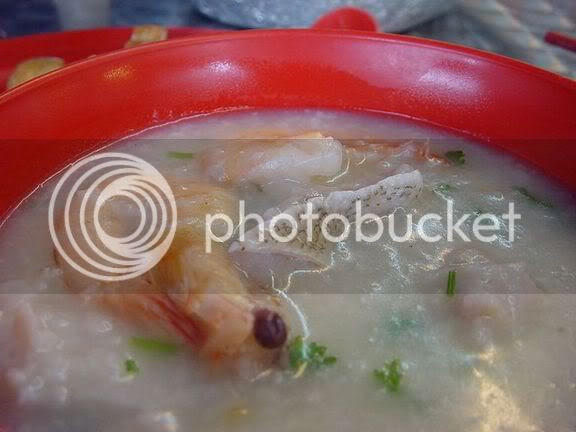 Nice looking seafood porridge. Will give it a try one day. One of our favourite porridge stall is in Petaling Street.

We have tried the porridge steamboat. It is very very nice. Too bad we always forget to take pictures. One day will remember and you can read it at our blog.

makan king - yeah, I love the one in Petaling Street too. This steamboat sounds good. Make sure you go again and blog about it.

I found the Facebook site for Hoong Kee Seafood Porridge!!!