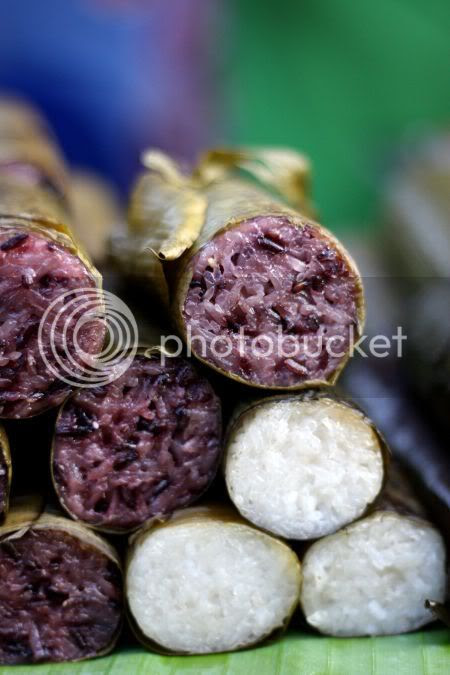 the unusual lemang pulut hitam made from black glutinous rice

Thanks to Adly from Fried Chillies, we discovered this great Ramadan Bazaar. A little off the beaten track from the city versions, this is definitely worth the short drive on the highway to get here. One testament on how good a bazaar is for me, is when I return from the place laden with plastic bags full of stuff. With this place, it was not hard to hit that target, as we wanted to get everything we saw. 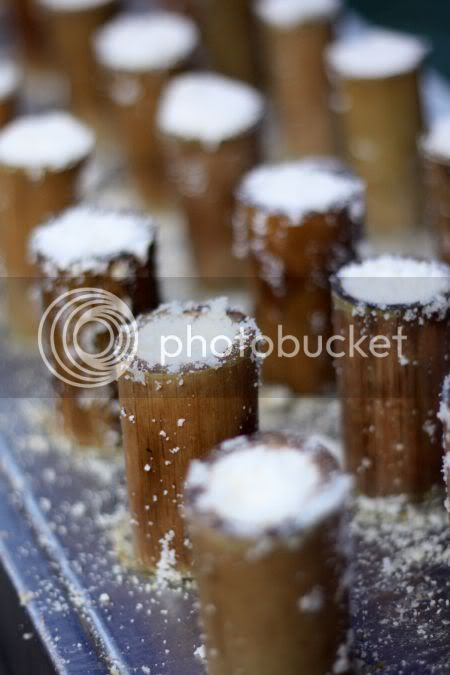 There seems to be abundance of Kelantanese food stalls here - loads of them selling nasi kerabu, blue tinged rice sprinkled with dried fish flakes and chopped herbs. One lady even called hers nasi kerabu hitam (nope, it wasn't black but blue!). 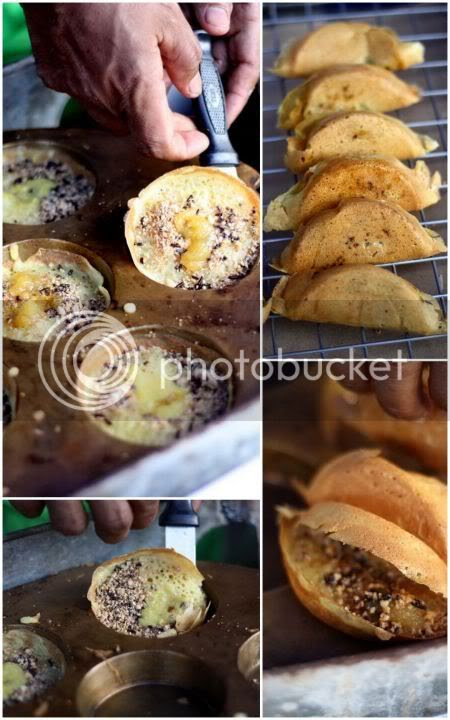 gorgeous mini apam balik with rambutan and pineapple jam
Since Kelantanese food was the flavour of this bazaar, you got a great variety of ayam percik, solok lada in all kinds of colours - light green to red! and etc. 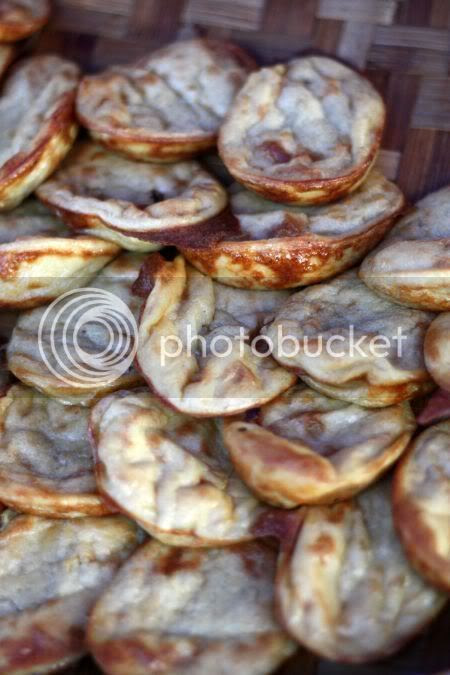 eggy and rich with coconut milk akok - one of the best tasted ever
My favourites were the sweet stuff. We discovered this mini apam balik stall - small cute crunchy pancakes that had unusual jams inside them like pineapple and rambutan jam. Really delicious stuff that seem to melt in the mouth. If you visit this place, do get those. It's 4 small ones for RM1. 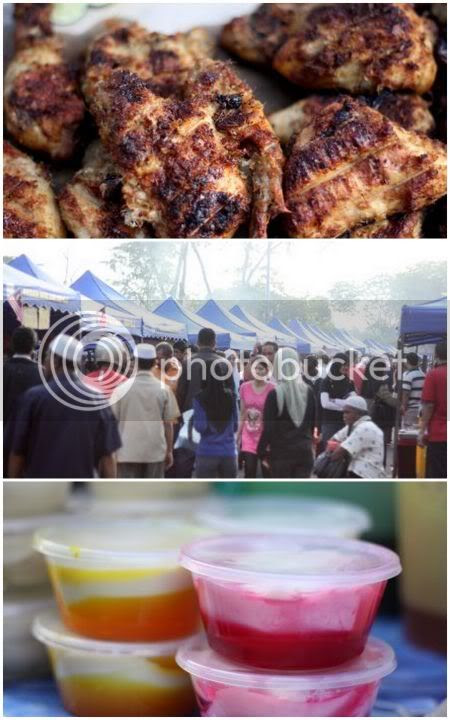 1. lemongrass grilled chicken, 2. the crowd & smoke, 3. fruit flavoured tau fu fah
Remember I mentioned an abundance of Kelantanese food, it carries on to the sweet stuff and you find loads of stalls selling akok here. We stumbled on this stall we reckon must be good, since her akok was almost sold out even though it was early. Well, we struck gold as the akok was definitely one of the best I have tasted. Soft and decadent with a rich duck egg and coconut milk taste. Gorgeous stuff that I could eat with loads of bitter black coffee to counterbalance the decadent taste. If you ever drop by this bazaar, look for Akok Pak Ali Serdang. Damn good stuff, I definitely won't mind taking a drive to get a taste of. 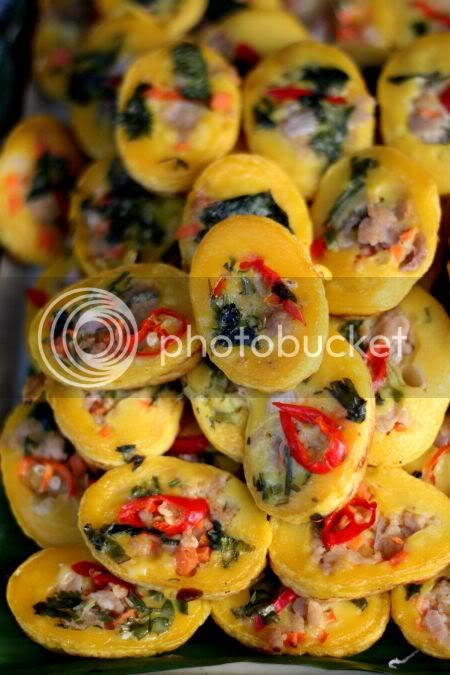 savoury kuih cara
We also discovered this stall selling lemang including the very unusual pulut hitam (black glutinous rice) version. Couldn't resist trying that and it was good, not as chewy compared to the white version and a little softer but still very delicious. 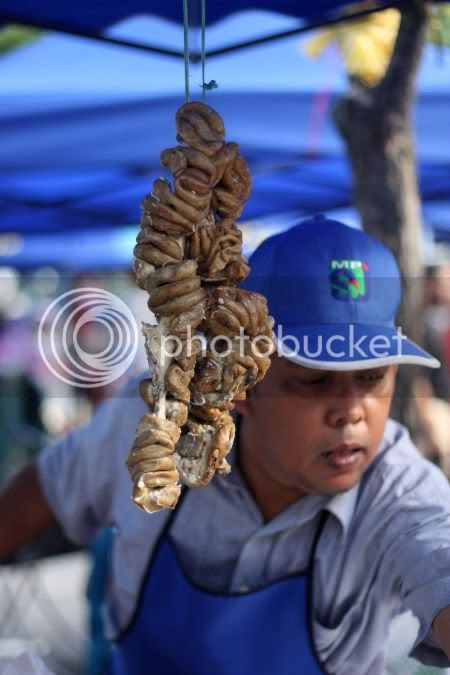 great soup and most unusual bits and bobs of the cow to go with it
The most unusual stall was the beef soup one. He was selling the soup with all bits and bobs of the cow - including the rarely seen intestines! The soup is gorgeous - kinda warms your toes and most importantly it tasted like beef soup. Some places seem to skimp on the beef bones they add, hence they taste more like dishwater! The intestines are kinda fatty though so one suggests, you ask for the mixed parts instead. 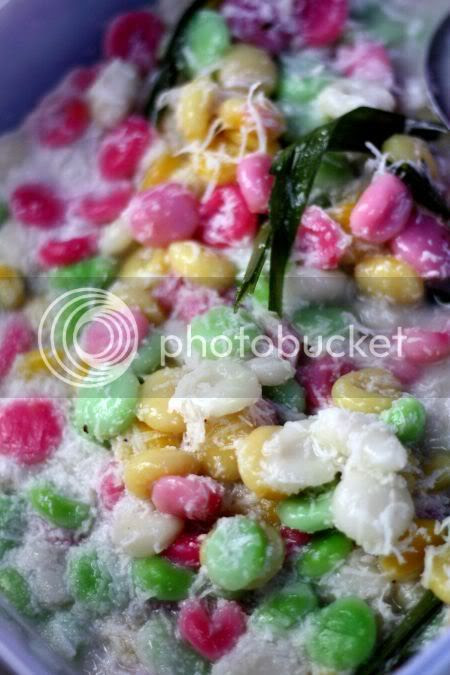 colourful puteri mandi
We also found an unusual mushroom soup place that also served fried oyster mushrooms, which we bought a packet of. A little chewy, the mushrooms were coated with spices and tasted pretty good even when it was cold. 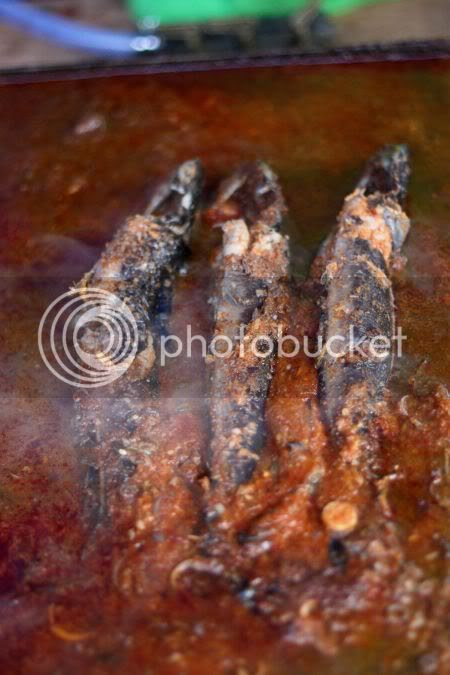 organic ikan keli
Organic items seem to have found their way into bazaars. Yesterday it was organic sugar cane juice and today, it is organic ikan keli (catfish) being sold here. They were cooking the fish in a sauce, that didn't look appealing though. 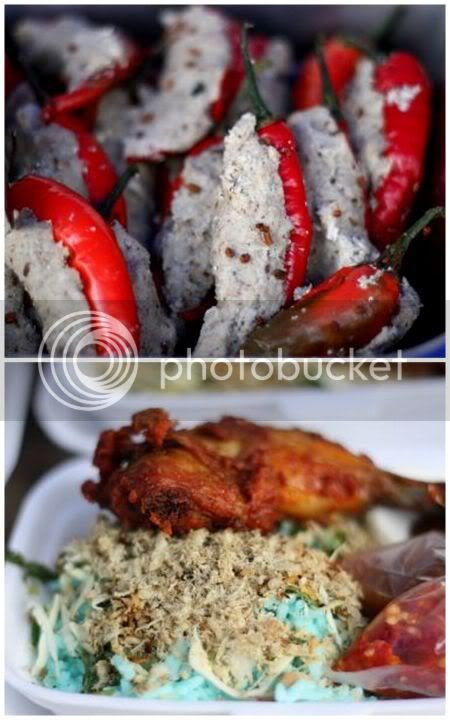 1. red solok lada, 2. blue tinged nasi kerabu everywhere here
There were loads of stalls selling chicken being roasted in contraptions they had made themselves. One particular stall had their roasting area placed on top of a drain! That particular stall was quite enterprising and favoured by many, as they chopped the chicken in various parts to be sold. Great way to get just the chicken pieces you like. I tried the chicken wings (RM1.50 each) and they were delicious. Not too dry and juicy. 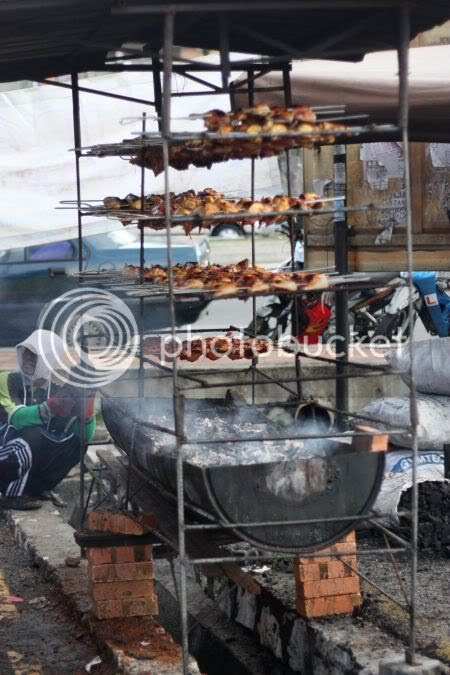 unusual way of roasting chickens, over the drain
The bazaar is under MPSJ, that seem to run the bazaars pretty well. They had one officer monitoring the situation and I liked how they had organised the smoky ayam percik and ayam golek fellas to one side, to prevent smoke getting into everyone's eyes when they walked past. 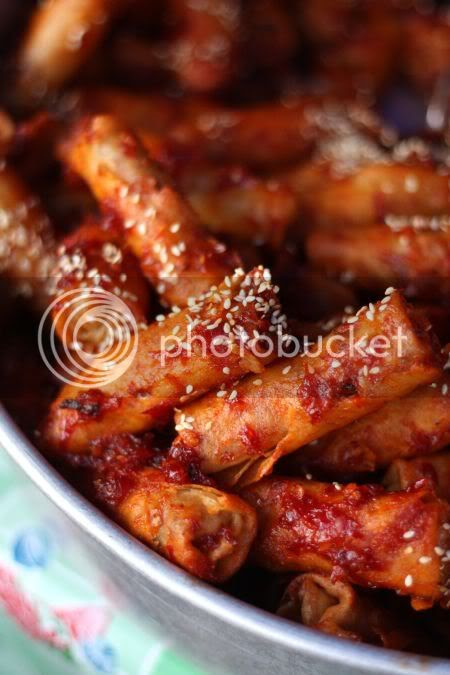 fried popiah
Most of the patrons of this bazaar are from the nearby university (UPM) and we did see quite a few foreigners gawking at the stalls and trying to figure out what to eat. 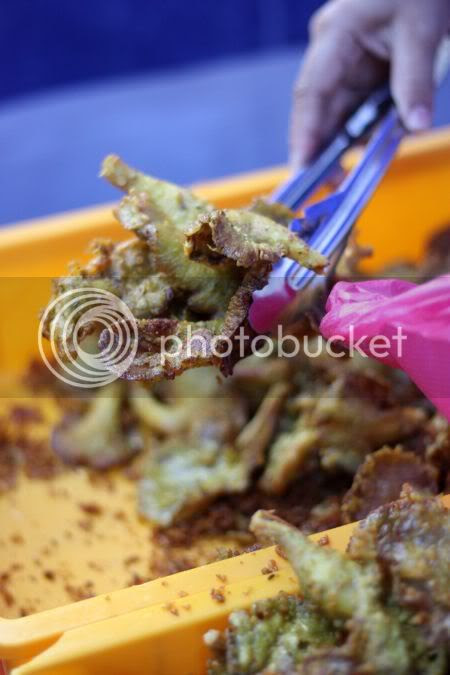 fried oyster mushrooms
For me, the bazaar seems to have more home made items and it was not so commercial. Could see, most of the savoury food items were prepared at home and packed in plastic containers here. 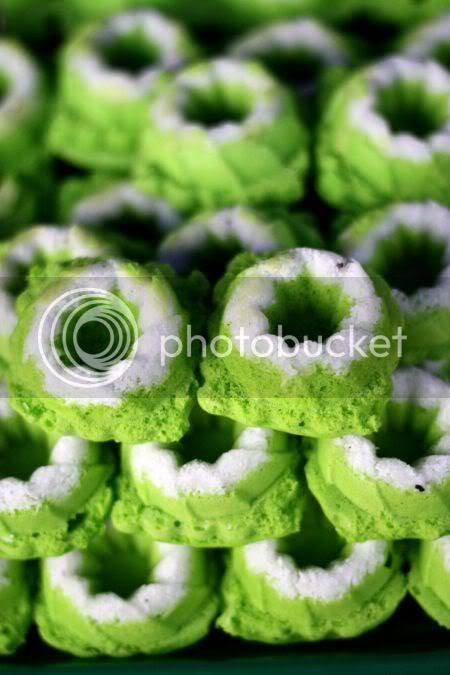 my favourite kuih - the sweet kuih ayu
This place definitely gets my vote for best bazaar, that I have visited so far. Do make a trip down this weekend and check it out (since it is another long weekend especially for those who work in Selangor). You won't regret it. See my Flickr set for more pictures.
Ramadan Bazaar Sri Serdang
Off Jalan Sri Serdang
Serdang
Selangor
Starts around 4pm until buka puasa time about 7.30pm
(To get here, take the KL-Seremban highway, go towards Seremban and take the turning out when it says UPM/Serdang/Seri Kembangan. Drive towards UPM, pass the university and take a left at the second traffic light (after the Petronas station). Drive straight and take a right at the first traffic light. You will see Taman Sri Serdang's police station on your right hand side and a school on the left. The bazaar will be just after the police station on your right hand side.)
Posted by boo_licious at 9:10 AM

seilor.. everytime i log on i get hunger pangs.. lovely shots!

thumbs up for the great shots, vibrant and delicious.
i like Akok as well, though during my 1st visit to Kelantan, i had doubts, fearing they'll be extremely sweet.
and never knew solok lada is a famous Kelantan delicacy, as when i was biting into one that time, i kept wondering, why the Malay Yong Tau Foo so prominent one?! :)

The spirit of Ramadan!! Ah... hats off for covering so many ramadan bazaars :) although I doubt that I'll ever hit one in KL or Selangor.
You drive all the way to Sri Serdang just to feast yourself with those delectable Malay food?

whoa!
Something new and interesting!
I should get my a$$$ there ;p

Hi boo_licious, u take REALLY GOOD photos. I'm not an expert with photos, but may I know what camera are u using for these photos?

the popiah is very much different than those chinese style popiah...

are you hitting the bazaar in TTDI or Penchala anytime soon???
I remember getting stuck in the jam while in Taman Tun last weekend.. sigh!! Forgot about those buka puasa thingy

this bazaar's food are so special.

Argggghhhhhhh. Cant stand it anymore. I want the mini apam balik, nasi ulam, solok lada n whatever drinks they have.

I made my own kuih cara berlauk yesterday. Cant find any here. ;)

This Ramadan Bazaar looks really nice! I like chicken roaster over the drain. I like the homemade foods you showed. Oh, I would like to taste all of the food there, even the catfish!

the bazaar of my school..there is one stall there owed by a couple selling very yummy nasi kearbu and nasi dagang

What gorgeous colours!! I still haven't made my way to a Ramadhan bazaar.. got rained out the three times I've planned this year!! :-S

I never fail to buy the akok whenever I'm there. The murtabak stall opposite is pretty good with chunky meat and the curry is not watered down. aah all the bazar reviews here are so mouth watering! I passed by a bazar in Putrajaya Precint 2 but didn't have time to drop by. It looks to take up quite a huge area too

Trully amazing shots! I can't stop drooling all over my keyboards!