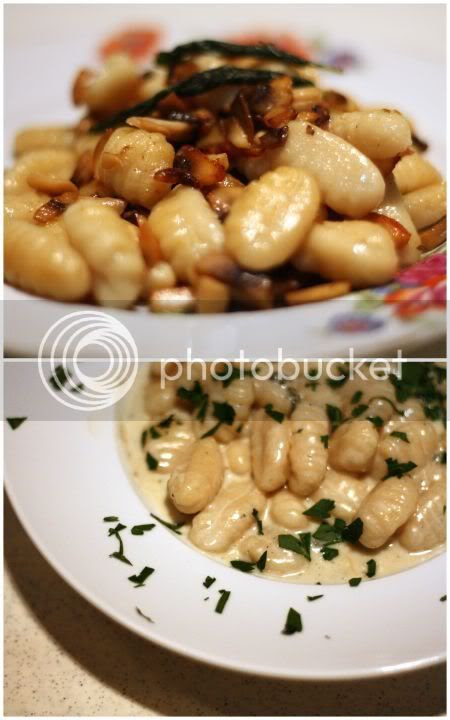 truffle oil blessed gnocchi & supremely rich gnocchi with gorgonzola sauce
From the streets of Brickfields, let's have something different today - some Italian gnocchi. Every time I visit Dish @ Dua Residency, it is not only about dining there, but stocking up the pantry at home since delicious ingredients is next door and they often have gourmet items not usually found in other places. Like this wonderful gnocchi from Rustichella D'Abruzzo (RM17.90 for 500g), one of my favourite brands of pasta. While there were no English words on the packet, I roughly could make out it was made from potatoes and best of all, gluten-free! I know, I should be making my gnocchi from scratch but honestly, when my weekends end up being as crowded as my weekdays, reaching for the instant stuff is a great idea. 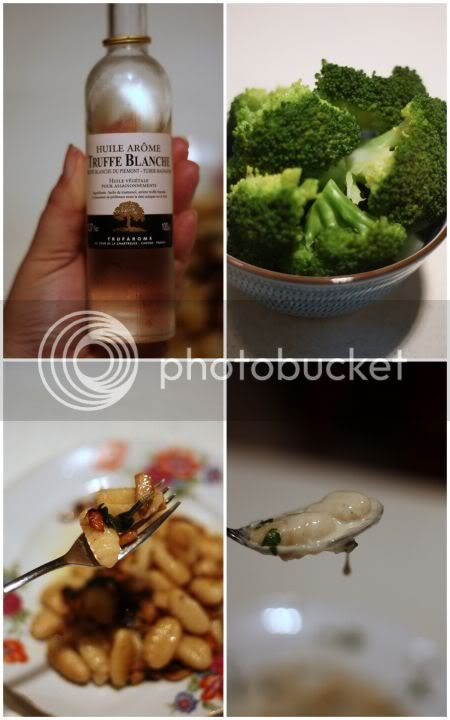 1. french truffle oil that smells heavenly, 2. we did get some healthy greens in there, 3. gooey sticky gorgonzola sauce, 4. close up of gnocchi that kinda resembles larvae worms
Instructions were a little vague on the packet, hence I just threw caution in the wind and just boiled water, chucked a few inside and let it float on top. I reckon, that would mean it will be ready to eat and I was right. Deciding to experiment, I made one version similar to what is served in Dish - with burnt butter, mushrooms, sage and annointed with truffle oil. It was extremely easy that one didn't even need measurements or a recipe, just toss in butter, cook chopped button mushrooms and sage until the butter turns slightly brown. I tossed the cooked gnocchi in the melted butter concoction and let it cook a bit to get the flavours in. Then it was drizzled with a little truffle oil that made the simple dish taste heavenly!
The second experiment wasn't too successful in terms of taste - mixing it with a very strong gorgonzola cheese, which I melted and added a little cream. It was way too rich tasting that didn't make it everyone's favourite. Definitely only for those who enjoy super strong cheesey flavours. Nevertheless, I reckon I'm hooked on the butter, mushrooms, sage and truffle oil version and wouldn't mind making it again and again.
Posted by boo_licious at 1:00 PM

looks great! do u prefer your gnocchi on the chewy side or the soft side? i'm leaning toward soft for gnocchi in tomato and cream-based sauces and chewy for oil-based/lighter ones. dunno whether that's the right way of enjoying it though!

Ooh, I love gorgonzola... wouldn't have minded your second experiment, strong as it was. :D

what important is... what did splashie boy say???

Ooh looks very good. Have never try gnocchi. wonder how it tastes like?!!

So, the question is...when is Masak Masak turning into a restaurant?

Sean - I cooked the gnocchi a little longer in the pan with the butter hence it had a nicely browned crust and was a bit chewy! Tasted very good and yes, the softer ones go better with the sauces I reckon like the pungent kickass gorgonzola sauce.

Life for Beginners - it was already the intense gorgonzola I bought and I added loads that someone was like urggh while I was a happy camper!

Leo - he loved the butter one as it had truffle oil but not the creamy smelly one.

Ai Wei - LOL, they do, don't they? Can trick people and tell them, you're eating worms!

eiling - kinda like soft dumplings with very little yield when bitten into.

qwazymonkey - only restaurant Masak-masak will open is the private one! Only open during wkends.

looks wormy and way too rich to me.

Its nice having Italian without the hassles of remembering and pronouncing names:-)

foodbin - bring out the betel leaves and we'll have a worm feast! Yeah, when I saw the pixs, I thought they looked like fat larvae worms.