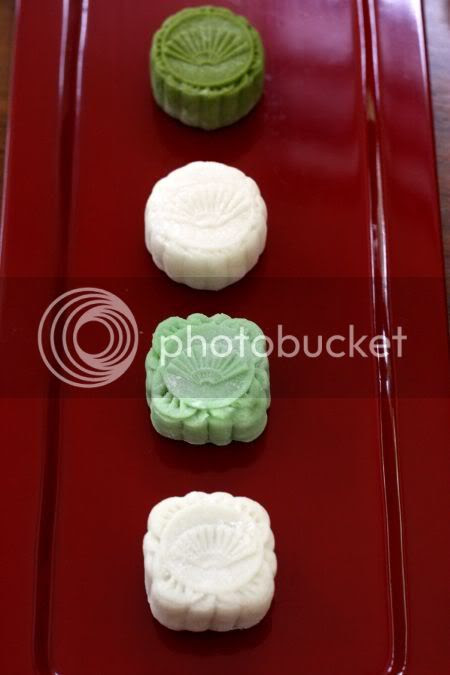 This should be my last post on mooncakes until I get my batch of jelly mooncakes. Hope all these posts have been informative to everyone. This year's sample size is quite small - limited to a few hotels. Hopefully next year one can cover more of the traditional shops selling mooncakes. 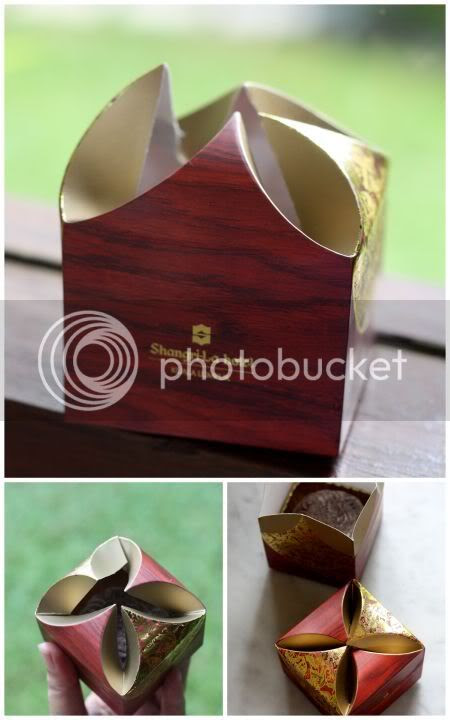 I love the Shangri-la's cute mooncake boxes with the folds. Dragon-I has similar ones except theirs are all golden colour

Nowadays mooncakes are often given as gifts hence I love looking out for the nice and interesting ways they present them. This year, the one that impressed me the most was Shangri-La's packaging. If you buy 6 pieces, you get a lovely hexagonal magenta box decorated with peonies and butterflies. My favourite bit were the boxes the mooncakes were placed in, with these folds that you can open up like flaps and fold back again by pressing the gold parts down. Not sure if it is a new trend but Dragon-I also had a similar design for their boxes, except theirs was all golden with a patterned design. 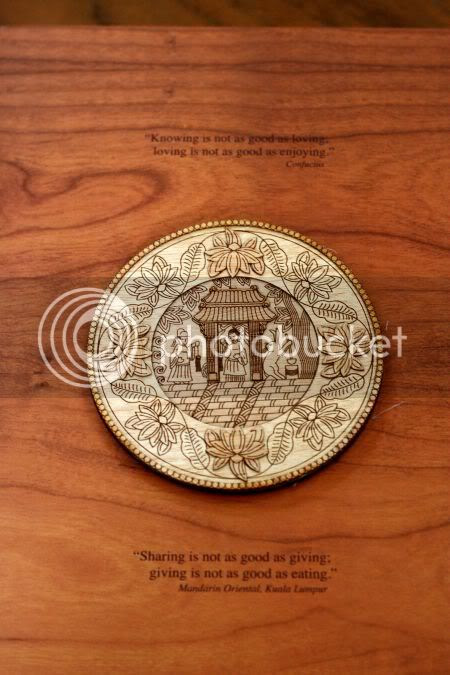 I love the wordings on Mandarin Oriental's box

Mandarin Oriental's box looked very regal with a round wooden carving. The picture of the carving is quite cute, as it depicts a couple in a pavilion carrying lanterns (maybe in some reference to how mooncake festival was one of those days in ancient China, where couples could meet) and a rabbit at the side. I also liked the wordings they had on the box, one from Confucius and another one from the hotel asking you to share and give. For corporate orders the boxes can also be customised, as samples are placed at the front of their restaurant. The same logo is also printed on their smaller mooncake boxes. 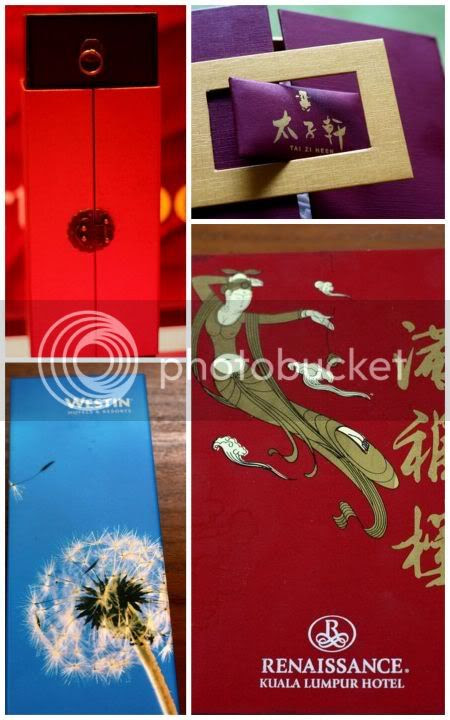 the many faces of mooncake boxes

Westin's packaging was the most modern looking with pictures of flowers - a lily for their bigger one and this dandelion in full bloom. Chynna's boxes are all lantern red. If you buy more mooncakes, they come in a tall box with shelves for the various flavours. Tai Zi Heen's box is quite adorable with a flap in the middle. For bigger orders, they even throw in free Chinese tea leaves in metal boxes. Dynasty's box features their trademark lady. She's also found in all their plates in the restaurant. 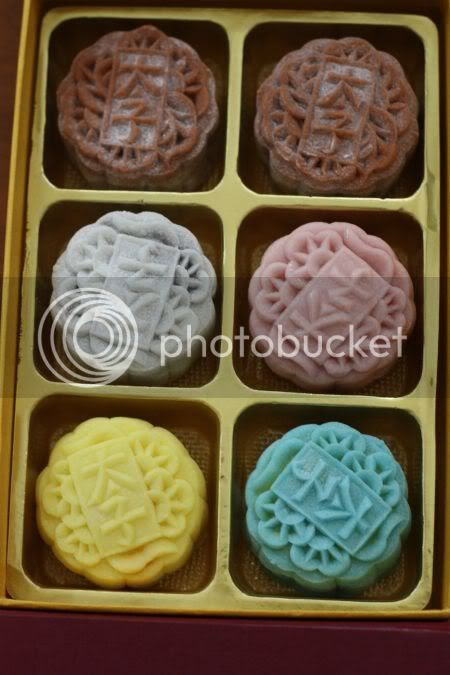 Tai Zi Heen's offerings, the bright blue one is filled with gummy bears

After going through seven hotel's offerings, if price is not an issue, Shang Palace's selections have my thumbs up. The packaging is lovely and the mooncakes taste fantastic albeit with a very pricey tag. While the white truffle scented mooncake is my absolute favourite, I also loved their coconut mooncake (reminds me of eating fresh and fluffy coconut candy!) and the cranberry paste version, where the tangy cranberries balance out the sweet lotus paste perfectly. Colours here are also kept subtle and natural. 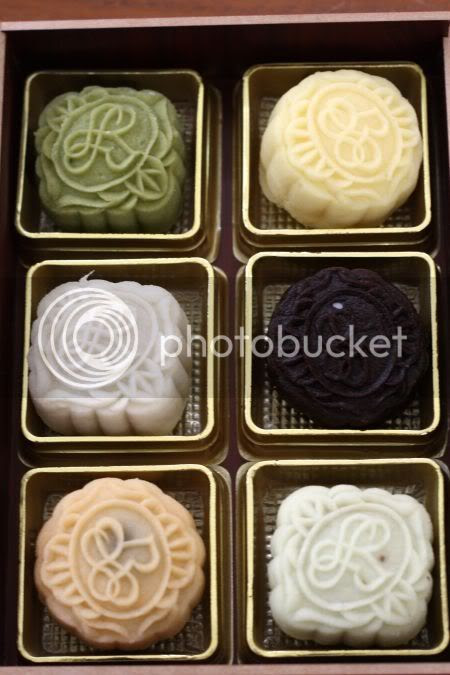 If I wanted my mooncake to be very different, I would zoom in on Mandarin Oriental's chocolate covered mooncakes. However, I didn't think very much of their snowskin offerings and preferred the chocolate ganache ones instead. Their box is also quite unique and great to keep after the festival is over. 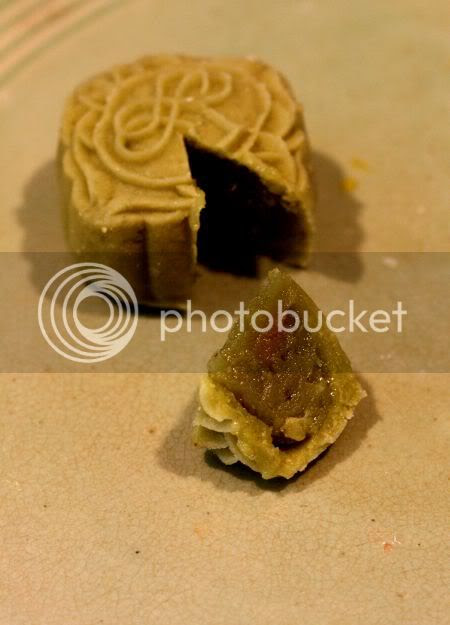 Li Yen's offerings are also top-notch with all their selections scoring high with us. While the selection is very small, they have maintained their standards well throughout the years making them a firm favourite every year. The packaging, which I didn't snap a picture of is in a metal box. A little old fashioned but nevertheless still quite pretty. 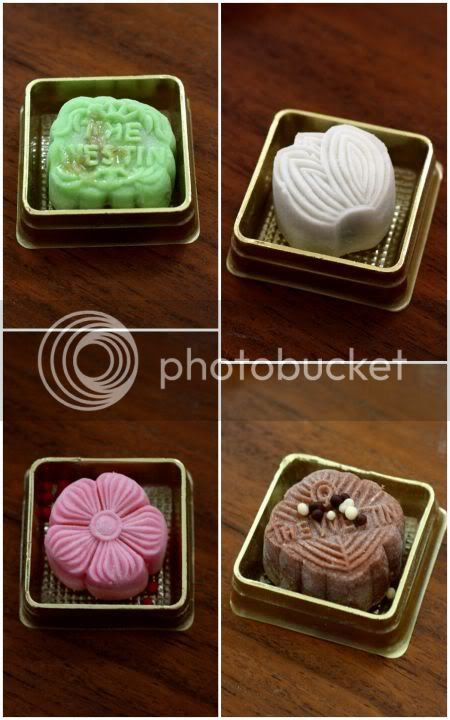 Westin's offerings were a marred I felt by their very soft snowskin texture. Nevertheless their durian mooncake was simply heavenly since it was all durian and not mixed with lotus paste compared to the other hotels. Tai Zi Heen's offerings were generally not too bad either, with some winners like their coffee and brownie with whisky offerings. Chynna's offerings were a little offputting with their very strong colours but the golden treasure with the tiramisu centre was very nice. Not sure what happened with Dynasty's offerings but they seemed to all suffer from a case of too much oil that affected the inside of their mooncakes. 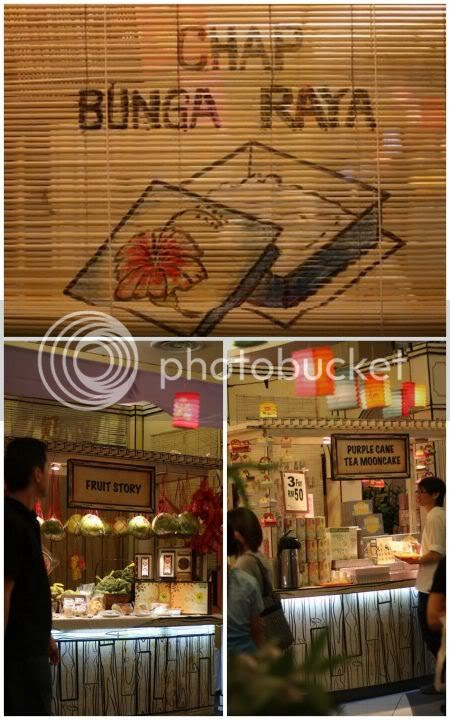 We were in Mid Valley yesterday and stumbled upon the mooncake fair and there were loads of different places to choose from: Westin, Shang Palace, Dynasty, Chynna, Purple Cane, Tai Thong, Haagen Dazs, Nikko Hotel and Concorde Hotel. There were also Doramemon shaped mooncakes. One unusual stall called Fruit Story was selling the never seen before large Teochew mooncake - flat and shaped like a large chapati baked in a charcoal oven. It had a stuffing akin to loh poh paeng. The stall was also selling fruits like yam and pomelo. Over in Isetan, they have Mandarin Oriental, Prince Hotel, Purple Cane selling their mooncakes. Unusual ones were Bonton selling mooncakes made from olive oil and another unknown company selling mooncakes made from seaweed. They taste like jelly mooncakes with a nicer texture and less sugar. Pretty nice to eat (I bought the pumpkin one to taste) but quite pricey at RM9.50 each.

Hope you will all enjoy the Mid Autumn Festival - remember to gather with family & friends that night to savour the moon & pretty lanterns, loads of mooncakes and Chinese tea (or wine according to Sean from Eat Drink KL).

2. Dynasty, Renaissance KL Hotel, mini snowskin mooncake with green tea with walnut (Size of
4.5x2.5cm for RM9.45) - paste was a little too oily and green tea aroma was not very strong.

1. Shang Palace, Shangri-la KL Hotel, mini snowskin crunchy coconut with honeycomb custard (Size of 5x2.5cm for RM22) - filled with fluffy coconut that reminded me of coconut candy. Not much taste of honeycomb though.

1. Tai Zi Heen, Prince KL Hotel, mini snowskin mooncake with vanilla custard and gummi bears (Size of 4.5x2cm for RM11) - sweet with not much flavour, the gummi bears add a chewy bite to the soft mooncake.

I tried the Li Yen M&C mooncake and I loved it. Not that the champagne taste is distinctive but the snowskin and lotus paste is really good! Thanks for the recommendation!

gosh, your entries have truly been the comprehensive guide to mooncakes for 2009!
i just read this article about hari raya-themed mooncakes made from dates this season. 1malaysia, 1mooncake, u could say... http://www.malaysiakini.com/news/113369

Sean - I think I saw them in KY's tweet one day but didn't know they are made from dates. Last wk, I gave one red bean paste mooncake to my Malay colleague to buka puasa with.

Wow, you really went all the way to check each and every outlet! You must have spent quite a bomb!! I truly appreciate what you've done. Many thanks for the review.

you folks in KL are lucky, know that?
in Ipoh, the mooncakes fair consists of only the usual Tai Thong, Foh San, Oversea n such.
but this year we've been sampling mostly traditional creations.
the Teo Chew one is akin to lou poh peng, correct, but with sesame seeds, and lots of dried mandarin peels (which may not appeal to most).
and there's one really cool cempedak with red bean version in Ipoh, and a creamy yam paste mini version from Ching Han Guan.

Did you try the Snowskin Bird's Nest Custard and Snowskin White truffles from Shangri La? They are surprisingly good.

A lot of surprising "fusion" moon cakes this year, and they have managed to coax my hard earned RMs from my pocket rather easily to my dismay.

Thanks for the brilliant guide to mooncakes 2009!

luv ur mooncake posts. erm, i think uv nearly covered most of it.

Aiyor... Did not know you covered the bird nest and choco truffles in another post. Just read them just now! Solli ar?

wow wow wow. boo, this is the definitive guide to mooncake 2009. great job!

the shang box is so much for fun that singapore's version!

i feel that mooncake are too commercialized and not really worth the money. but your posts on it are very informative-love it!

Wow ! Did you buy all that mooncake ? They all look lovely.

too many choices so I settled with two - last Sunday, I went to Prince Hotel and bought their bittersweet chocolate with whisky mooncakes.. and then Moet&Chandon mooncake at Liyen Restaurant, Ritz Carlton Hotel...

The Devil and I get our snowskin fix from Mandarin Oriental every year but this year, it's really disappointing in terms of taste. We used to buy boxes and boxes of the stuff but kept it to just one box this year. :(

AND it was a struggle to finish these mooncakes... normally we'd fight over the last one... now it's like, er, you have it lah, dear. LOL

wow! you eat ALL the mooncakes? that's quite a lot. hehe yeah very useful guide but KL's too far away for me to buy mooncake. lol

Haha.. you still haven't finished your moon cake post? Those are a bit too many for my consumptions. Anyway, I saw that many hotels are making moon cakes of different colors and flavors. I hope they were not too health hazardous. The TZH ones really caught my attention most with the colors and what? Gummi Bears?? sweat~~

ilene - must admit I rarely eat mooncakes but then I thought this year, it would be fun to review them.

j2kfm - they sound interesting too. I reckon, we're too commercialised, hence so many crazy varieties.

Paranoid Android - I love the truffle mooncakes, so incredibly good that I savoured each bite.

C&C - so many to cover, doubt one can ever cover them all! Will be in the hospital for diabetes if I ever did!

Nic - saw yr TWG tea ones and they look good too.

Foodbin - true, very commercialised and not like those olden days where you made yr own lotus paste and etc.

Borneoboy - yup, all from the pocket and not sponsored, somehow I didn't add the disclaimer to this one, since I was lazy to adapt it.

Leo - up to yr tastebuds or not?

Life for Beginners - ah so! Glad that I'm not the only person who felt MO's snowskin variety were very lacklustre.

Brad - am sure Spore has their own guide, like the famous durian mooncakes from Goodwood Park!

Criz - they look very fake though the colours. The gummi bears one, I felt the vanilla custard didn't taste great (no vanilla taste) and too sweet.