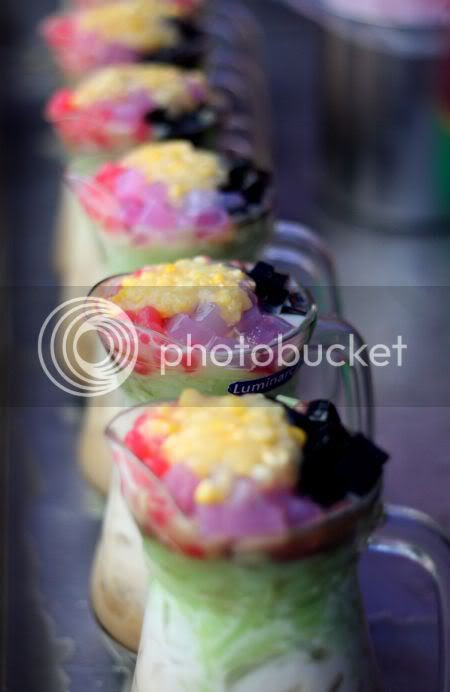 gorgeous colours in the cendol jugs

Shah Alam's Ramadan bazaar holds a special place in my heart, probably because it is the nearest one to my office. Due to its proximity, we often go there on a daily basis, checking out the numerous stalls and trying out most of the items. Since I was busy with work last week, we tend to visit the place quite late when there's a huge crowd. However last Friday, we made it early and I managed to capture one of nicest set of pictures of the bazaar. 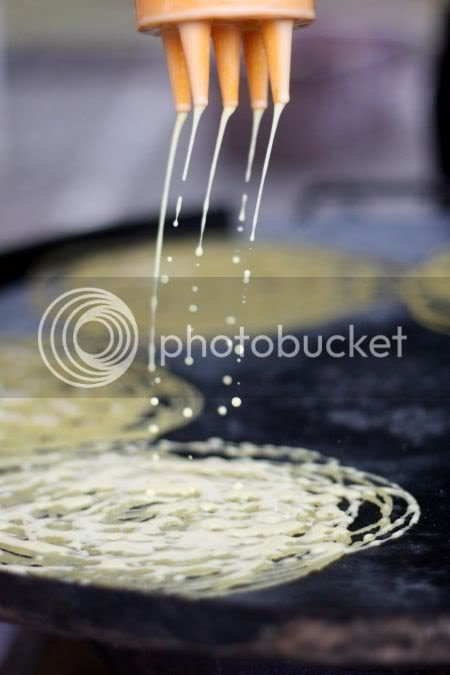 my one in the million shot - batter suspended in the air
If you're looking to snap pictures, make it a point to go early. You get to capture stacks of food laid out nicely, the stall owners prepping up their food and you don't need to jostle with the crowd for space. 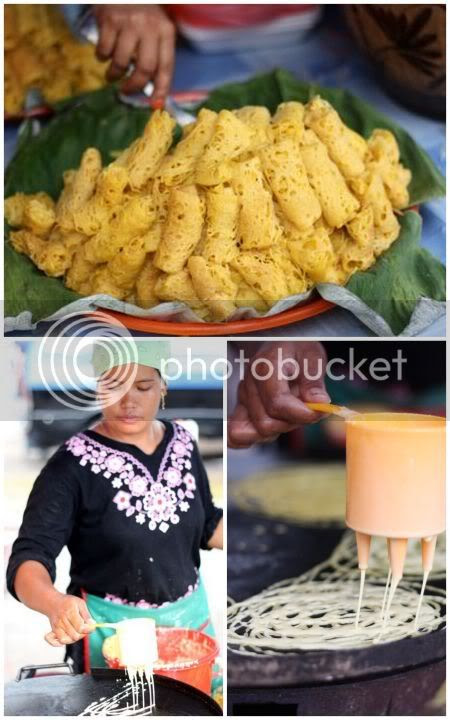 the art of making lacy pancakes, aka roti jala
The cendol jugs were out on display again this year - two varieties, one with pulut and another with a mix of colourful jellies. Managed to get fantastic shots of those refreshing looking desserts, perfect for breaking fast with. 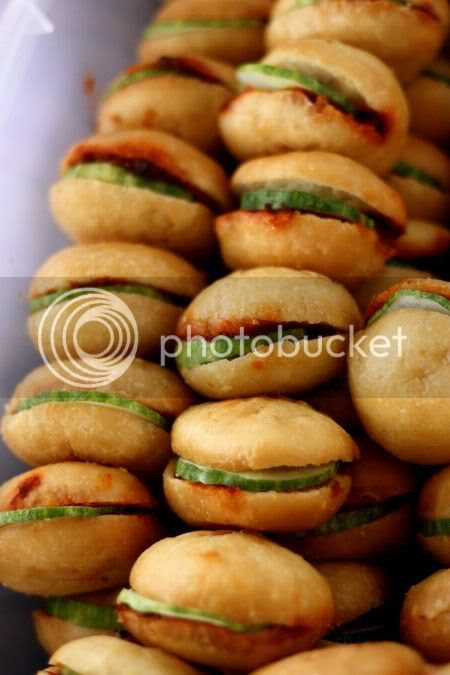 buns stuffed with sambal and cucumber slices
Another favourite was the roti jala stall manned by 2 ladies. I managed to even snap a gorgeous picture of the batter suspended in mid air, just when the lady was swirling it to form the net like pancake. Looked really good and they were serving it with either a sweet durian sauce or the savoury and more common chicken curry. 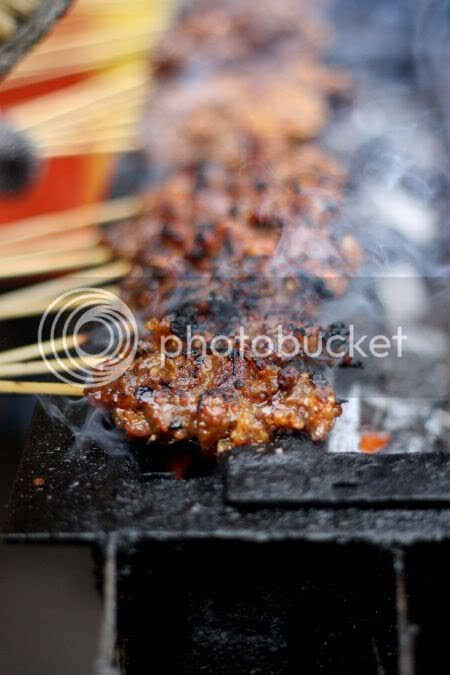 satay being grilled on hot charcoal
In terms of popularity, the stalls of Popiah SS Ali seem to have fallen badly in those stakes. No one seems to be interested in queueing for their popiahs despite them having at least 3 stalls around the bazaar. I guess discerning tasters have figured out the quality of the popiah has dropped tremendously. I've tried the original one in Ipoh, last year and to be honest, the taste has gone down hill. 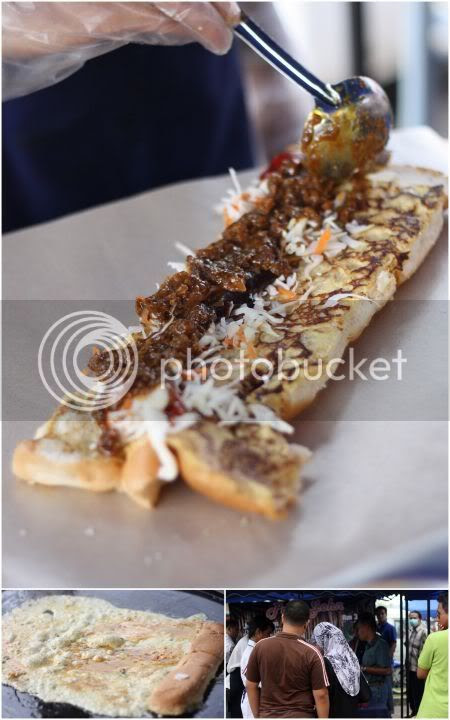 Papa John's infamous roti john
Instead, one of the most popular stalls is Papa John's. Loads of people queuing up for their Roti John, that looked so incredibily good with a choice of minced lamb or minced beef. I'm definitely going to spend some quality time queueing up for that roti john since it looks delectable. 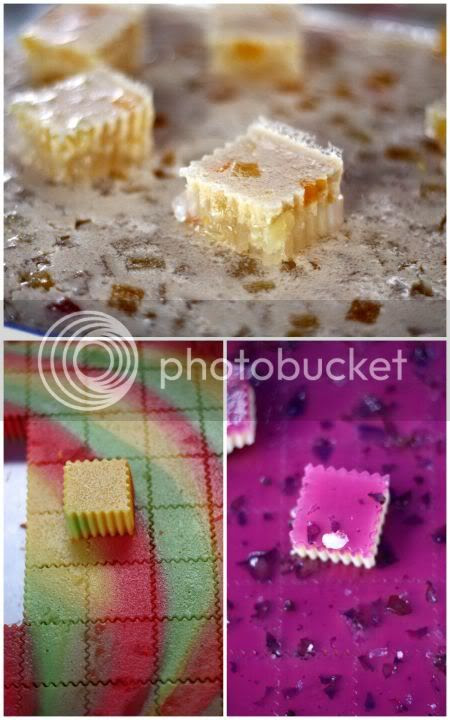 colourful agar-agar
What else was around? The colourful agar-agar stall was doing brisk business as usual - lovely colours all decked out in rainbow of colours. The sweet stalls always seem to finish the fastest, come a little later and they're all gone, especially those yummy or popular ones. 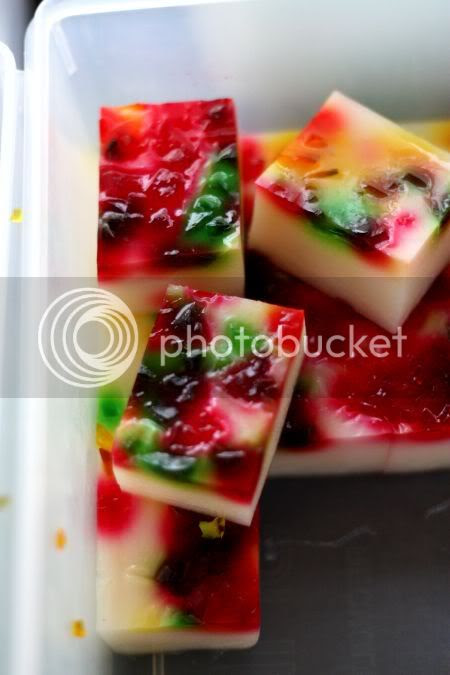 lovely stained glass agar agar
This year, there are loads of soy bean milk stalls - Soy Bean Station and Soy Bean Otai. Both seem to be vying for business with a few stalls around the bazaar, selling soy bean milk and tau fu fah flavoured with gula melaka syrup. 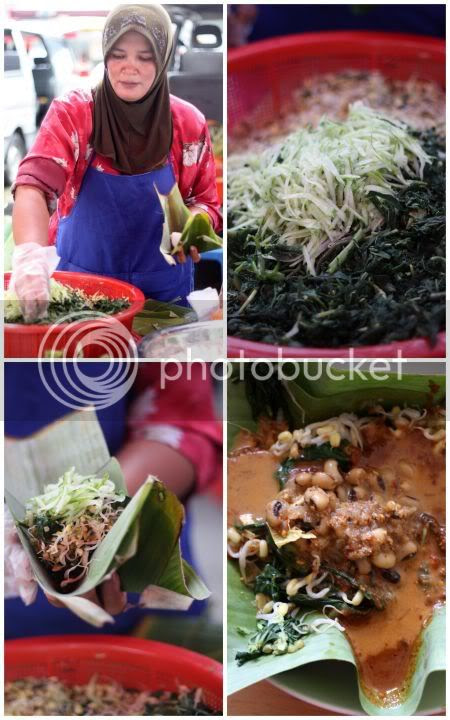 my favourite item in the bazaar - pecal Tanjung Karang
My must-have at this bazaar - the pecal Tanjung Karang for RM2.50. Similar to gado-gado, I love this simple dish of beansprouts, sweet potato leaves and compressed rice cubes (nasi impit) drizzled with their unique sauces. They give you two types - a thick and spicy peanut sauce with another watery one known as the lontong sauce with beans and shredded coconut. Give it a try, as it is absolutely yummy stuff. 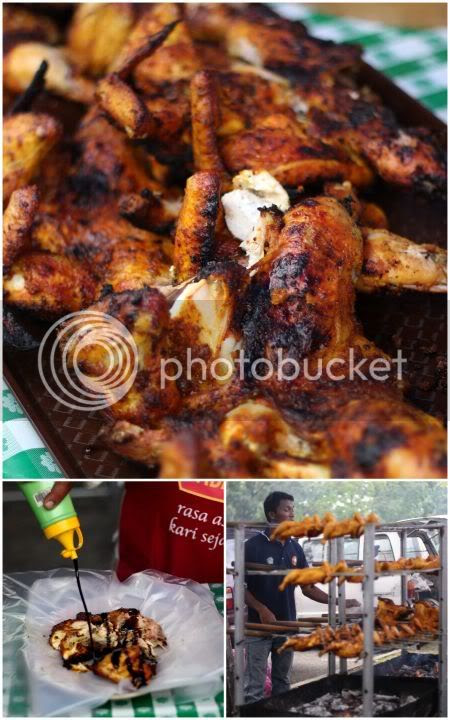 juicy and succulent ayam bakar kenyalang
I also like the ayam bakar kenyalang (RM18 for one bird) - roasted chickens on charcoal stuffed with herbs and drizzled with a sweet soy sauce. The meat is juicy and succulent. Also spied in the bazaar - western favourites like pizza, meat kebabs and chicken chop. For more pictures and explainations on the bazaar, see my Flickr set.
Ramadan Bazaar Shah Alam
Section 13
Shah Alam
Bazaar starts from 4pm onwards until break fast time, about 7.30pm
Posted by boo_licious at 2:00 PM

i am mesmerized by ur shots la, especially the one in a million one! crazy!

the little agar sitting on top of the plate of agar is screaming to be eaten.. which reminds me i got milo agar at home.. yay!

Such vibrant colours! I've always wanted to visit this bazaar, but the traffic jams leading to this place are crazy!

I'm working in Shah Alam too and believe it or not, I have not been to a Ramadhan bazaar in my life!

It's time for me to buaka puasa de!!

These must be the best of the lots of shots that you have taken. The sate on the grill has my vote!

Wooho! the roti jala shot is amazing!!! How long u had to stand there or u just got lucky?

Brings back fond memories of my visit to this Ramadan foodfiesta, which was inspired by your posts in the first place :-)

j2kfm - had them the last time I was in Ipoh. Really bad stuff, half filled and the deep fried prawns weren't crispy anymore.

pure glutton - yeah it gets crazy here, since it is such a big bazaar. Go early and you can avoid the jam.

eiling - time to go? Visit the place with yr colleagues, as it is quite fun to shop for food.

qwazymonkey - one of those fluke shots I guess, you get when you snap away.

Julian - hope you're enjoying Abu Dhabi. wow, didn't know you were inspired by an old post to visit this place.

I am a longtime reader of your blog, and am a KLite transplanted to the US. I really love your coverage of Ramadhan bazaars throughout the years and almost drool whenever I read them. Keep the pics coming!

omg, i'm salivating now. i miss the bun with sambal in it and papa john hot dog bread. its always a must whenever i visit these fair.

Sigh, I still don't have time to visit any bazaar.

I absolutely love reading your blog during Ramadaan. Year after year, you're always able to capture and detail soo many Bazaar. Soo jealous we don't have anything like that in Sydney.

hahhaa... another one I have yet to read... Sri Serdang!

oh these pics makes me drool.heheh.

if there's one bazaar tht i havent gone yet, its the Shah Alam one!!
too far for me but for pecal Tanjung Karang, durian roti jala and omigosh, tht chendol!! I will head there soon...very soon ;p

Freaking gorgeous shots Boo! I love that deep fried dough with sambal. Sigh so bad for you. Am searching out kuih stalls.

It has been long since i had roti jala and your pics makes me craving for it now oh my salivating ;) . So many colorful agar2 wonder whether the nice is "colorful" as it looks though .

It has been long since i had roti jala and your pics makes me craving for it now oh my salivating ;) . So many colorful agar2 wonder whether does it taste as "colorful" as it looks though .