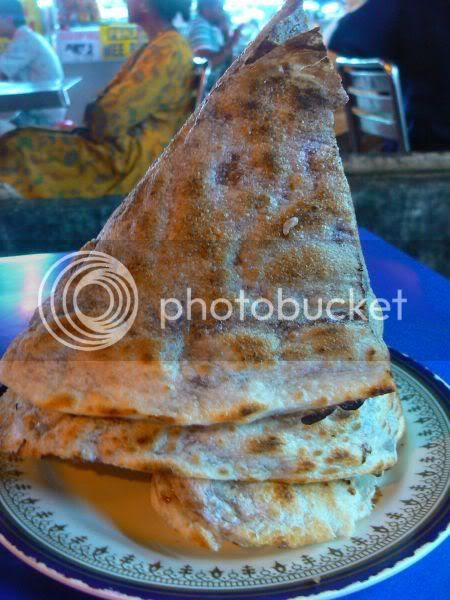 Time to do away with all that bad food karma. A new weekend looms ahead and I am ever hopeful I will find great food out there somewhere. Since it's a Fly-day, I thought we should celebrate with a treat, we are so fond off. 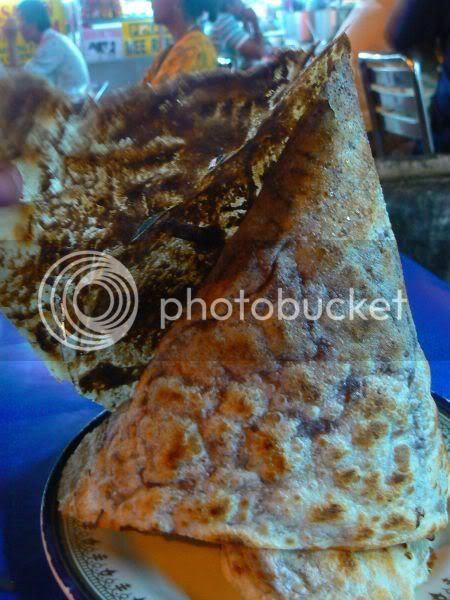 Always around when we need it, roti canai or the super-stretched version aka roti tisu is one of the best inventions ever. Filling our rumbling tummies, at a minimal cost, there are loads of versions of this perennial favourite. A result of the tough competition between the mamak stalls, you get roti canai with the pungent durian, diced up and fried to be roti canai goreng or stretched thinly and cooked till crisp, to be an enormous roti tisu that can feed at least 3 people. 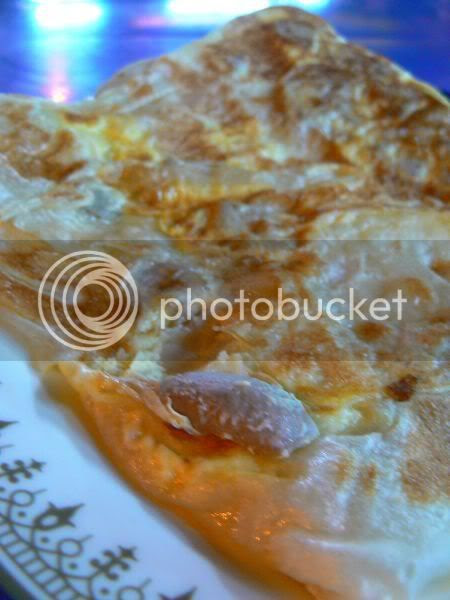 This particular shop in Petaling Jaya Old Town, opposite the wet market is one of those, which comes up with interesting varieties. Their roti tisu special is unlike the thin and tall version from Kayu Nasi Kandar, but has a hidden element within the crisp folds - a layer of decadent Milo powder and condensened milk. Very sinful but oh so delish, that one piece is never enough. Unfortunately, they don't do Milo Ais like the Milo truck (can someone tell me, why does Milo taste so much better from the green truck and in small paper cups?) hence, you have to settle for their Milo Shake.

They also do great roti canais here - fluffy and not too oily. Splashie Boy had their roti mushroom - a fluffy creation with egg and canned mushroom slices. Originally a stall, business has been so good, they have now shifted into a shoplot. Aside from rotis, they also serve mee rebus, mee goreng, tandoori and etc. Tables and chairs are laid outside, making it a pleasant dining experience especially during this current hot and humid weather.

(Halal. Open 24 hours and right next to PJ Polyclinic.)

Disclaimer: The opinions expressed here is entirely based on my personal tastebuds and may vary for others. The reviewer also declares that she has not received any monetary or non-monetary compensation from the restaurant for writing this review.

Tagged with: Roti Tisu + Malaysian Food
Posted by boo_licious at 1:05 AM

I am already hungry! Yes condensed milk makes it much better. It works with pancakes and roti canai and even murtabak. Eat a lot of them in Thailand. Will be looking for food soon.

i nvr fail to come here for their shakes every time i go home. they do nice milo/horlicks/neslo/nescafe/banana shakes. these contemporary roti's must be a new thing. hav u tried their roti milo tho? not bad lah, but could do with more milo :D

omg..i thought roti tissue is evil enough, with milo?? oh dear..i think i need a doctor beside me while i eat..to check my blood pressure and cholestrol levels..

i thought i was the only one who felt that way about that milo from milo truck! i thot coz it was that childhood excitement element attached to it when they visisted school those days.. but yea... it still different in some ways.. smooth.. jus nicely balanced.. maybe its been blended and chilled.

i love milo from milo trucks, and nescafe from their trucks as well. probably cz their chilled, and FREE (=P) ... roti tisu with milo powder? hmm, thats new ...

no wonder the roti tisu looks so dark, at first i tot it was burnt XD

oh jeez, when I regained consciousness after looking at your delicious photos I remembered that I came here with a purpose! Boolicious I'm tagging you, because I really enjoy your beautiful pictures and would like to see your favorites over the years...

Kids always love roti tisu..nice & crunchy, but doesn't actually fill us up, kan ? My favourite at mamak is Tosai. :)

Is this mamak shop new? Tak pernah dgr pun when I was working there. Looks so delicious...

Indeed I am sorry,
Please link to this site.

Hello, this site is nice!!
I already link to this page.
If you don't mind. Please link to my blog this URL
http://foodsandfoods.blogspot.com/

I have been hooked to roti milo of late. So sinfully chocolatey with a dollop of planta. The roti tisu looks good leh. Must go try it out soon.

I think I know this stall. Very near my cousin's house. Wah, roti got mushroom.

roti and choc? new to me! wah.

As an Indian fellow living in Australia, all I can say is that I'm utterly shocked at the way Malaysians have mutilated Indian fare.
Putting CHOCOLATE on roti paratha? Putting EGG and MUSHROOMS on it? I reclined back in horror as I read someone gleefully mention how roti tastes good with condensed milk.
Good God people!
Come to your senses! This is NOT Indian food, and certainly not what Indian food should be denigrated into!

Jun - you must have been a regular here ever since they were a stall? They have done well, expanding from a stall to a full fledged restaurant.

Joe - the doc will probably tell you, this is the payback for eating cute little hedgehogs!

kaleiselvi - you're not the only one, as my friend also says the same. Wonder what is that special blend as it tastes so gooood!

j2kfm - hi Five! Looks like we also have that in common. I guess these places, want to capture a new market with these new fangled rotis.

olasnavigator - quick, run down for some rotis...

ling239 - hmmm, I also thought that too, as I imagined it to have milo sprinkled on top, vs the insides.

thxs foodhoe for the tag!

yasmin - by the time they stretch, it..it isn't substantial anymore!

flower - it used to be a mamak stall open at night, maybe that is why?

daphne - yeah, these mamak fellas keep coming up with these ideas.

glenn - yeah, definitely not truly Indian food here. This restaurant owner, came up with these new styled rotis to appease the younger set, who like to hang out at these places.

i went there just now and i asked for everything u mentioned here.. i hope it's just that he doesnt understand what am i talking about because he said there's no such thing as roti mushroom/cendawan and their roti tissue special hardly had any milo in it... i wonder what happened?