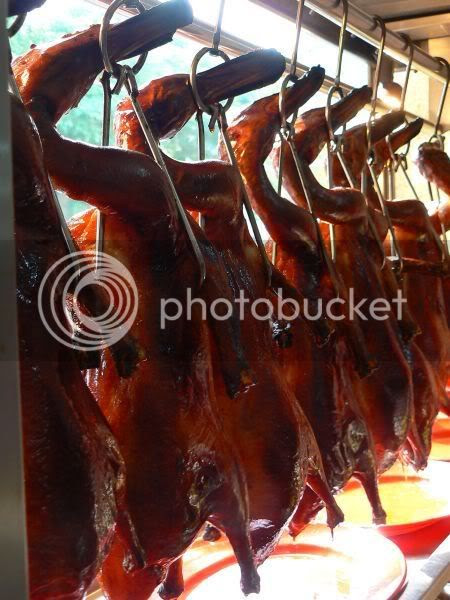 What a weekend! Unfortunately, it wasn't a weekend for great food, as the places we tried were dissapointing. Don't worry, I will share with you all the sordid details later this week. I did get to try something I have been meaning to sample for the longest time ever. I first read about this place in Damansara Uptown from the Chinese papers. Seems the roast duck here is so popular, there will be a long queue waiting patiently for their turn. 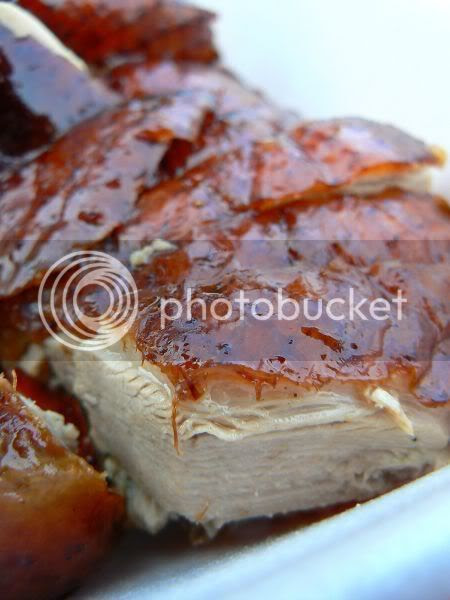 juicy roast duck, too bad about the skin

I inadvertently found out it opens pretty early during the day, when we drove past yesterday afternoon. Splashie Boy spotted his dream drive - the Hummer parked nearby at the luxury car showroom. While he drooled over the Hummer (just RM580,000, a song compared to its original price of RM630,000), I took my time at the roast duck stall. There was a small wait, which gave me a chance to check the place out.

Sharing the same premises as Damansara Hokkien Mee, the ducks were fresh from the oven. Everytime, the fella split the duck open, to tip the juices out, there would be small puff of smoke. I asked the owner, what was the difference between Guangzhou roasted versus the ones we get, and he was very non-comittal, just saying that it is the same. A whole duck is RM40, a half is RM20.

As I packed the roast duck home, I quickly snapped pictures of it before sampling a piece. The meat was juicy and tender. However, the skin wasn't crispy. I suspect this could be due to them not bathing the roast duck with hot oil, before serving it. Nevertheless, the roast duck still tastes pretty succulent. I would imagine, it will taste sinfully good (and cholestrol laden) with a plate of fresh-from-the-wok midnight black Hokkien noodles with super guilty deep-fried lard bits.

that place susah to get parking also... good idea to pack and go ^_^

when u mentioned the name got Chef, i tot this duck gonna cost a bomb... Rm40/RM20 sounds very reasonable... will drop by soon, wonder if its open at night

i love your blog! im gonna bookmark this for future use when i go back to malaysia =)

not crispy meh? but from the looks of it, very temptingla...and the way they hang their ducks, so uniformed! :)

Roast duck must have crispy skin la wei. But from the photos, it looks delicious leh.

ling239 - yeah, that place forever no space to park!

bernsy - it's a nite place...caters for the Hokkien Mee patrons also.

jaded - yup (unfortunately, they are not wearing white coats?)

fie - hiya! glad you like the blog. Hope you get to find great eats when you return to Msia.

j2kfm - sadly, not but I quite like the juicy taste.

nicholas chan - loong foong still good. this one the skin is softer but juicy and tasty.

When it comes to roast duck, only I-Po for me :o)

Most best part of a roast duck is the crispy skin, this one no crispy skin ar... :(

sigh. nothing beats sunrise duck rice. i love the flavours there.

wmw - a bit far though for me, when I feel the urge to eat such duckie.

mimi - yeah, weird as I thot the skin not crisp. Maybe I have been spoiled by Sunrise and Loong Foong.

wow. look nice. but i m not duck lovr. sorry.

There's a restaurant @ Paramount Garden, PJ which serves delicious roast duck too.. not Sunrise, it's nearer to Restaurant O&S. (Imagine O&S is on your right, drive past it, the first restaurant after the junction on your right is the one).

There's also another restaurant in Cheras, Taman Connaught (I think), that serves absolutely delicious Char Siew.. A couple of yards from the BP Station.

My... i so miss those hokkien cha!! I wonder if I could tapau some, freeze it and pack it properly to avoid alarming the sniffing dogs, and bring it over to the UK.. hmmm...

lainei: u mean the sunrise roast duck at S.E.A. Park,Petaling Jaya? Yea, the duck is good. actually im from penang, been there for 2 times, 1st visit was good, but very disappointed at the second time. i just wonder, is that because of weekend affected the food quality? coz pretty crowded compare with weekday.

boo_licious: there are serveral steps can makes the duck cripsy
1. put the honeys on
2. air dry the duck
if without these 2 step, or not enough time to let the duck dry, you couldnt get the perfect crispy, no matter how u fry it!

Try Long fong then u wont go bek to sunrise

Some style is not crispy 1.