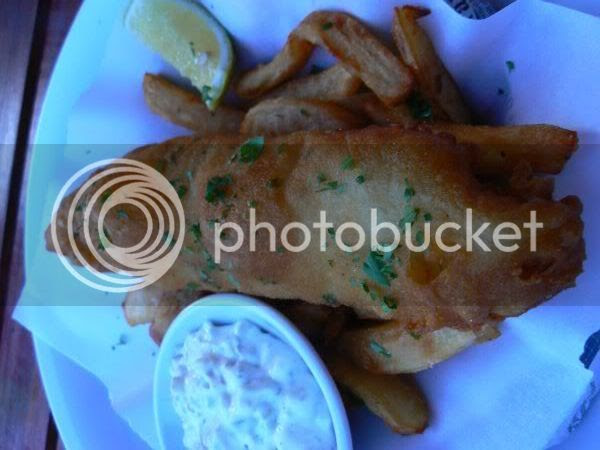 I always associate fish and chips with Fridays. It's probably because in my first year while studying in England, the dining room at my halls of residence will serve fish, chips and peas without fail on Friday. Believe me, I got sick of fish and chips since it became a weekly affair even though they did switch the type of fish served each week. Luckily it was Friday hence you had the option to skip dinner and eat outside.
On Wednesday after lazing around the past few days, we decided to try out this place at Changkat Bukit Bintang. It had been a bright afternoon with sunlight lingering on despite it being the evening when we sat down at the restaurant. We chose to sit outside the restaurant at their wooden benches to see the world pass by. Essentially a casual restaurant, there's no menus here and you choose your food items from the blackboard. It's also a nice place to chill out and great for nursing a cool tall beer especially on the bar counter. 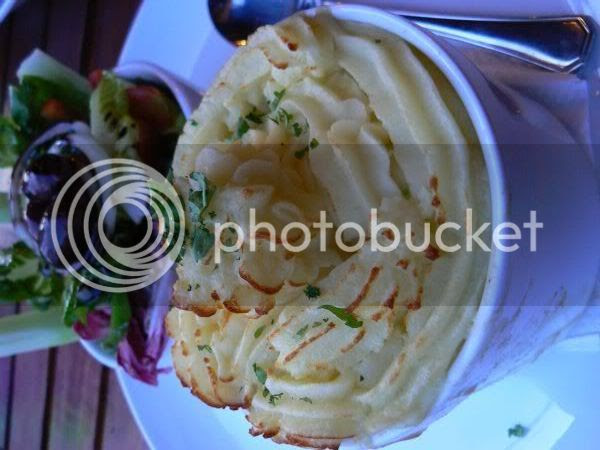 Splashie Boy ordered the fish and chips which came in a nifty presentation. Scrunched up newspaper at the bottom with a piece of kitchen paper holding the chips and fried fish on top with tartare sauce on the side . Definitely better than the newspapers they use to wrap the fish and chips in England. You can select which type of fish you wish to have fried ranging from the Dory to exotic fish like the Parrot Fish and even Salmon. He decided on the Dory which was not bad but not as fantastic as the version we tried in PS Cafe. Maybe this was due to the fish but the fried batter wouldn't stick so you had to eat the crunchy bits seperate. Heard quite a lot about the chips which is said to be home made. Kinda dissapointing that day as they were slightly too overfried with some too crunchy bits.
I had the Cumberland Fish Pie (RM25) with a side salad. You can choose what side you wish whether it's more carbs in the form of colcannon (something we don't see much here since we're so far away from Scotland) or chips. Portions are super generous and underneath my mash potato topping, I found chunks of white fish and salmon mixed with peas. The sauce was creamy but not too rich which I liked. I had loads of salad - black olives, gem lettuces, frisee, cucumber sticks and red cabbage doused in olive oil and balsamic vinegar.
Aside from fish and chips, they also serve a variety of pies which sound tempting, posh nosh with lots of fancier fish dishes plus Roast Beef and Yorkshire Pudding on Sunday. Will definitely make another trip here as I love English Pies and who could resist Roast Beef and Yorkshire Pudding.
Magnificent Fish and Chips Bar
28 Changkat Bukit Bintang
Kuala Lumpur
Tel No: 03 - 2142 7021
(Pork free. Open from breakfast till late every night. Also serves all day breakfast items.)
*Disclaimer: The opinions expressed here is entirely based on my personal tastebuds and may vary for others. The reviewer also declares that she has not received any monetary or non-monetary compensation from the restaurant for writing this review.

Tagged with: Fish and Chips + Fish Pie
Posted by boo_licious at 9:20 AM

ur fish pie and fish n chips remind me of my london trip..pure slaughter..11 pounds for my pie and 17 pounds for my fish n chips..makes me want to visit this..but the parking is such a big hassle! actually whereabouts is dis..i m so bad with roads..i only know how to go to Max haha

Actually Fish and Chips in Aussie is not so bad provided they have unlimited supply of chilli sauce.

joe - this place is opposite Frangipangi. Yeah parking is a nightmare here but we found spaces behind. Still remember the yummy pies I had in London last time. So good plus the steamed puddings with custard.

precious pea - Msianed version of fish and chips with Lingam chili sauce? U like potatoes then this pie will be good for you. Very creamy and soft.

I told myself that if i ever open my own cafe, I must specialised in potato dishes. But somehow, tak jadi la.

Hey Boo! My residential college used to serve fish and chips EVERY friday too and, like u, i always found it a good excuse to go out and discover different makan places in adelaide ;p thank god i was only in college for the 1st 2 yrs! *phew!*

okok..let me try this place soon..i think have to go early evening..go on sat nite sure cant go 1 lor..yes the fish pies in london were awesome..saw the pics properly..slightly different 1..in london its flat and kinda crusty on the top

The best fish and chips I ever had was in Melbourne. I suspect due to the freshness of the fish, even better than the "original" I had in London, all wrapped in newspaper at that.

Pheww..... seems like everyone hv an overseas "fish n chips" experience except me . :X

all this talk of fish and chips makes me wanna go on a holiday soon. can't wait!!!!

precious pea - LOL! You can call it Spudville instead of stuckyville. Maybe a bowling alley somewhere and a lawyer?

jun - I think it's just a ploy to get us to go out! 2 yrs sounds bad, mine was 1 year before I self catered.

joe - hope you like it! Think Sat nite, it will be packed with people.

kenny mah - that's the thing abt oz food, they just can't go round as their ingredients are so fresh and good.

jackson - nah, we just comparing since it's such a national dish over in England.

teckiee - LOL! Quick go eat some char siu and siu yoke or else everything will look porky to you.

lemongrass - wow, England or Australia soon? I can imagine all the yummy food you will get.

i have been meaning to try this place for some time now... guess I should go soon!