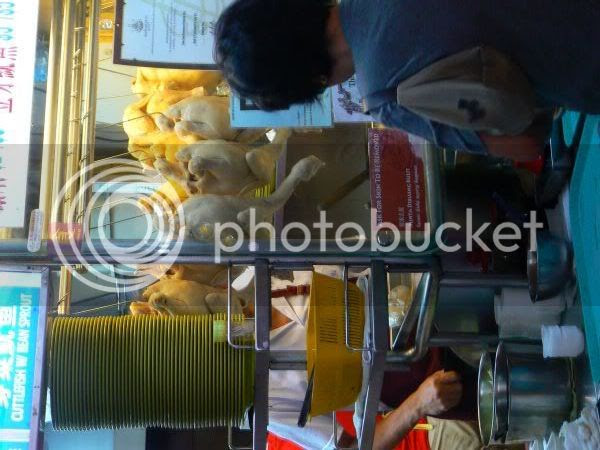 Last post about my Singapore trip so bear with me one more time. Ever since I was a little girl, whenever I visit Singapore, a must order has been their Hainanese Chicken Rice. Not sure why but I always think their version is the best ever I have eaten. My mother shares the same craziness for the chicken rice hence she's always game for it too. I still remember how they even brought me when I was a teenager to eat the famous and super pricey Hainanese Chicken Rice at Chatterbox, Mandarin Oriental Hotel once when we stayed there. 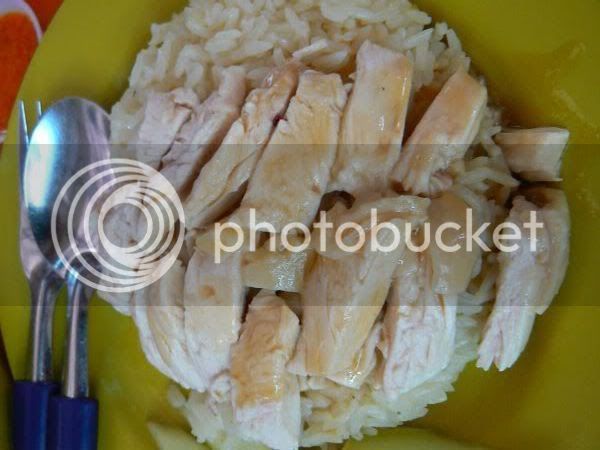 In the pursuit of my childhood dreams, I dragged my friend and Splashie Boy to Maxwell Food Centre to look for Tian Tian Hainanese Chicken Rice after reading about how good it was. If you're a fan of Anthony Bourdain, well this is where he first sampled Hainanese Chicken Rice. Since we were early, I went to explore the food court and found Zhen Zhen Porridge. The guys got the task of waiting for the chicken rice stall to open for business. Before they knew it, a queue started forming in front of the stall (they had both their heads buried in the Sunday papers!) hence they only got to be number five in the queue.
By the time I got my porridge, the queue was super long but luckily we had our chicken rice. Although it tastes pretty ordinary, I really love the rice. My mother has a theory about why the Hainanese Chicken Rice always taste better in Singapore - it's the better quality rice grains they use. I totally agree with her as the rice grains here were nice and seperate and cooked to perfection. Not the fluffy type but al dente grains tinged with a slight fragrance of the chicken. The chicken was nice and tender but nothing much to shout about. If I wasn't too full with my huge bowl of porridge, I would have ordered just one more bowl of the heavenly rice. Oh and my attempts of getting a nice picture of the man chopping the chicken was dashed as he had this huge stack of plates blocking him all the time! 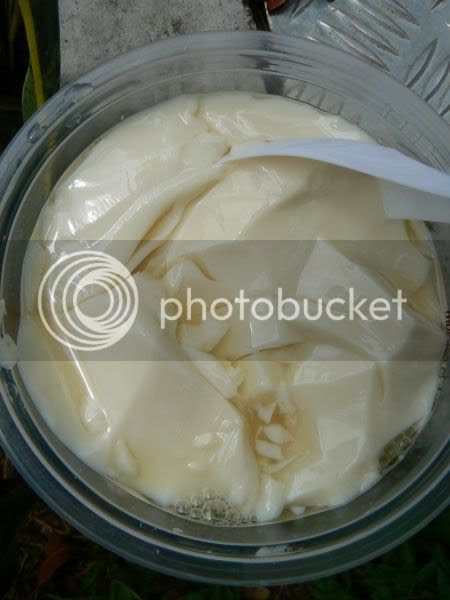 Something else which is totally out of context, I had the soya bean curd (tau foo fah) from the Mr. Bean, the next door stall and wow, it was so good. So smooth, it melts in your mouth and not too sweet either. It's a texture I have never tasted in Malaysia before as it's barely set. Really excellent stuff. They even have a cute little soya bean man as their logo if you click on the link to their website.
Tian Tian Hainanese Chicken Rice
Stall No 10
Maxwell Food Centre
Singapore
(Closed on Mondays. Open from 11am until 8 pm. Get here early to queue as they get super long!)
*Disclaimer: The opinions expressed here is entirely based on my personal tastebuds and may vary for others. The reviewer also declares that she has not received any monetary or non-monetary compensation from the restaurant for writing this review.
Tagged with: Singapore Food + Chicken Rice
Posted by boo_licious at 9:50 AM

so you another fan tong ar..haha..i hav to cut dwn my rice intake also..last time i can siao siao 2 bowls every meal

MM..now you got me craving for tau foo far..maybe i go Hartamas shopping centre to grab one. Is the one opposite wok hei any good?

Now I know what I want to eat for lunch! Chicken Rice and tau foo far. lol. but yeah, it looks good!

xiu long bao - it was super duper smooth. Now I feel like having some.

joe - actually me no "fan tong". It's just when I get such great rice, the urge to eat a lot of it esp since it's only available in Spore is immense.

precious pea - sorry, no idea as I have not tried before.

jasmine - glad to inspire you and yes, it was really good food.

tummythoz - I think chicken also depends on which stall as some have those which the meat is too soft. Yup, just that combo in Spore is good for me too. My mum said even the food court chicken rice can beat Msian hawkers and I do agree with her as the rice they use are such better quality.

Wah ... good good ... at least some directions to Singapore food ! I am going to Singapore next weekend. Let's see how many articles can I churn out from this visit. Hehe ... I am gonna do some Salsa Club reviews too hehe. And Boo .... read my latest article ... one which you contributed to my inspiration.

Have fun in Singapore. Only problem with these hawkers is the super popular ones you need to queue. Jackson also has a good guide on the places he went too. Glad you liked New Formosa's food.

Your descriptions on the tau fu fa sounds so unbelievably good. Must go and taste for myself this ultra-smooth Mr.Bean!! ;)

tankiasu - very good stuff! Available in Singapore only but it's a franchise so someone should bring it here as it's so smooth.

i was there too when i was in singapore last weekend!!!!!

eric - hope you liked it! and the queue wasn't too long.

the chicken looks sooo smooth...i can just imagine how delicious and flavorful it is in the mouth..MMmmmmm...*Drools*

Tian Tian is pretty good, but there are quite a few stores in Singapore that are good as well in comparison.