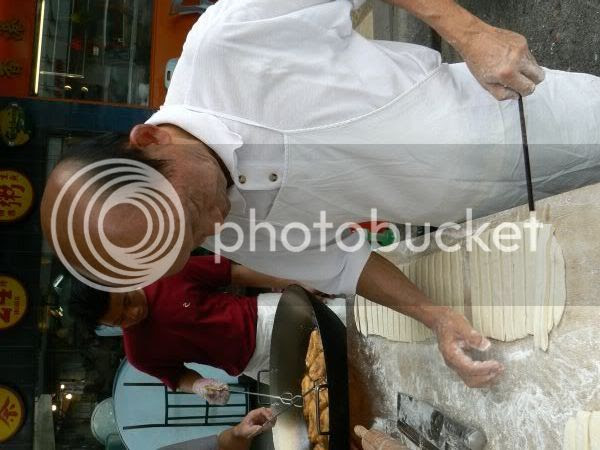 Apologies for not posting yesterday but I took a nice break with the public holidays - didn't even go near a PC at all. Feels so strange to re-start the week again on a Thursday hence I have been dragging my feet today making the most of the break. I've been debating on how many Singapore entries I should make. I can imagine it will be boring for those living in Malaysia to read about food elsewhere hence I will balance them out. 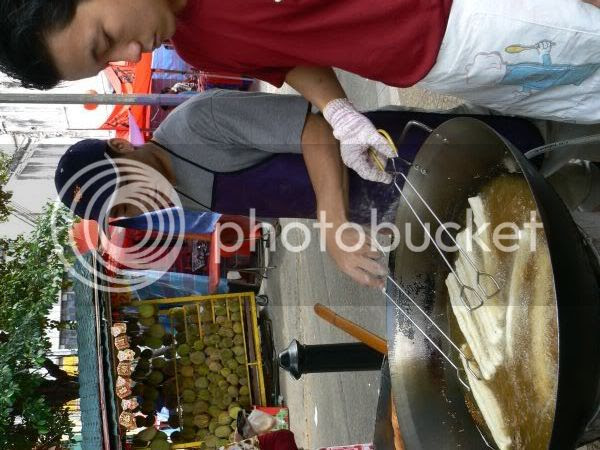 Something close to home, deep fried chinese crullers or more popularly known as Yau Char Kuai. This old timer stall which has been in business for almost twenty plus years is located just off the tourist belt of Jalan Bukit Bintang. Popular among locals and tourists, you queue up to enjoy freshly fried fritters. An old couple runs this stall together with two helpers. The old man will prepare the fritters. See how he cuts them to strips and uses a thin metal rod to press a line on it. He actually places two parts of it on top of each other before slipping it into the hot oil. It'll puff up in the heat and start looking like the yau char kuais we are familiar with. 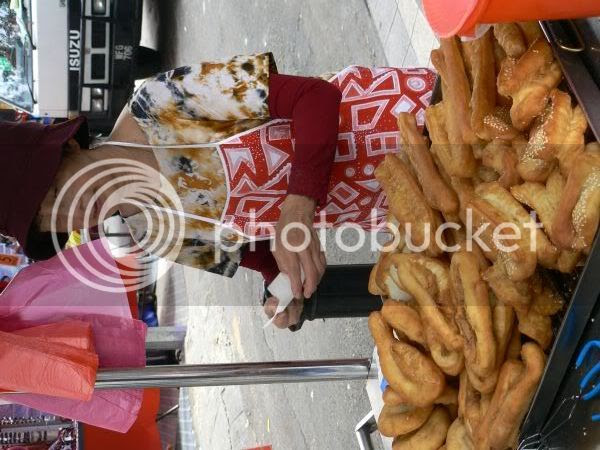 Aside from yau char kuai they also sell other varieties like the ham chin peng (filled with red bean paste), ngau lay so (which has a slightly crunchier middle), cup chung which has a glutinous rice filling and my absolute favourite, mah kiok. Literally translated as horse shoe, these fried fritters has a generous sprinkling of sesame seeds making it slightly sweet and saltish. They have a different shape for the mah kiok here as it's not shaped like a horse shoe but more like two pieces stuck together. Tastewise, this is so much nicer as the fritter is light as a feather with just a hint of oil. You can get a piece for 70 sens or just go for three pieces for RM2. A once in a while sinful indulgence but you'll find yourself returning here again and again for the fried items.

(Pork free. Open from Monday to Saturday from 3 to 9 pm. If you're coming from BB Plaza, cross the road towards Jalan Alor at traffic light. Walk towards Jalan Alor and you will see this stall on the left hand side in front of the corner restaurant.)

Tagged with: Malaysian Food + Yau Char Kuai
Posted by boo_licious at 9:55 AM

My fren and I are basically foodies that enjoy eating as much as you do. We was just wondering is there anywhere we can join the next food blogger gathering althought we dun blog. I read about the gathering in Sandias and guess it will be fun to eat together with a bunch of ppl who share the same passion as we do.

hey, step by step yau char kuai...cool! Heard so much about this place, but still haven't been there due to the odd timing (i.e. not open during lunchtime).

Used to see long queues at this stall. Odd but don't think I've tried it before though. Is it on d salty side? That would b good to go with plain porridge!

Yau Char Kwai .. wow ... I know a few places which sells heavenly ones. You know there are some good ones in Taman Cheras ....

This is a good place to get the crullers but don't come down to this corner often. I get my fix at Cheow Yang stall. :o)

Hi there. I read your blog quite often but never thought of writing a comment.However, seeing as I know this stall rather well, I thought I would comment :)

It's one of the best places that sells ham chi peng and the best cup chung in KL. The stall has been there for ages, and I used to go there almost every day ever since I was 7. I am now 27! :)

Ooooo...crullers and coffee are one of the best breakfasts anyone can ask for!

There is an excellent stall selling crullers in front of the previous Chau Yang Coffee Shop in SS2/6. One can hardly buy any if not pre-ordered!

The food at the last picture looks delicious.
I like the food selling outside.
I want to go there! :)

similar to wmw, i'll get my usual crullers at chow yang area..but this sure looks good!

feijoa - What a coincidence, just ate at Magnificent on Wed nite. Eaten at Wendy's before but didn't have a great experience there though. Next gathering will be an informal one though, just whoever wishes to join so no problems but no guarantees on how many food bloggers turn up. Will post up details of the next RSVP once I get the flyer.

lemongrass - when you have meeting around town then you sneak and get some here. Well worth it.

wmw - yup, heard a lot abt the Cheow Yang stall too. Must do a comparison but this is by far one of the better ones.

anita - wow! You're a regular here. Was introduced to this place by my friend and the fritters are so yummy.

bayi - yeah, the cheow yang one seems to be very popular among the PJ residents. Agree with you as kopi and yau char kuai is the best.

catalyst - hope you get to try this soon!

sc - must give them a try. I'm sure I ate there before just can't really remember their taste.

i'm drooling over some now as my colleagues would drive over just to tar pau some for tea but not anymore since we've shifted further :(

babe - good rite? I love how light they are!

Heh. What a coincidence. Nisa and I had yau char kwai and ham chim peng to go with our otherwise mundane dinner last night. Our was a tad oily though. :(

Hi boo_licious, this yau char kwai stall sells the best in town IMHO. Have been patronizing the place for years now.

Unfortunately, it is sometimes not open seemingly when you crave for it so now I have the owner's mobile number. Saves me the trouble of braving busy Bukit Bintang traffic only to be disappointed.

kscheah - wow! If I can't find them I know who to call! Didn't know they're not too regular as all I got from my conversation with the lady was she is from Cheras. She thought I was a tourist since I snapped pixs.

Long time nit eat this. I went there many time now but couldn't find that stall anymore.. Myb uncle move to new place. Anyone know? Any number to contact ...