A few weeks back when I kept dissapearing down south, it was mainly to attend two cupcake courses at Shermay's Cooking School. Run by the famous blogger, Joycelyn from Kuidaore, it was an honour to meet up with someone who creates such lovely and delectable masterpieces. 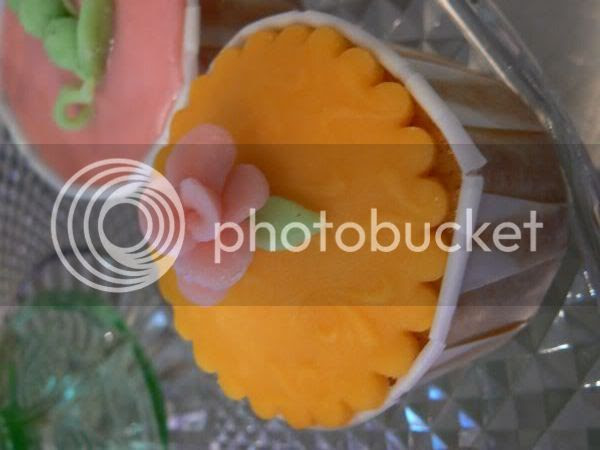 We had a lot of fun in Cupcake Workshop I as it was a basic course introducing us two standard cupcake recipes and how to decorate them. I especially liked the easy peasy way of making the chocolate cupcakes which uses the elusive Valrhona cocoa powder. That cocoa powder is extremely elusive as it's no where to be found in Malaysia hence I stocked up when I was in Singapore. Decorating cupcakes was not so easy and believe me I definitely need a lot more practice if I plan to serve them to anyone. Joycelyn made piping buttercream rosettes, shaping chocolate putty and coloured marzipan so easy. I was all thumbs when it came to making my decorations. Another thing I liked about the class was learning how to make chocolate putty - it will definitely be tastier than marzipan which I find slightly too sweet for my liking. 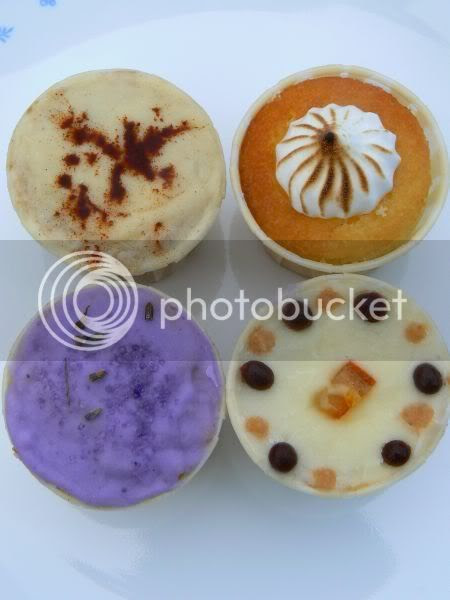 I absolutely loved Cupcake Workshop II. As it was more advanced, it was more adult like cupcakes which you could serve in a dinner party. The cupcakes were so rich and buttery that they came in tiny little paper cups to make it less sinful. Once infused with the different flavours, they were all fantastic. It was amazing how one master recipe could spin off these different flavours. We helped bake the different flavours and decorate them with the pre-determined frostings which was a variation of a master white chocolate frosting.
The picture above shows my cupcakes (from left to right, starting from the top row) - Chai Spice Cupcake with Vanilla Bean and White Chocolate Frosting, Lemon Meringue Cupcake, Lavender Cupcake with Lavender and White Chocolate Frosting and Earl Grey Tea Cupcake with Orange Blossom and White Chocolate Frosting. The Chai Spice Cupcake has cinnamon powder as a topping, the Lavender Cupcake has purple sanding sugar and lavender flowers as a topping while the Earl Grey Tea Cupcake has candied orange peel and Valrhona Crunchy Chocolate Pearls on top of it. My favourites were the Chai and Earl Grey Tea cupcakes that tasted so divine.
So if you're in Singapore for the weekend, do try and attend these classes as they are really good fun and informative. There's a long waitlist for the classes (something like sixty people) so book ahead. She's also running a Macaron and Biscotti class which sounds wonderful that I wish I could attend.
Other write ups on the classes:

The baking classes only available in Singapore? Sounds fun, wouldn't mind to join if they have it in PJ.

Do you have any feedback on the patisserie and cooking class by taylor's college? it's closer to my home but need to hear from horses' mouth before joining.

Sounds like fun. I would love to go for classes like this...but Spore is too far away for me.

What is chocolate putty? Sounds interesting! Oh, and do you know where we can get those white cupcake cups? I've only seen the regular cupcake liners.

I wish I can find some Valrhona cocoa powder in Perth too. Not sure whether we have it here or not. Perth sometimes can be more ulu than KL. hehehehehe

talking abt valrhona chocolate powder, i bought a packet of "natural chocolate powder" from our local bake shop. but err...whatsit used for? i havent seen any recipes that need it. is it the same as cocoa? cant be right.

precious pea - ya lor but then baking classes here are different. Think the one in Section 14 had a cupcake class recently.

diary of kay el - feedback from people who went, they said nothing great. I met this lady from Brunei who travels quite a bit to Msia for these courses and she said it's mainly sponge cakes and etc. Perfect if you like say Secret Recipe cakes.

bee nee - I know! So am I as I prefered putting the icing on with a spoon versus piping.

lemongrass - can always try a class in KL.

kat - choc putty is basically hardened chocolate but you can shape it like marzipan. white cupcake papers can be bought at Chang Tung in Taman Megah.

wmw - yes, didn't realise it was until I saw Lemongrass's blog.

flower - wow, didn't know Perth is backward but maybe they bring it in, just have to look for it.

fatboybakes - no idea abt natural choc powder. Maybe it's powder to make hot chocolate? Guess the only way is to bake a cake with it?

babe - yes it was esp to meet her in person. She's pretty amazing and so detailed in her baking.

Hi Boo
Was curious whether you managed to find out at the Cupcake Workshop why after baking, the cupcakes shrink from the sides?
Thank you.

Chang Tung in Taman Megah.. will head on there this w/end.

Next time I must try to go for such session too to learn how to bake proper.

just to ask.. Chang Tung in Taman Megah is the row same as Fatty Crab right?

Girls culinary schools offer different types of cooking programs to their students like restaurant management, hospitality management, chef professionals, baking and pastry arts management and lots more. There are several culinary schools for girls in USA which offer online chef classes and online training programs for those students who are unable to attend the classes daily. Educated chef professionals recommend all online services of these academies. They teach their students the fundamental cooking and management skills that are essential for culinary arts.