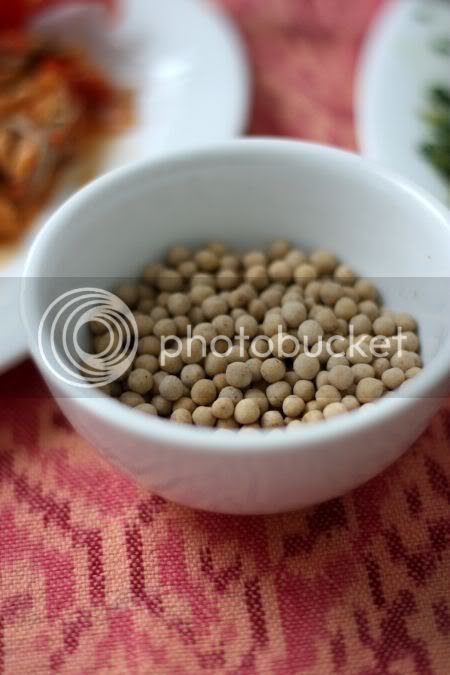 toasted sago pearls to go with the umai, to give it a crunchy texture

Dining at TTDI Plaza during the weekends for lunch is definitely a very quiet affair. Am really not sure how the dining places here survive as the place is literally empty. The only place that seems to be occupied by people is Frames (which serves pretty good Nasi Dagang). We spied this Sarawak home cooked food place when we dined at Frames hence we returned back to give it a try. 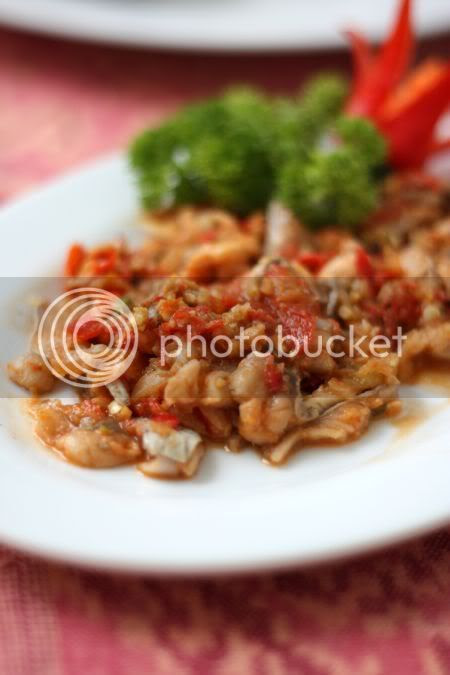 Sarawak-style ceviche - umai melanau (they also do a prawn version here)
To be honest, I was a little hesistant of eating the food here since I have no benchmark on the authenticity of the items served here. Weirdly enough, Sarawak is the only state I have not visited hence I am a dunce when it comes to Sarawak cuisine. However, since we were curious and needed a place to eat during the weekend, we ended up here. 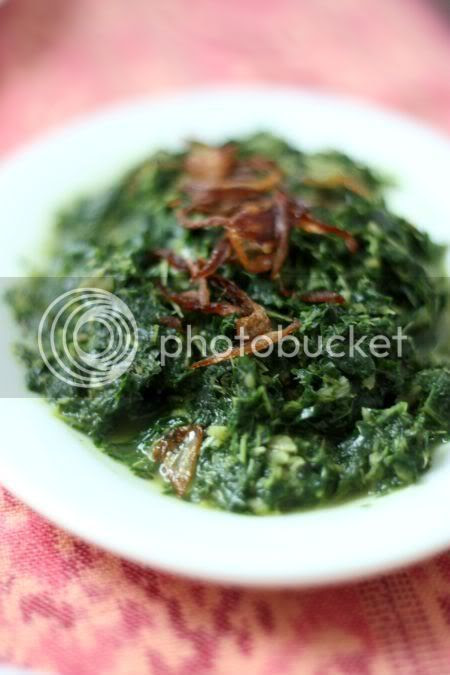 pounded pucuk ubi topped with fried onions
Even though they served familiar Sarawak stuff we see everywhere like Mee Kolok and Sarawak Laksa, I was curious to try the other stuff I have only seen or read in cookbooks before - umai and kacangma chicken. They also serve Terung Dayak, a different kind of aubergine here, which looks interesting. 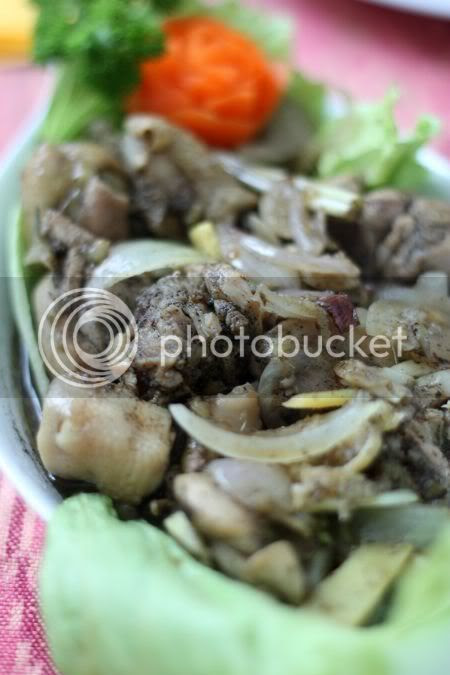 steamed chicken kacangma with a little too much onions
We enjoyed the pucuk ubi Bidayuh - sweet potato shoots pounded until tender and topped with fried onions. Reminds me a little of spinach since there is not much fibre in these vegetables. Not too spicy, this made a good start to the meal. If you rather have something spicy, the umai melanau is just right. Thinly sliced fish is tossed in pounded red chillies and lime juice. Similar to the Latin American ceviche, the citrus juices "cook" the fish slices when left out for the while. Toasted sago pearls are served with this dish, adding a nice crunch to the refreshing fish slices.
Last but not least, we had the steamed chicken kacangma, a kind of herb found in Sarawak. While the dish was quite tasty resembling something from mum's kitchen, I did think the use of the herbs was quite subtle. From what I read in another review of this place, this is definitely different from the versions found in Sarawak, as they usually add rice wine and ginger to this dish. Even the pucuk ubi Bidayuh is a little different here, as they use the wrong type of onions.
Even though, this may not be the most genuine of all Sarawak food, I felt it was good to try something new and different. However, be warned this place is not cheap. Even though food may look ordinary, I felt they overcharge for the food here especially since the plate of steamed chicken was filled with quite a lot of chopped onions versus meat. Does anyone else know where I can get to try all these Sarawak specialties in the Klang Valley? Would be great to try genuine versions over at this side of the ocean.
Restaurant Pucuk Ubi
A-1-13, TTDI Plaza
Jalan Wan Kadir 3
Taman Tun Dr Ismail
Kuala Lumpur
Tel No: 016-6046355
(Pork free.)
*Disclaimer: The opinions expressed here is entirely based on my personal tastebuds and may vary for others. This review is time sensitive; changes may occur to the place later on that can affect this opinion. The reviewer also declares that she has not received any monetary or non-monetary compensation from this place for writing the review.

Tagged with: Sarawak Food + Umai
Posted by boo_licious at 12:54 AM

i think i saw one.. same row as Sid's in TTDi.. but nd to verify..as i just zipped past the last time..

thenomadGourmand - oooh, that place seems to be a hotbed for new stuff..besides good old Muhibbah. Thxs for the tip.

Actually Sarawak has a lot to offer... been to Sibu and I had to say that there are quite a lot of stuff that you can't find here...
But things you might find in KL - Sarawak laksa (I don't really like the taste), Mee kanpua (product of Sibu)!
Speaking of nasi dagang on your first paragraph... have u tried Park Village @ Uptown?

haha guess i'm not the only one who have been to all states except sarawak. food looks different..

thule aka leo - ah, nasi dagang at Village Park is good. I love the mix of chewy grains with the soft grains of rice there. Yeah, I guess they were trying to lump all kinds of food here to cater for the mass public.

sc - I know, way beyond my knowledge of laksa and Foochow stuff, hence I had to try this.

brad - dunno, always worth a try since something new. Quite tasty but sadly not 100% authentic.

hehe, blogged about the same place too. :)

I regret that I did not try authentic Sarawak dishes when I was there a few years ago!

Yup, the place is overcharging their food and its not even authentic! I guess nothing changes from the time i visited the place last year till now. There's only one word to describe it - dissapointing.

the place's quite new..?went to ttdi plaza few times but never had the chance to try it out.thanks 4 mentioning the place to 'us'....
*pucuk ubi= tapioca leaf and about that kacang ma chicken minus the rice wine..?it's maybe because the rest. serve halal food only so u know...?

thanks for trying Sarawak food and blog about it, I felt honoured indeed. im familiar with the restaurant mentioned, and the owners.

actually there's no onion in kacangma.. it's consists mostly of ginger, a bit of shallot & garlic. the true kacangma cooking must have alcohol, so of course the version u had is not really authentic. in my opinion, I can cook much better than what you had there hehe..