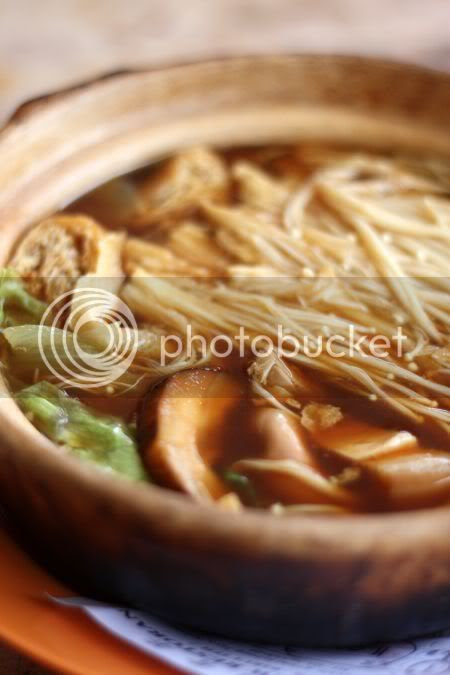 claypot goodness in a pot...a little sinful though

Let us counteract all that healthy food with a claypot full of sin a.k.a bak kut teh. I was craving for something soupy and filling since I had a very early dinner the night before. Original plan was Chao Zhao at SS18 but since it was closed, this was the next best thing.

You are spoiled for choice around this whole row of shophouses; there is Chuan Chiew, Yu Kee and further away Chao Zhao. All serve bak kut teh but Yu Kee and Chao Zhao has additional stuff. I seem to be fated to eat here as I got a carpark space next to the shop. Even though it may not be full when early, it starts to fill up as the clock strikes 1pm.

The taste of the bak kut teh is still not as superior as my all-time favourite Teluk Pulai at Taman Rashna but quite decent. It probably does not make the mark for me, as I prefer my soup to be a little herbal. I went a little overboard with the "additions", asking for enoki mushrooms and intestines. Each normal claypot comes with your choice of meat, canned button mushrooms slices, Chinese mushrooms slices, tofu puffs, beancurd skin and iceberg lettuce. Another plus point about eating here - the shophouses open both sides hence you can walk in from either the front or the back, making it much easier.

Tagged with: Malaysian Food + Bak Kut Teh
Other reviews:
Posted by boo_licious at 12:00 AM

hey..was wondering whether you have tried Ah Ping Bak Kut Teh? It's on the same row as those bak kut teh shops..blue signboard.
This one seems to have the most customers i think. i used to patronise ah ping and i think the bak kut teh there is good. but yeah, i guess none of them can beat the klang ones :)
oh yeah, i really enjoy reading your blog, all the pictures make me salivate and miss malaysia more! currently studying in the uk.
oh and i think we're facebook friends too :)

have a good week!

This seems to be a very famous one! I used to stay at SS14 and tried it once.. absolutely delicious!

so which was it.. sinfully good or

Janice, didn't see Ah Ping, must go look for it. That row has an abundance of BKT. Awww, I know that feeling abt missing Msian foods. Never mind, am sure you get to come back soon.

mycookinghut - yeah, this one is I think the longest BKT place. Has 2 shoplots also.

ciki - it was more like, goodness how sinful. I often find BKT a bit oily though, could be due to the fatty meat they use.

LOL Julian - I kinda agree with you. Nothing beats Teluk Pulai. Now, I feel like drinking some of that wonderful soup.

Hiya Allie, nice hearing from you and thxs for the nice compliment. Cheers me up this morning.

I don't know where you work.. but since u r in Subang area... perhaps you can venture further to Sri Setia.. there's a BKT restaurant somewhere behind Plaza Perabot LDP... called Ah Sang Bah Kut Teh.. normally it will finish by 2pm...
oppss.. maybe you had gone there already! lol!

that is so nice of you leo to recommend BKT places. Yes, ate at that place before also but sadly it is too far away for me.

I was just about to suggest Ah Ping too and saw Janice suggesting the same. Maybe you can drop by the next time. Happy CNY :)

hi.. i think Chuan Chiew is is good! I've been eating there for the last 7 years to the very least. Everyone there is friendly and in fact, i usually give them a call to pre order whenever i Tapau! :P My two cents :P