Went to Tenji, last night to scout around since we dined at Providore (fingerlicking hickory smoked pork ribs) round the corner. The place was quite enormous and surprisingly even packed at night. They have started a new promotion per the pictures below, so do book ahead. Saw a few walk-ins doing their booking and from what I gather, spaces are already filling up fast. Weekends seem to be very popular (this weekend it is fully booked for lunch and dinner). 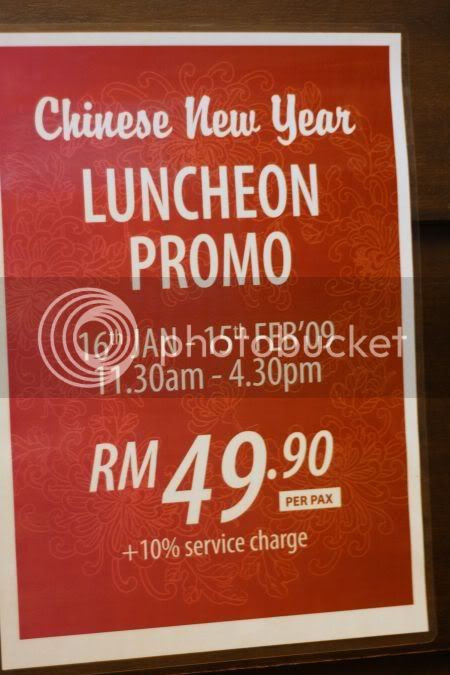 Loads of controversy about Tenji started yesterday as an article emerged in the NST Streets Section that used Precious Pea's pictures i.e. the sushi and crab without her permission. Tsk! Tsk! 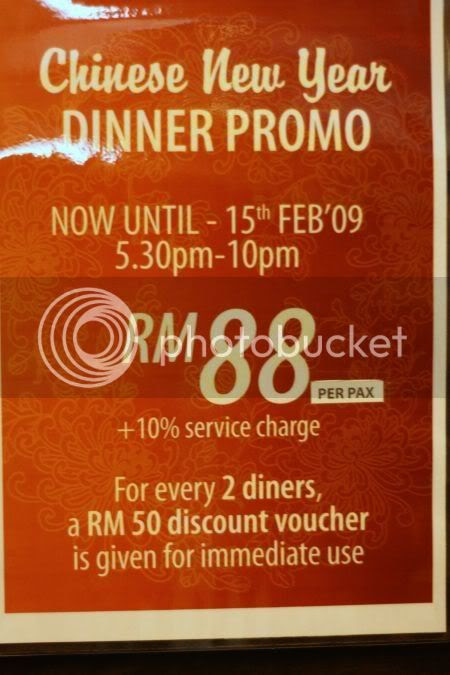 Rumour has it, the people behind it used to run Jogoya. Sounds very possible especially since the person interviewed in the article is quoted as saying he, "received training in running buffet restaurants in Taiwan" (Jogoya is based in Taiwan).
During the tour, I did ask the person taking us around, are there any special days they bring in their fresh seafood. Seems they cart in all the seafood by specially ordered container as they import the items themselves. I guess that is how they keep the prices down by ordering by bulk. However, for salmon they still get them on Tuesday and Fridays like the other Japanese restaurants in town.
Plans are also on the way to add Japanese hawker stalls at the terrace area in the near future.
Updated 19 January, 2009: Seems they now employ SMS to do bookings as they can't handle the volume of the calls. I got this from the solaris montkiara website, you can SMS these numbers: 016-9209007 & 016-9209008. Don't call them as it seems they won't reply. Hope that helps you all as I did see one reader desperately trying to call them. Suggest you ask them in the SMS to confirm receipt of the message before you proceed to go, if those dates are unavailable.
Posted by boo_licious at 11:27 AM

Wow, they used her pictures without her permission? Can she sue them for that?

Or at least ask them to put a link to her site from their article?

49.90 is still a bit pricey for lunch. For Japanese buffet, I've always believed that if you are willing to pay RM78 - RM88 per person, you might as well go and eat Japanese fine dining in a big group.

That way you can tell the chef, my budget is RM88+ per person. You'd have fresh and authentic (not mass made) Jap food. And you'd be full to the brim as well.

Me and my friends did that at Fukuya (RM100 each), which I posted about... much more worth it.

there was a fast and efficient community service reminder..yes it does sound suspiciously like jogoya esp with the way the buffet is runned..

ooh, thanks for the update. difficult to call in though.. looks like have to book in person.

Feedmelah - they didn't reply her but I thought that was quite bad of them. Fukuya is very good, esp the value for money kaiseki lunch set - good quality stuff and excellent service. Too bad, they had to shut their Bsar outlet.

Jasmine - yeah, thot I better let you all know, since we visited the place last nite.

so have you booked any???

Still no reply from them to date. Guess they won't reply. Anyway..thanks for highlighting this too on your blog.

POOR PEA! Pea.. we feel for YOU! I for one am not blogging Tenji. They hv enough publicity la I tell u.

Boo... no wonder la.. it's got like JOGOYA written all over it!

The RM88 is a better deal, for 2 with the voucher for immediate use. Now the catch, can it offset the RM176? When the brouhaha dies down will there be another joint that will up the ante to compete.

how can they simply take precious pea's photos without any permission or attached web link?! iksss

Julian - I reckon best to avoid until the hoohah dies down?

thule - nope, kinda torn between curiousity and good sense, since a lot of people will also be flocking there.

precious pea - I guess they will ignore it.

cumi&ciki - Yeah, Msia boleh - we can recreate anything here.

worldwindows - I guess with those prices, they actually make monies and hopefully won't turn genuine customers away.

ai wei - I don't think they knew since they may have taken it from the email but guess they didn't check further and now when highlighted, they are ignoring it.

They seem to have barred my phone numbers I am redirected to voice mail....

Angie - they are overwhelmed by the responses! Reckon better you visit them or else very difficult to get a booking.

Angie, for you the SMS phone nos in the above post. Hope that helps you book a place.

Hmmm... somehow, I feel that the Japanese buffet is overrated.. as if the food are really that worth it.

For those who has not been to Tenji, the official word is, at least from me, avoid it.

I hate to see new business not able to survive and sustain the initial momentum. Tenji's management, if you are reading this, please take note:

1. Hot. The restaurant was full but not pack to the brim, but temperature inside the restaurant was about the same as outdoor seating minus the breeze. You can tell they are aware of it as there were portable air cooler all over the restaurant. Very uncomfortable.
2. Extremely bad service. Not once our table was bussed. We piled the plated stories high but every servers that stopped by who brought our food did not bother to clear our table. We moved our plates to the empty table to our next, when they seat the next table, they just push them to one end and sat the new table down. Not till the new guests asked them several times, they were not cleared away and not completely, but just partially.
3. I booked the table 2 weeks ago and specifically asked for a table far away from cooking station so we don't have to endure the smoke, the server sat us right in front of Teppanyaki station! But they did moved us.
4. Ugly space and death traps everywhere. The walk way to the main dining hall were layered with stone slaps and pebbles... it is so hard to walk on. What's up with the baby steps at the elevated area? One of those almost everyone misstep and almost fell over?
5. Talk about ugly, what's up that fake carpet on the outdoor area? The lawn look-alike carpet. I am sure bits of food just got trapped in there. Who is your contractor and designer anyway? What a stupid idea. Oh, did I mention ugly?
6. Here comes the fatal flaw. FOOD WAS BAD! I was at Joyoga when they first opened, if I were to give them a 8 back then, Tenji deserve a 3. Selection was limited, you can hardly find anything that worth the RM88+ you paid. Those made to order food serving was so small I thought they were meant for gerbils! When you order a side of grill Unagi, you get a piece (Yes, ONE piece) that is about the size of those you find on sushi. The 1.5cmX3cm piece.

I took all my managers and supervisors out to a special dinner once a year right before CNY every year. This is one that I was totally embarrassed by.

I really hate to see one's investment go down the drain. Please look into these or you just get ready to pack your bag.

Oh by the way, just want to echo many of you on the calling part. I called 3 times to get someone for reservations. But it took my staffs 20 calls to get through the reconfirm the booking.

Jason - looks like you are right esp after I read wanderlust's comments.

Thxs for the feedback wanderlust, sounds very bad. Yeah, that path is very dangerous. I can imagine stilettos getting stuck there and babies falling down. They seem to know as I remember that guy telling me they were planning to change it. Yikes, food is bad - seems to be the backlash now as they can't cope.