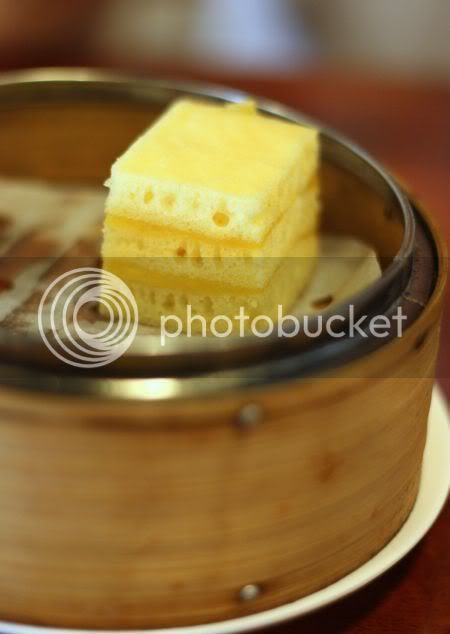 a little weird to start off with dessert but this is the best ever steamed layer cake aka ma lai koh (RM4.20)

I get excited when I find good food to share with all of you, hence I thought I'll spend my whole afternoon editing and uploading pictures to Flickr and Photobucket. It is also a promise to poor Precious Pea (who is down with very bad tonsilitis) since she is craving for the steamed layer cake a.k.a. ma lai koh, I discovered today. 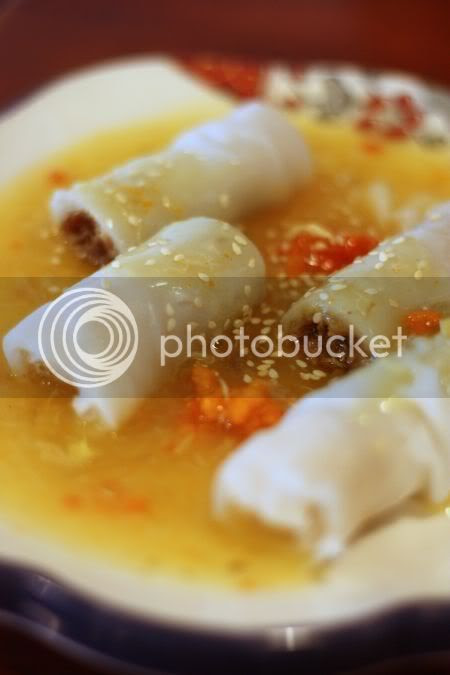 It was pure coincidence we stumbled on this place, as our original intention was to dine at One Noodle but my mother decided to give it a try. She actually thought it was part of the Dragon-I group since she spotted the Chinese characters instead. When we approached the place, I noticed that it said Chef Loong outside and inside, I even recognised one of the waitress to be from JW Marriott Hotel's Shanghai restaurant. 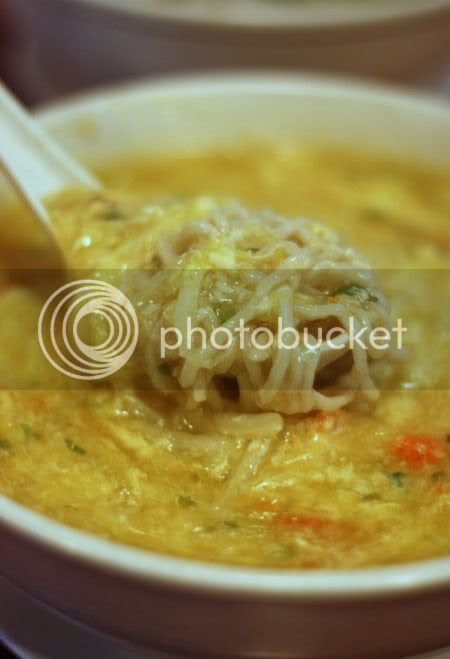 For those who love xiao loong bao (those steamed Shanghainese buns fillled with stock and melt in the mouth meat), you will be familiar with Chef Loong's name. Originally, he started out at JW Marriott Hotel's Shanghai restaurant, learning from the Hong Kong chef how to made dim sum. Then later he struck out on his own and opened Chef Loong in SS2 (nearer to the police station). Later he got wooed away by another food and beverage group who opened Shanghai 10 in Bangsar, Sungai Wang Plaza and Avenue K. Last year, they abruptly closed the Bangsar place. Am not sure if the Sungai Wang Plaza place is still there but I did hear Avenue K is doing business still. Seems he opened this place about 6 months ago.

Interestingly enough, his signature dish of steamed xiao loong bao (3 for RM6) don't make the mark here. While you can't fault them for its melt in the mouth texture, I felt the soup was a little bland and the folds just a wee bit thicker than I remember it. Maybe the apprentice in the kitchen hasn't mastered the intricate folding techniques so well here. However, what stands out is the fantastically light and delicate steamed layer cake (RM4.20). With a spongy texture, this was perfect since it wasn't too cloyingly sweet. Really good stuff, which I wanted to continue eating again and again.

On their menu, they have some new items besides Chef Loong's signature dishes such as deep fried spring roll with unagi and yoghurt, pretty lady buns, baked prawn dumpling with cheese and the one I picked - steamed rice flour roll with duck meat in crab meat sauce (RM6.80). No regrets ordering that dish. Smooth thin rice flour sheets wrap a crispy roll stuffed with roast duck meat - delish stuff and slathered with a sauce with bits of crab roe. Only dissapointment was the crab roe was a little hard but I forgave them since I absolutely loved the duck rolls. They are a little thin too but I reckon that is why it tastes nicer.

Using a similar crab sauce, it is also served with lai mian (RM8.80 for the noodles). Resembling lor meen or shark fin's soup with bits of crab meat and crab roe, the noodles were nice especially eaten with a dash of black vinegar. However, not everything is fantastic here, so choose carefully or you get duds here. I didn't quite like the wor tip (pan fried meat dumplings for RM4.60), as it was not pan fried enough and it was filled with shredded carrots. Would have prefered it with chives instead. However, it was very good value for money since the dumplings were stuffed to the brim. The prawn wantans served with the lai mian (RM7.20) were also good value - filled with one big prawn but lacked the crunchy taste I prefer.

What I also really liked were the prices - very reasonable for the amount of food we ate. I expected a bill of more than RM50 but was surprised, my total bill with 2 glasses of hot chinese tea came up to RM39.60. Since they just started out, no service tax levied here for our items too. I reckon I will return again to try the other stuff but parking around here will definitely be a big problem especially since they have Murni's nearby. For those who have a sweet tooth, they also serve durian pancake (I remember my friend loves this) and that avocado kataifi pastry, Chef Loong and Shanghai 10 was also famous for. For more pictures on what else we ate, see my Flickr set. Sorry for the yellowness in the pictures, just realised all 3 pictures I selected are already yellow in colour.

(Non Halal. Located between Murni's and Public Bank Berhad. Closed on Mondays. Open from 12 noon to 10.30pm. On Sundays and public holidays, they open at 10am )

ahh, looks nice, I shall check it out soon since I stay so close by. :D

wahh the prices for such good food.. i think i know where to get my dim sum fix alreiii... heheh

thenomadGourmand - go try the other stuff and let me know what else is good. Couldn't really try much since only 2 of us today for lunchie.

Thanks Boo!!! The golden ma lai koh looks exactly like what it used to be back at the Chef Loong tong sui po. I do believe that a few doses of it would cure my tonsilitis overnight! Slurps!!

What a great spread, and such curiously good prices? Better hotfoot it over there and have that steamed duck rice roll before they decide to hike up the prices!

550ml - aiks, I hope they don't increase prices. Sorry to hear abt yr less than stellar experience in Fong Lye.

Yup it had been there since quite sometime. For me Chef Loong is still one of the best for shanghai dim sum. I used to always go there coz their foods is nice and the price is reasonable. Even my mother also said is cheap.

Cool stuff Adrian. Am glad I found this place as I really do like the food and prices here.

gong xi gong xi!!! lol... hope you had a prosperous year... I sure had! won quite a lot of $$$ on mahjong with my relatives.. quite ONG this year I can say.
Anyway, Jenn (my wife) loves dim sum and so will drive there one day... thanks for the info

Leo - wow, that sounds very ONG of you. I played cards too but didn't win much. Hope your wife likes this place as much as I do.

ciki - this one passes my mum's approval so must be yummy stuff.