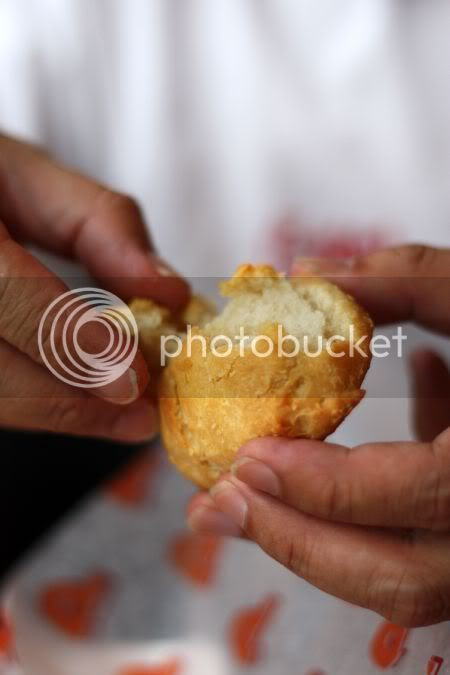 scrummy stuff aka fluffy biscuit, eat this first when hot

Happy Niu Year everyone! Hope the time off was a good rest for everyone. During the long break, we had an opportunity to check out the latest fast food joint in town a.k.a. Popeyes. I vaguely remember a Popeyes in Kuala Lumpur long ago but I guess it didn't survive against KFC. (watch out for the audio on their KFC song to the tune of Petula Clark's Downtown!) Seems ironic that their first outlet faces off KFC again (KFC is across them). I reckon, this is bold face challenge to KFC to rev up the battle of fried chicken brands again. 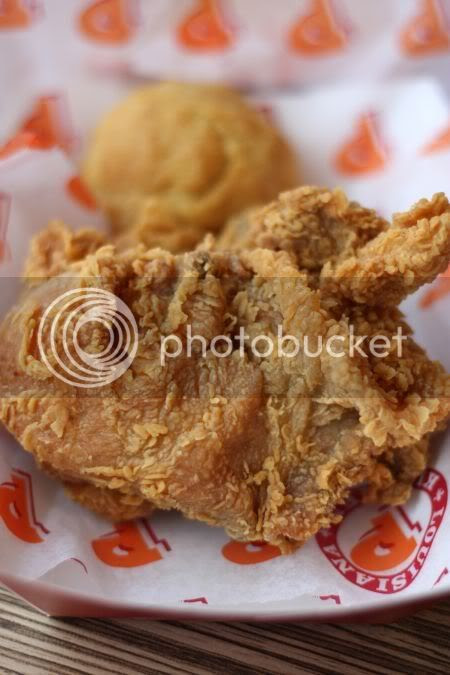 In terms of offerings, Popeyes has a slightly varied menu - fried chicken (2 kinds - mild & spicy), fried fish and fried shrimp (KFC only has fish and chicken). They also offer different sides like biscuits, mashed potatoes (differentiated with KFC, as it is covered with a slightly spicy sauce with minced meat), coleslaw and fries. For those who can't do without their daily intake of rice, don't despair as Popeyes also does rice bowls topped with fried chicken, shrimp or fish slathered with a brown sauce. Last but not least, they have sandwiches (with fried chicken, shrimp and fish) and desserts in the form of cheesecakes and cakes. 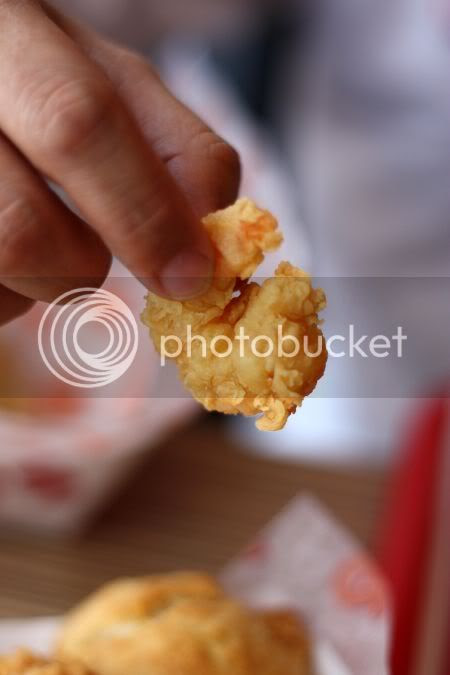 If we had to do a head to head comparison with KFC - the best is to compare the 2 fried chicken set from Popeyes with KFC's snack plate. First, the fried chicken. In terms of size, it is comparable with KFC. If you had to compare it with the KFC Original Recipe (OR), KFC definitely loses out since the OR seems to be a little soggy (from all that oil under its skin) and I suspect from the pressure cooker method. It can go head to head with the KFC Hot & Spicy version but I feel Popeyes has marginally less oil. In terms of spiciness, Popeyes loses its ground here, something they should address quickly since Malaysians can take on more heat compared to the Americans. For the taste of the meat, I would say it is nothing fantastic since it is definitely not free range chicken. 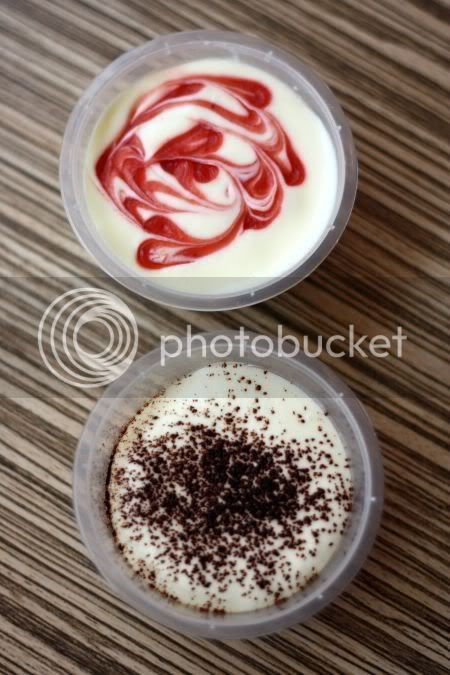 desserts for the sweet tooth (about RM3)

The upper hand Popeyes against KFC are their sides especially their secret weapon - the fluffy and scrumptious biscuit. While it is typical in America, we don't get much of this here. Similar to scones, they are the reason I'll definitely return to Popeyes again and again. I also like their smooth mash potatoes with the slightly spicy brown sauce with flecks of green chillies and minced meat. Even the coleslaw tastes like coleslaw versus the pale green gunk they throw at you in KFC. While KFC does not give you biscuit, instead it is a butter bun. To be honest, I never liked that bun and would usually leave it at the side.

Pricewise, since Popeyes just started they don't charge 5% service tax unlike KFC. Considering KFC has economies of scale with more than 390 restaurants nationwide, the snack plate is about 20 sens cheaper even with tax. [RM9.90 net in Popeyes versus (RM7.55 snack plate +RM1.70 drink) x 5% service tax in KFC]

What about your health since we know eating too much fried chicken is bad for us? Based on Popeyes nutrition charts - the fat content in piece of mild chicken thigh is 20g while the KFC Original Recipe is 22g. For the spicy Popeye chicken thigh, the fat content is 24g vs KFC's Hot & Spicy of 27g. (data is from the KFC Malaysia's website under nutritional values) Hmmm, Popeyes is a marginally healthier choice, it seems.

While all these bodes well for Popeyes, I won't say it is smooth sailing for them as they still need to improve on service and delivery of the food. We noticed the food is kinda lukewarm when it gets to us. Even though the fish and shrimp was fresh, it didn't taste fantastic as the batter was a little soggy probably because it was out there for quite some time. It also could be because these items are not so popular as the fried chicken didn't suffer the same fate. One thing they got it right is the biscuit - damn good stuff, so eat it straight away before it gets cold. We also got to try a bit of dessert - a little misleading since cheesecake is actually cheese covered sponge and tiramisu resembles more like a chocolate sponge cake with cream.

Sorry for the analytical post but I thought I should take a different way to analyse the two brands. Heck, what do I know as at the end of the day, it boils down to one thing - taste. So just go and try it yourself. You may love it or hate it, but at least now, we have a place to get fluffy biscuits. For more pictures, see my Flickr set.

(Halal. Outlet is at the old Shakeys and the same row as Yong Len Restaurant, Sri Paandi and Jaipur. There are 2 levels; choose to sit at the air-conditioned part or the terrace where you can smoke and spy on KFC.)

These look wonderful can't wait to try Thanks for sharing.

Any alternative to KFC is a rollickin' good feed to me! I've given years of my fried chicken quota to KFC, grudgingly! Am off to Popeyes soon I'm back in KL from CNY!

I think that's why Popeyes didn't survive the first time; the size is about the same as KFC. Here and even at Singapore's Changi airport, the pieces are huge, especially the breasts. The turnover is normally faster as well so it's fresher. In Manhattan right now, they're having alot of promotions so it works out to be as cheap as 1usd a piece.
p.s: Happy Chinese New Year!

Will definitely go try it.

good tat we r havin more choices of fast fd - w Carls Jr, Wendy against McDs, Popeyes to KFC and Papa Johns, California PIzza against Pizza Hut. felt tat the market has been monopolised by those fast fd chains who has been churning out sub-par food for us far too long!

I shall hunt this down! Chicken with biscuits in Malaysia.

Looks a lot like scones though, in the first photo.

i love popeye's in US, especially their spicy chicken ... and you are right that popeye's chicken doesn't seem as oily as KFC ...

yes, their biscuit is to die for, as well as their mash potatoes cajun style.

i hope what i can get in US here is the same as in Malaysia though ...

may this company lasts in malaysia ...

Hope you enjoy it Netts Nook.

550ml jar of faith - yes, any alternative to that stronghold in fast food chook is definitely welcomed. I wish Popeyes well as I do want alternatives to KFC.

j2kfm - guess it is not as fantastic compared to Poh Lee at Pasir Pinji but it is pretty decent for fast food.

D - Usually if they expand fast, they can make monies. Boils down to economies of scale.

Ben - that is so sinfully good. I can imagine biting into it and all the fats oozing out. Aiks!

thenomadGourmand - you're rite, there seems to be an influx of more brands and choices for all of us. Hope the newbies can survive though.

Huai Bin - it is kinda like a scone, just that they don't give you jam and you eat it with chicken or like me - dipped in the mash potatoes with the sauce. Hope you enjoy it.

Greenapple - so many choices in US. I was overwhelmed when I was in the Midwest last year but sadly I can understd why US is a fast food nation, outside food is quite limited in choices.

There was a Popeye in Sega Land in Sunway Pyramid 10 years ago.

Simon - yes you are so rite, my friend just reminded me as she used to manage the Sega Land, many moons ago. Thxs for the info.

I went to try it on the second day of opening. Unfortunately, I agree wholeheartedly that their service is questionable. I would expect them to hijack some KFC staff. ^_^ As for the food, the spicy chicken is not spicy at all, we had to double check with the staff if they got our order correct. Portion wise, I miss the good ol days of Changi Airport Popeyes. Large portions enough to actually keep me full for 6 hours. As for tenderness, one of the things I noted in Changi Airport Popeyes was how tender and juicy the chicken breasts were, its almost similar here, only slightly drier. I do want them to improve but I didn't see feedback boxes.