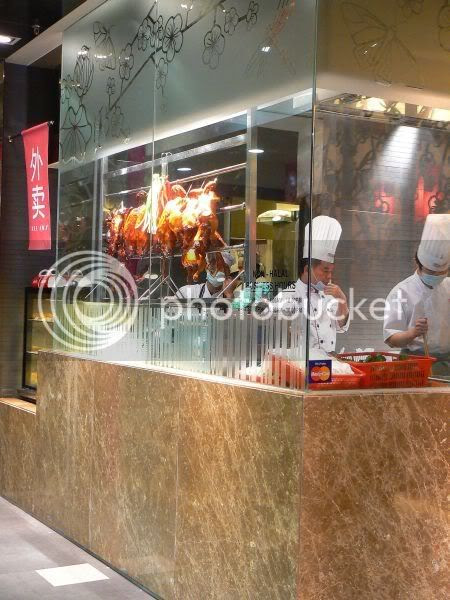 Along the Promenade, which connnects the old wing to the new wing of 1 Utama Shopping Centre, a number of new eating places have opened - Pasta Zanmai, Carl's Jr, a vegetarian restaurant and Canton-I. 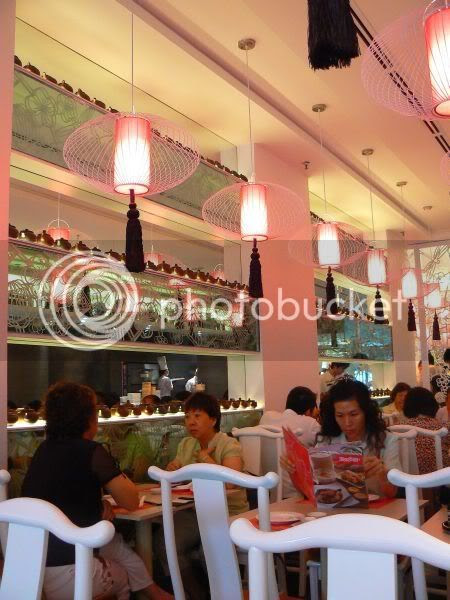 Canton-I is supposedly owned by the highly popular Dragon-I and opened in December 2007. A different menu is served here - noodles, rice, congee, dim sum items (fried, pan fried and steamed) and desserts. Similar to Dragon-I outlets, part of the frontage of the restaurant is the open kitchen. Here at Canton-I, you get to see the barbequed meats and the chefs cooking noodles. A small take away area for pastries is tucked at the side. 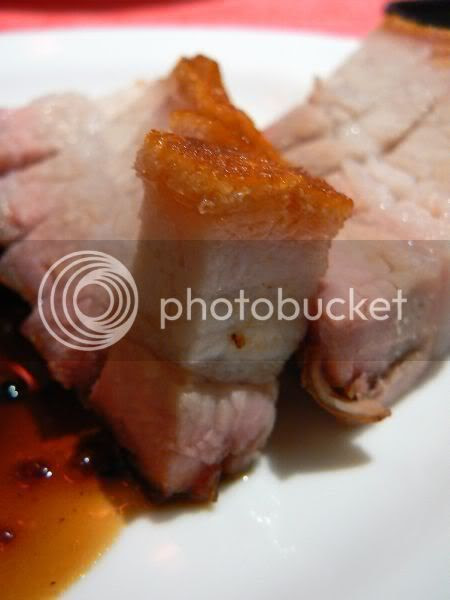 I like the way the place is decorated - bold splashes of red in the form of lights in cages with cherry blossom motifs everywhere. The lights remind me a bit of Delicious except they are a different colour and have tassels. Tables and chairs are all white. All along one side of the restaurant is their open kitchen. You can see the chefs cook the noodles, chop the barbequed meats, make chee cheong fun and spoon out the congee. At one side of the restaurant, it is mirrored and has rows of clay teapots as decorations. 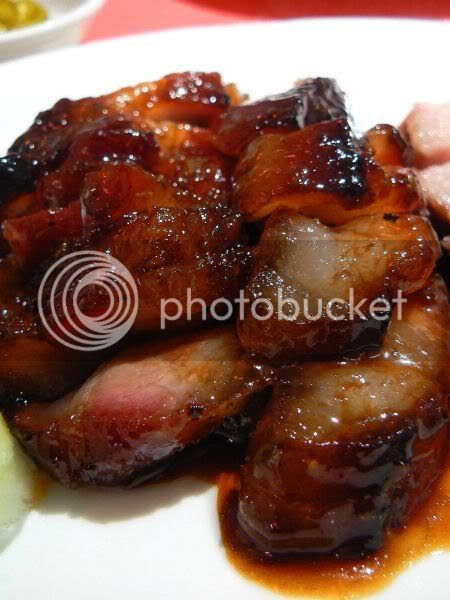 However, space is definitely a problem here - hence they put the mirrors to try and make it look bigger. I didn't like how they arrange the table and chairs in the middle and in one row. Makes it so difficult to get in to the tables at the end. I suspect kitchen space is also limited as I spied a chef making wantan and sitting on high stools, which face the open kitchen. 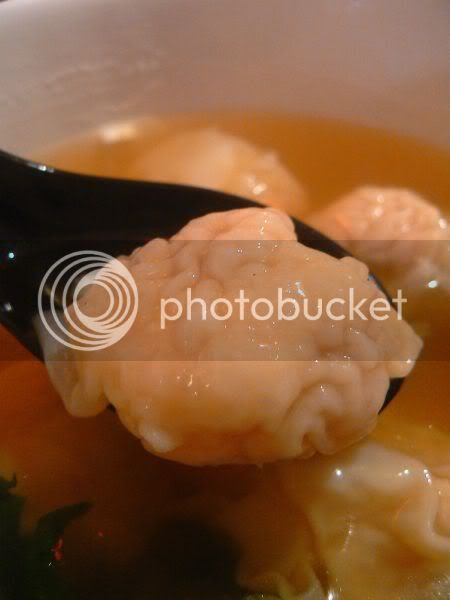 On to food, we ordered the highly recommended char siu and roast pork - a mixed combo for RM22.80++. The char siu was tender. However, I found it was a bit sweet as they had drizzled the sauce all over it. It was also quite full of fats. The roast pork was served with mustard and a bit of caster sugar. You're suppose to dip the roast pork slices with the spicy mustard and the sugar. I loved the crispy skin but felt the roast pork was a bit too high and full of meat. 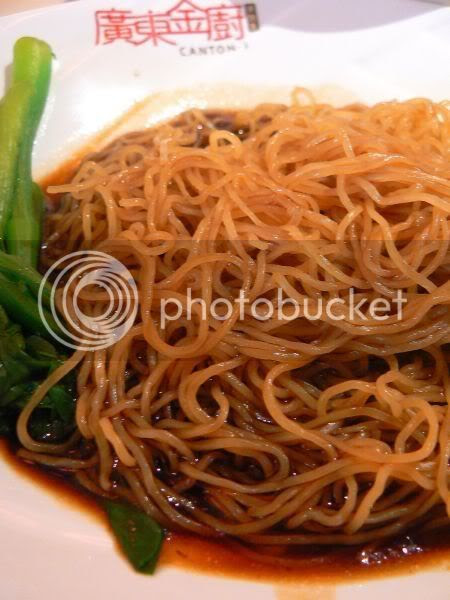 My favourite part was their wantan noodles. RM3 for the plain version and served dry, the noodles was springy and a nice bite to it. We loved it so much, we had seconds of the yummy stuff. Only complaint was they added too much sauce in the first bowl but in the second serving, the sauce was just nice. 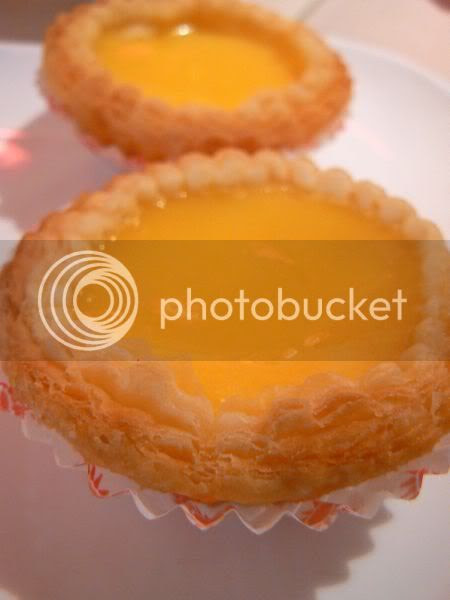 We also ordered a bowl of shrimp wantan (RM10.80++) to share. Unlike wantans in the stalls, these were big ones chock full of shrimp and minced meat. In their menu, Canton-I claims wantans were known as "clouds" among the Chinese. Said to be tiny and can be gulped in one go (hence the name - wan tan, i.e. one mouthful), these were the opposite of what was described. I quite liked the wantans as it had lots of ingredients inside it. 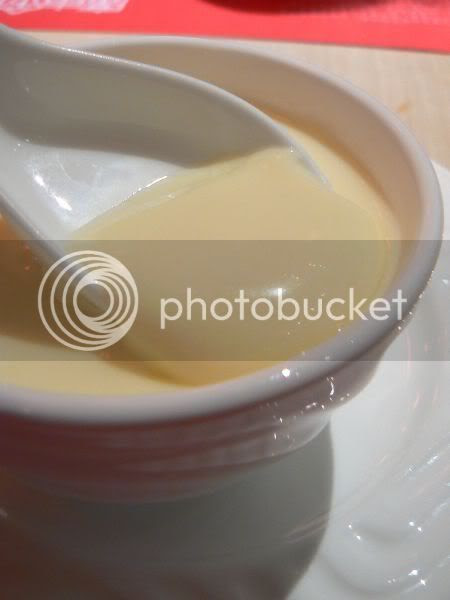 Last but not least, we had desserts. Saw a lot of people ordering the egg tarts (RM3++) hence I ordered a portion. Served in a heart shape plate, I liked the flaky pastry and smooth egg custard. Also spied the popular Hong Kong dessert - double boiled milk with ginger. Smooth like tau foo fah ( soy beancurd), ginger juice is added to hot milk to allow it to curdle. It was nice but a bit too watery.

Overall, I quite liked the food especially the noodles. Saw braised beef noodles, so that will be my next try. Also saw interesting congee with crabs. In the dim sum section, they have cute piggy steamed buns and buns with flowing custard. Even their char siu sou is shaped differently here - in a form like an abalone. If you prefer, you can also pack these items back. Do note items here are not cheap though and they charge you RM1 for a glass of plain water, which is refillable. Don't take their Hong Kong milk tea as it tastes horrible.

your photography skills made the already yummy food look even more delicious!! I cant wait to try it next time I visit KL! I go to 1-Utama almost every other day when I am in KL cuz my parents live near there. I dont remember seeing that restaurant there last time, in 2006. At that corridor you mentioned, I only remember a dim sum restaurant restaurant that has 50% off during the daytime.

hazza - this one is near the Burger King/Sun Moulin/TGIF area. Hope u enjoy yourself.

sounds like a good place to be when you are at this mall.

ahuh! now i know why it's called wanton...thanks! but the kiasu me will still demand for the biggest ones..haha!

I would like to eat everything you have photographed! It looks really good! One day I will have to visit your beautiful country and try some of these places you dine at.

hehe...i gonna try it out one day!

the roast pork with mustard and sugar?? omg wonderful..

double boiled milk with ginger looks good... too bad it is watery =.="

will give this place a try :)
the wantan noodles definitely looks springy :) and.. gotta have those egg tarts! ;P

yay another new place to try out!

whenever i passes by, its always looked so full and stuffy hence i gave up and hop next door, or few doors away. but must go try during weekday soon. thanks for sharing.

I am wondering how they make their common Wantan Noodles different from others. They must have their own recipe since they are a big restaurant.

Will give it a try to find it out.

dang! too bad i was busy for the past few days..if i read this earlier, i would have known where to makan when i was at One U yesterday!

the ginger milk caught my eye. i love most things ginger. :)

BBO - it gets very packed during peak times though.

Lannae - come home and we will take u aroudn.

Jackson - glad u liked everything including the egg tarts!

Joe - hahaha, u better make a trip specially for this.

Ling239 - yes, looking for a good one but this one kinda failed after a few scoops.

Imbi and Itchy - yes, always packed and I hate how they arrange their tables and chairs!

wenching and esiong - yes, usually they have their own recipes

beachlover - hope u get a chance to try the food out.

rokh - hee hee, it also caught my eye hence I ordered it. Very rare to get in KL.

the food here looks really nice.... canton-I, sounds like a good place to try out ... thanks..

rm3 is cheap for the wan tan mee..same price as the egg tart? will try the noodles ...pass by this place many times but just didn't want to try yet.

irrestible - it tasted so yucks! Waste of monies.

teckiee - plain noodles only, as we shared the huge platter of roasted meats. The seating arrangement is a bit weird though.

Glad u like the renovation works too...we had many sleepless nite completing it

I visited this spot yesterday and was hit hard in the pocket and throat (too much MSG). I tried the roast duck noodles which was ok but felt that the pan-fried lobak was a bit tasteless.

I tried the HK "ying-yong" which had too much milk, without the taste of either ying or yong. Should have stuck with chinese tea. :-P

Yes, the chef wrapping the wan tan was sitting at the counter. ;-)

However, got to admit that the roast pork looks good, although I didn't try it.

Have to say that this place offers something completely different from Dragon-i... ;-)

Deeeeeeeelicious, and worthy of the morning after the Undi Results :-)

Hong’s Stuff said...
This comment has been removed by the author.
2:05 PM

I have a bad experience there and I wouldn't think I will be there again.

I am also had a bad experience..They are playing a treat. They are only give 20% discount to CIMB cash rebate card holder but not telling the truth when I visited. The food there so so only..not really worth for value. I will not visit there again.

Terrible and unprofessional service for their Prosperity Abalone Treasure Pot 2013 CNY Promotion - more than 45 minutes wait for a below par meal that was preordered and prepaid! Ingredients low grade and broth "thin" and watered down! Shows how much integrity Canton-i has for their food the served !!!