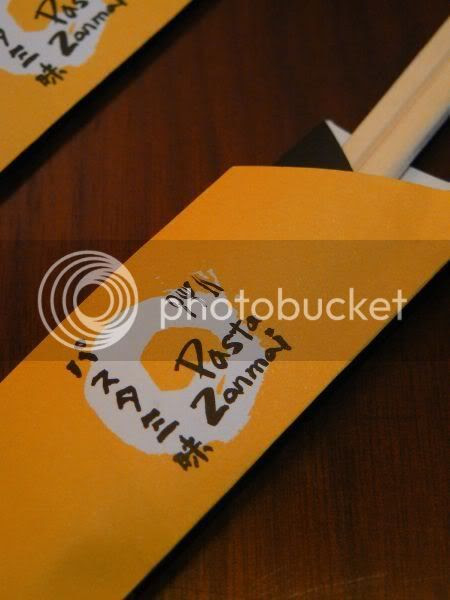 Regular readers of my blog should know I am a great fan of the Rakuzen group of restaurants and Japanese food. Hence, when I heard about their latest venture at 1 Utama Shopping Centre, I knew it would be where I'll be dining on my day off. Instead of sushi, this time round, the place serves pasta, hence the name Pasta Zanmai. 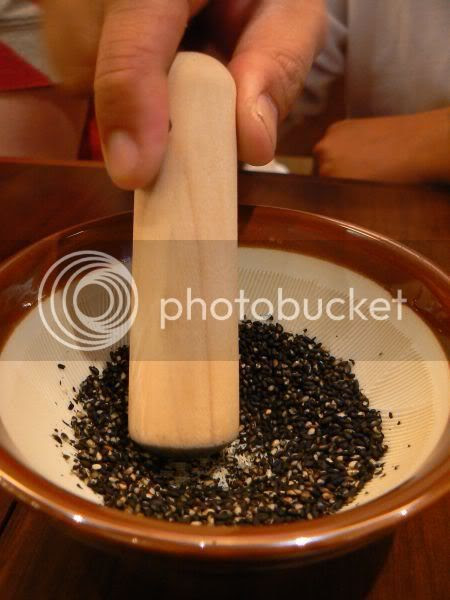 Grind your own black sesame seed

Right opposite Sun Moulin Bakery and next to Carl's Jr on the Promenade side, which connects the old and new wings together, it can be hard to spot this place as it is hidden behind Shojikiya's Japanese foodstuff. The place is quite small with tables and chairs on the side and smaller booths in the middle. The open kitchen is at the back, allowing you to observe the chefs cooking your pasta. 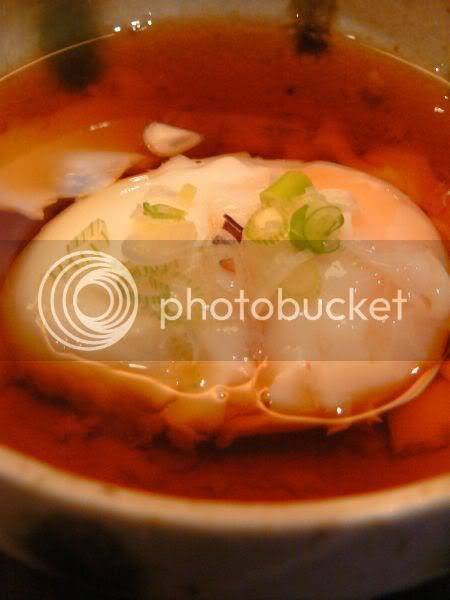 Onsen Tamago (RM3++)
I had met up with an old friend of mine, hence we ordered loads from the menu to sample. Her niece, Taira is a great fan of mine who also goes around snapping pictures of her meal, so everyone was very patient and nice, allowing me a few seconds to snap their food. 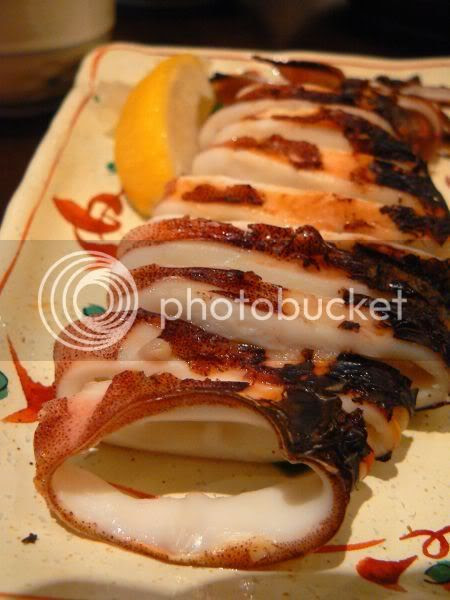 Grilled Sotong (RM15)
For starters, we had Onsen Tamago, an old favourite of mine. I often make this at home whenever I get fresh eggs. Just a simple half boiled egg in dashi broth, this got everyone's thumbs up! Only complaint is this place's air conditioner is very cold, hence food tends to get cold very fast. I did mention this to the restaurant people but they advise it is centrally controlled, thus they can't change the temperature. We also had grilled sotong - didn't think much of it as it was quite dry. 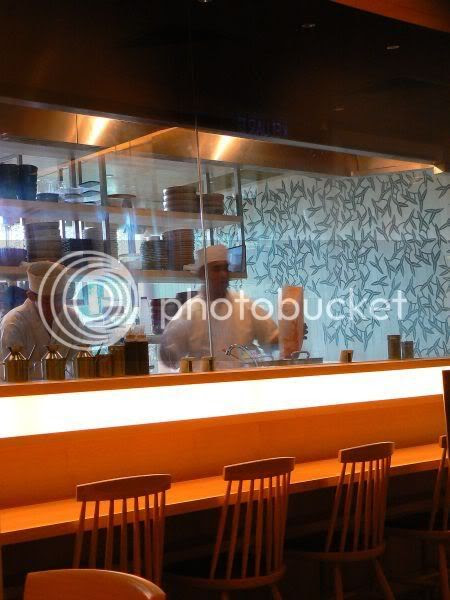 Chefs in action at the open kitchen 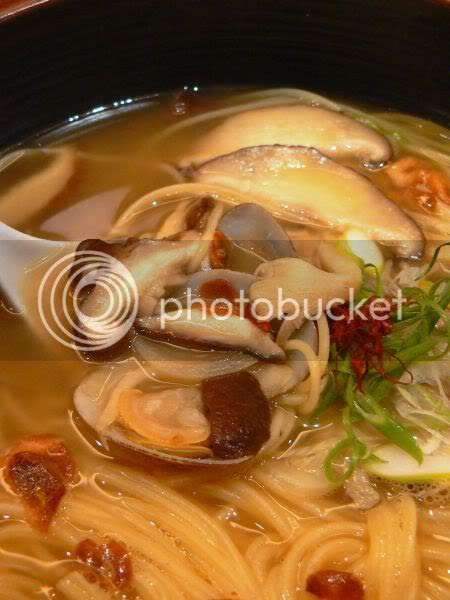 Asari Pasta (Clams Pasta) - RM25++
We had fun choosing the various types of pastas - they have Japanese ones (topped with ikura, served with salmon sashimi), ones with wafu dressing, pastas with squid ink, sesame sauce, fried pasta, pastas with soup or curry sauce, pastas with tomato and cream based sauces. This mix of Japanese and Western food is called Yoshoku in Japan. They also have Omu Rice - fried rice wrapped in an omelette. A Japanese version of the Nasi Pattaya we are more familiar with. 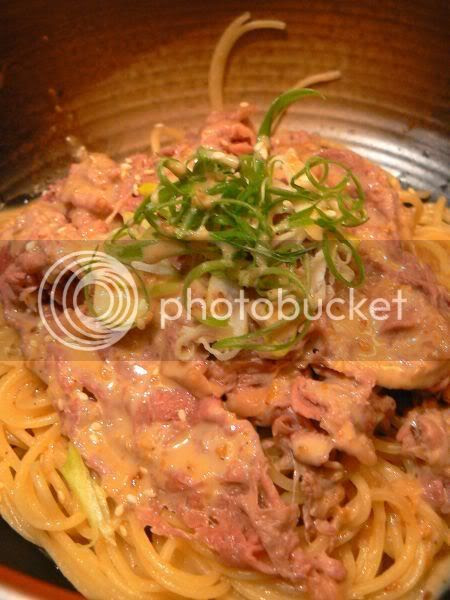 Goma Gyu Shabu (RM25++)
The goma (sesame sauce) versions were very popular with the guys. Splashie Boy had the beef version. Kinda reminds me of Shabu Shabu - beef slices mixed with creamy sesame sauce. Very nice stuff! Definitely the best pasta of that day. My friend's husband, had the Soft Shell Crab version. It was nice too but somehow, I preferred the pairing of the beef slices. According to the waiter, the Kani Avocado version with the sesame sauce, is a popular order. 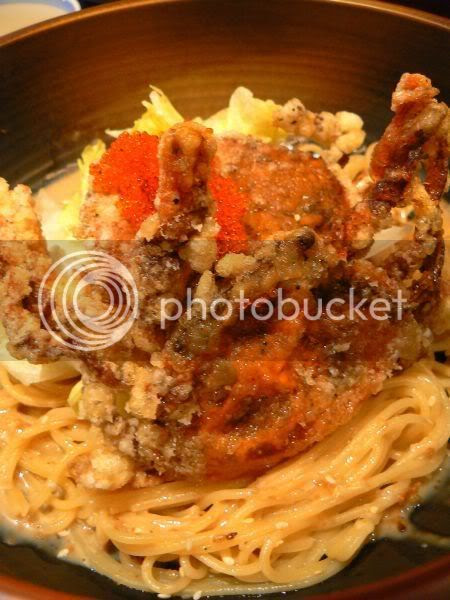 Goma Soft Shell Crab (RM22++)
I ordered clam pasta, which was served with a broth. Reminds me of Spaghetti Vongole, except it was soupy. The soup was sweet and I sprinkled lots of crushed black sesame seeds on top. Seems you can have this with curry sauce but I decided not too. I guess when they mean curry sauce, it is the Japanese version, which tastes mild and sweet. 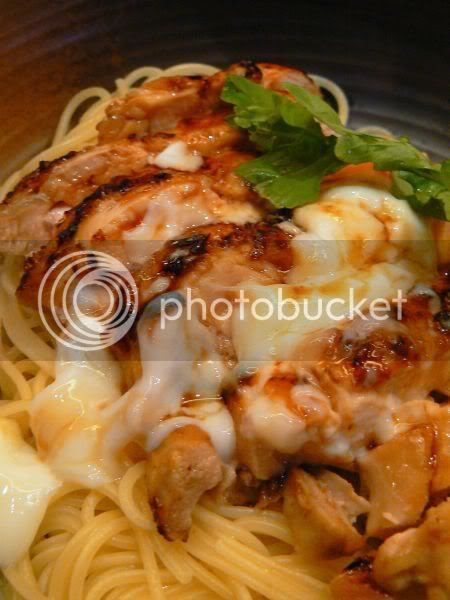 Teriyaki Chicken Onsen Wafu (RM18++)
My friend opted for the simple Teriyaki chicken. Topped with a soft boiled egg, it was nice and light. She enjoyed the bits where the yolk mixed with the pasta. 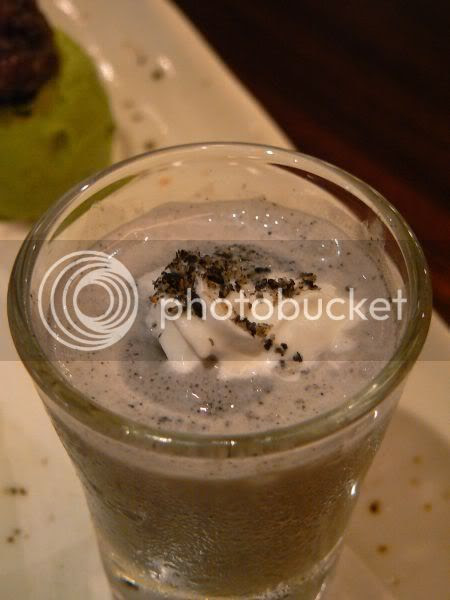 Black Sesame Ice Cream - part of Sansu Mori (RM12)
Then it was desserts and we went crazy with our orders. I guess loads of people were also ordering as they had run out of a lot of items. They had Green Tea Tiramisu, Green Tea Parfait but unfortunately it was sold out. 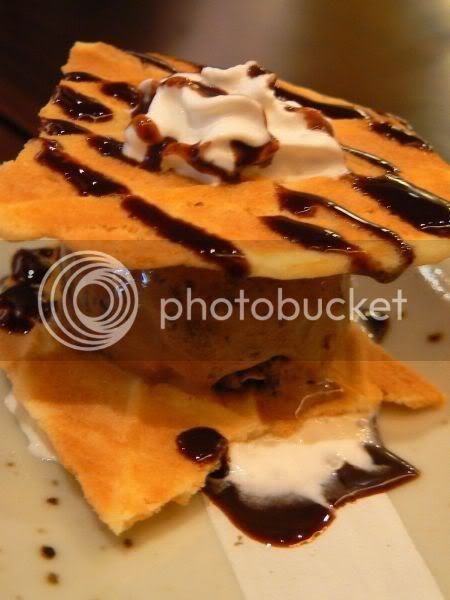 We had the Sansu Mori - a platter of mixed ice creams. One was the black sesame ice cream, which was melted by the time it reached us. Tasted not bad, but not as good as Zipangu per my friend who is a regular there. We all liked the chocolate ice cream, sandwiched between these thin crackers. It had bits of chocolate inside, that melt in your mouth. Green tea ice cream was not bad, but very small portion. 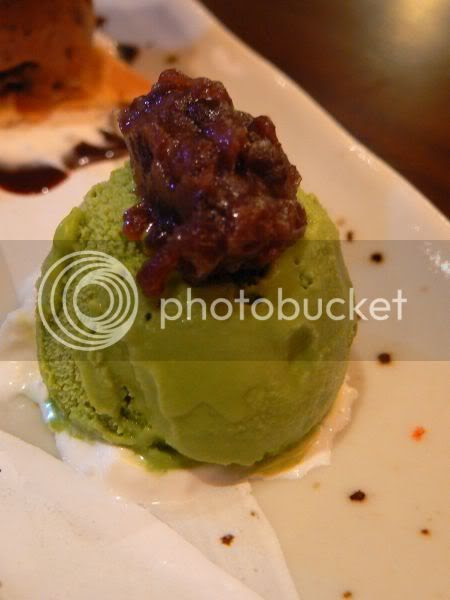 I had the Ichigo Ice - frozen strawberries filled with ice cream. Pretty unique but I thought it was nothing fantastic. The strawberries were quite frozen, hence we had to wait a while to allow it to thaw a bit before biting into one. 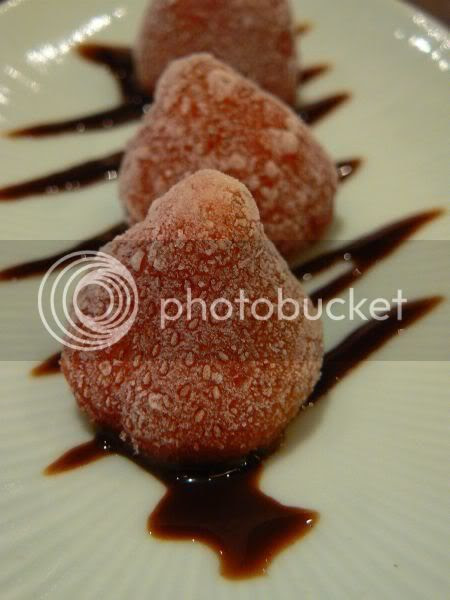 As it was a busy time for the restaurant during the festive season, service was quite slow. Seems everyone was ordering desserts at the same time. 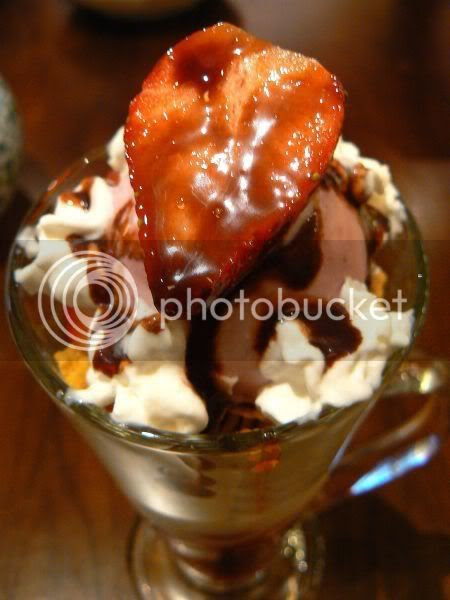 Next was the Strawberry Parfait. I liked the tangy strawberry sauce at the bottom, that complemented the not so sweet strawberry ice cream. They had added cornflakes for extra crunch. 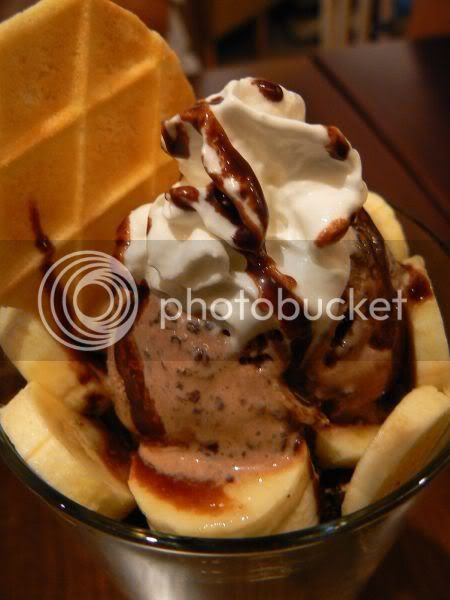 We had the Chocolate Banana Parfait, which uses the same yummy chocolate ice cream. Yummy stuff with the chopped bananas.

Overall, we enjoyed ourselves a lot. I would definitely return to try the other pasta dishes. One thing we didn't like was the hot green tea was served in a tiny pot. Although it was refillable, this meant we had to keep calling the wait staff to fill it up with hot water for us.
Pasta Zanmai
G210B, Ground Floor Promenade
1 Utama Shopping Centre
Bandar Utama
Petaling Jaya
(Pork free.)
*Disclaimer: The opinions expressed here is entirely based on my personal tastebuds and may vary for others. The reviewer also declares that she has not received any monetary or non-monetary compensation from the restaurant for writing this review.
Tagged with: Japanese Food + Pasta + 1 Utama
Posted by boo_licious at 9:00 AM

Oh the Zanmai outlets are under Rakuzen Group huh? Didn't know that. No wonder they are so much better than Sushi King and Sakae Sushi.

oh nice! what a change.. and the black sesame is certainly a very nice touch!!

Wah, the food looks good!
I Was there last week with mum but she doesn't fancy Jap Food. So we ended up eating in some taiwanese shabu-shabu restaurant.
Looked fun grinding your own black sesame =)

looks like when i put unagi and spaghetti together for lunch, its no longer confused but fusion!

Wow...not bad. Wonder if i can convince Hubby to have Pasta ala Jap style for dinner tonite. Ahem..he 'so-so' with Italian pasta but i think this would be more appealing to him.

awww i wan all the dessert! SLURP! cant wait to try tis out!!! *wait miiiiiiii*

I'm a BIG egg fan so the Teriyaki Chicken Onsen Wafu with the egg running into the pasta sounds great to me! Also the Onsen Tamago... such a simple idea! Droooollllssss...

ah... so the rakuzen group have another concept now. seriously, i wudn't consider venturing into this place just by looking at the name. after all, i'm not a huge fan of pasta. but i can never say no to ice-cream *sigh*

I didn't manage to try sooo many items when I was there as I was eating alone, but manage to try their Mentaiko Pasta, the Onsen Tamago which was fab, and their Green Tea Tiramisu. There's sooo many other's I'm eyeing on so, next round first lah lol

Didn't know there's such a place in 1 Utama. Gonna try this place out definitely!!

the food at pasta zanmai looks appetizing.. quite a few goma dressing, which i find interesting. japanese usually use them as salad dressing as oppose to pasta dressing. we will definitely try to check this place out on our trip back to malaysia this cny. so glad that malaysia's japanese choices are opening up.. more than the traditional hibachi/teppanyaki and sushi place. our first review for the yaokui blog was on pasta wafu as well.. http://yaokui.blogspot.com/2007/08/new-york-basta-pasta.html

..that is something of a twist. must try when i get back home..which will be in june:(...

i was here on new year 2008! I love this place! all the items look very tempting. ichigo ice was nice however for me... :D shall return to try other selections...

i was also grinding sesame seeds that day, but it was white sesame for tonkatsu.

Can't keep up with all the new eateries! :p

Daphne - yes, I liked the grinding bit a lot esp the mortar and pestle.

Jojo - am sure Taiwanese shabu shabu was nice too? Guess you go with friends since yr mum is not a fan.

Meiyen - Happy New Year! Hope u like the place as much as we do.

Joe - I guess that is called just throwing things around. This type of food has been around in Japan for ages. Time it arrives at our shores.

Precious Pea - I guess go for the more Jap version then or else eat Curry Rice?

Kenny - if u love eggs, Onsen Tamago is super yum! My friends loved it a lot too.

Jun - The ice creams are very tempting and definitely a crowd puller as it was packed on NY's eve.

New Kid on the Blog - I guess it is time to plan another visit to KL.

imbi and itchy - am glad u discovered mentaiko pasta. That is one of my fav items.

wenching and esiong - Happy New Year! Go check it out, hope u like it.

sarah and gan - yeah, this is usually used for shabu shabu as a dip or as a salad dressing. I like how Msia's Jap choices are expanding and hopefully Msians look beyond Jap food as sushi, sashimi and tempura.

terez - hope u will like it! am sure u will have a long list for makan places to try.

jle - cool! glad u had a good time there.

keropokman - oooh, tonkatsu sounds yum! Happy New Year to you! Here's to lots of keropok for ya.

wmw - usually end of the yr there will be loads of places opened. Must slowly explore them.

At least I can still get my dose of msian food here. Most of the other floggers have switched to flickr which is banned in use! Pls don't switch too, boo!! :D

So that is what that little pestle and mortar is for. I saw some at Daiso here and was wondering what you can pound with such a tiny thing!

hahahaaa... finaly ~
i had been waiting for your review at this place as many times i passed by i still feel very uncomfortable with the idea of Japanese style cooking pasta, guess i am wrong... :p
Tks ~ ^_^

wow...looks lke worth to try!!

kat - oh, wow! I didn't know u had such problems. Hee hee, now u know you can grind sesame seeds and meditate at the same time.

ling239 - I'm game for anything Japanese but if yr tastebuds is quite conservative, go for the tomato sauce stuff.

simon seow - yup, only problem is this place is quite small. Gets really crowded too.

jackson and jason - yup! Definitely worth a try.

Someone copy your contents 100%

how noisy was the slurping?

Hi..My friend share this good new with me..just wondering how you feel the service there?Rakuzen group always short of manpower n server like superman fly here and there i realise..I tried the Cream paste pasta Category but totally not nice..Very sticky and request to change 2 times but the Server said is like that..a bit disappointed.Luckly the thoughful server offer me to try the Wafu paste pasta...Very yummy..

Love your blog site... very informative!!! Keep up the food write-up's... and I look forward to trying this restaurant soon. I went there last CNY but it was closed. Ended up trying the Vegetarian restaurant which is on the same row in 1 Utama... quite good actually!

Wow these food are so glamorous - keeps me pushing into the dining!!