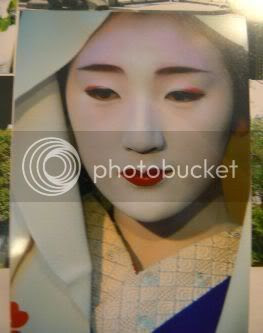 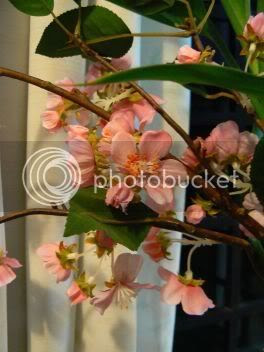 Every year, we celebrate at our friend, Mau's house for New Year. It is an invitation, we cherish as it means yummy food from her. This year, we went Japanese at her Maushi-Maushi! party. The name of the party is a play of the word "moshi moshi", which the Japanese term as hello but using her nick, Mau. Even the house was decorated with a Japanese theme - cherry blossoms, Japanese geisha pictures and etc. 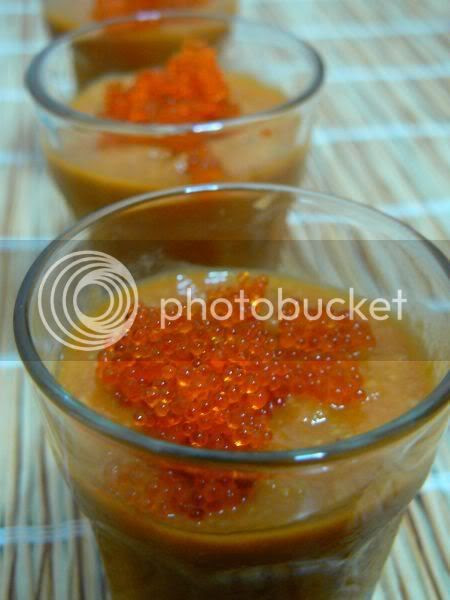 For starters, we had these soup shooters. They're not exactly Japanese with the exception of the dollop of Tobiko on top but very delish. Inspired from the Spanish dinner at Max! Kitchen and Wines, this has tomato and asparagus. Instead of crabmeat, Mau added Tobiko, which tasted just as yummy. 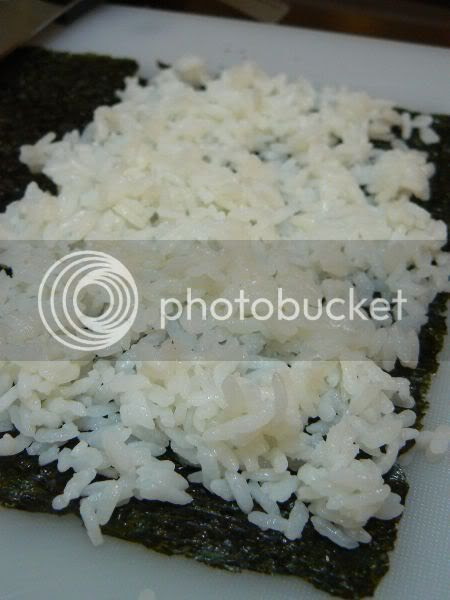 We even learnt how to roll our own maki, which was great fun. Sarah, a friend of Mau's who has experience from working in a sushi restaurant in Adelaide, was the expert maki maker that night. She was very nice to give pointers to Splashie Boy, who helped roll the maki. As the rice was very sticky, she taught us to use olive oil to keep the rice off your fingers. First, spread the nori seaweed sheet on the bamboo mat. Add rice to spread all over the sheet (about half around till the sides) 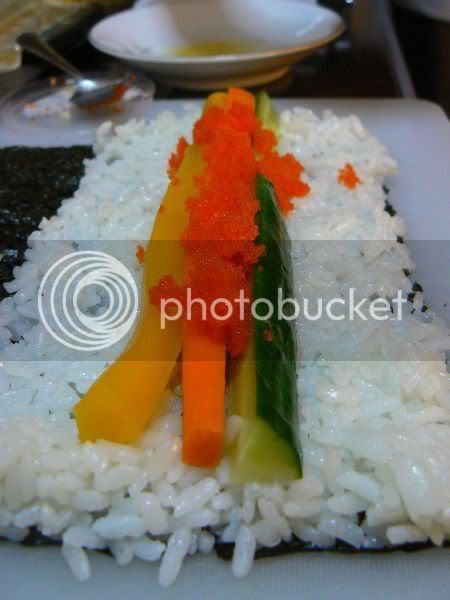 Adding the vegetables, pickles and ebiko

Add chopped vegetables - carrots and Japanese cucumber. Also add pickles in one line. Cut them off if they are too long. Top with a dollop of ebiko. 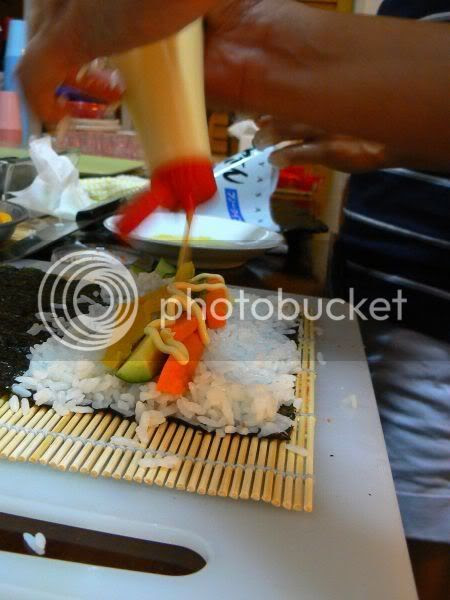 Drizzle along the vegetables and ebiko, Japanese mayonnaise from the squeeze bottle. 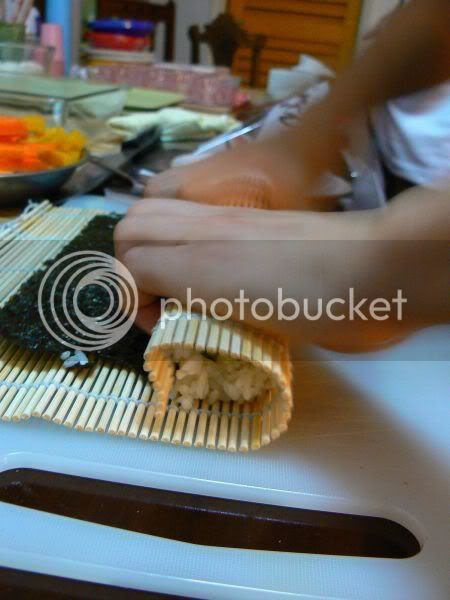 Then it is time to roll. Use the mat to help you roll it properly, while pressing down the mat to form a roll. 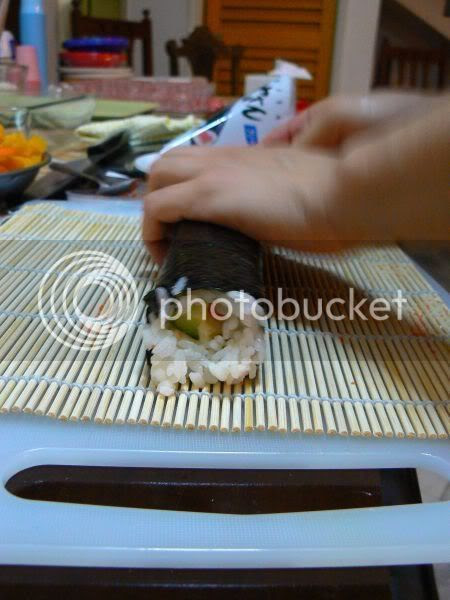 Once you have pressed firmly down, you will have a rolled rice roll. 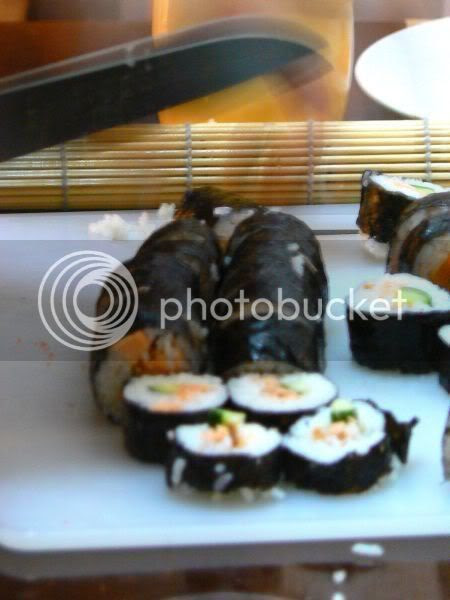 Use a very sharp knife and slice the roll into maki pieces. Discard the ends or just pop them in your mouth. 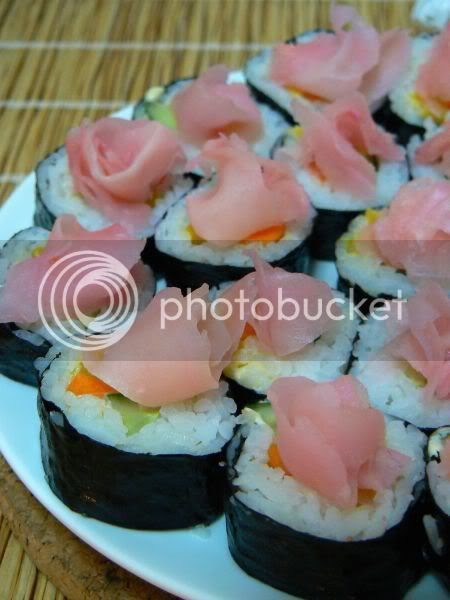 We had a few varieties - the vegetarian version with no ebiko, topped with pickled ginger gari to distinguish them. 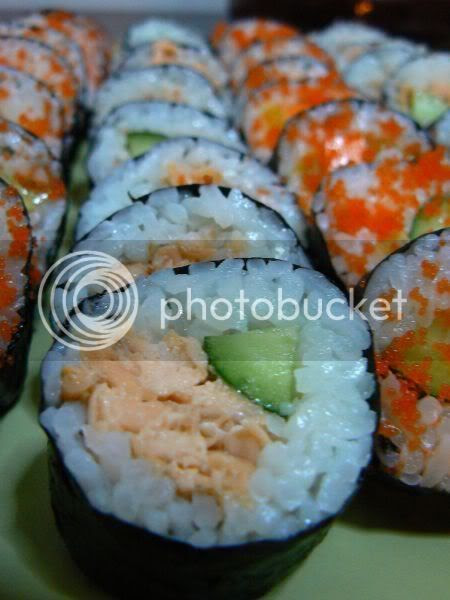 Some had cooked salmon within with a piece of cucumber. Very oishi! 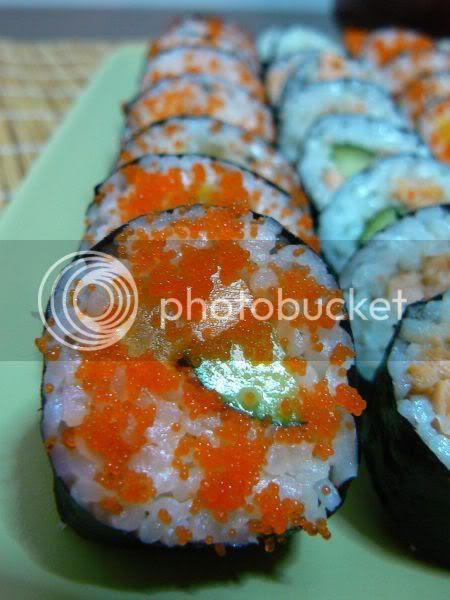 The futomaki version, had ebiko on top of it as they had dipped each slice with ebiko. Also very oishi! I liked this maki so much more compared to Kampachi as the rice was moist versus the dry tasting maki. 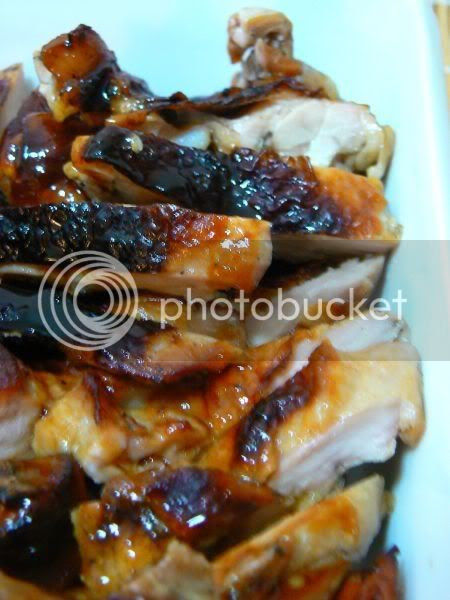 It would not be a Japanese dinner without teriyaki chicken. This was baked in Mau's oven and was the first dish to be finished. I didn't snap the picture of another dish, the pan fried cod, which was also very yummy and served with a creamy sauce. 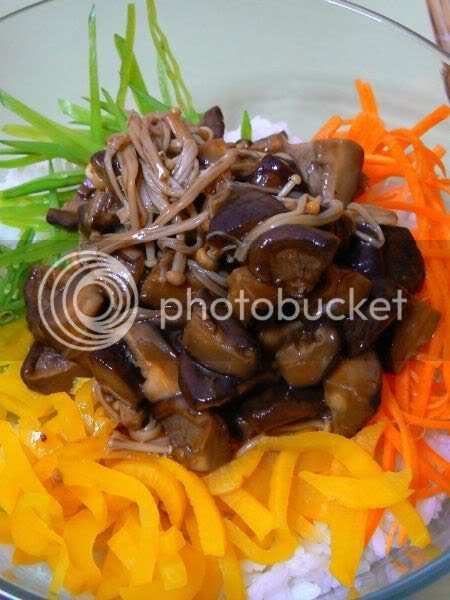 Make your own sushi

We also had another version of sushi - just grab a few nori sheets and make your own hand roll. Top it with the sushi rice, pickles, seaweed, cooked assorted mushrooms and prawns. 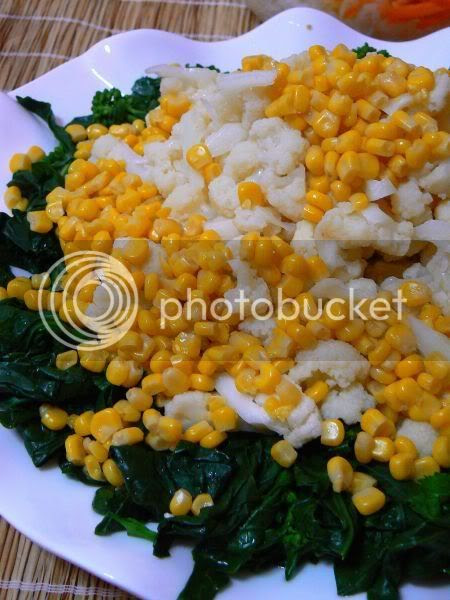 I liked the salad with the bright yellow, white and dark green colours 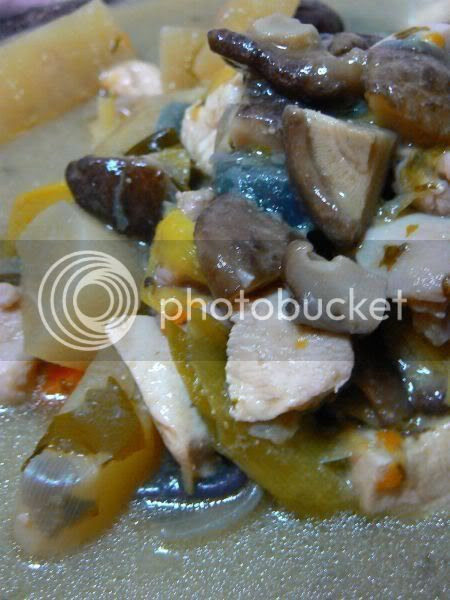 This may not look fantastic but believe me, this was such good stuff. The chicken miso soup was chock-full of chicken cubes, shitake mushrooms, radish, carrots, celery, seaweed and miso. Such yummy stuff, I had two bowls of this. 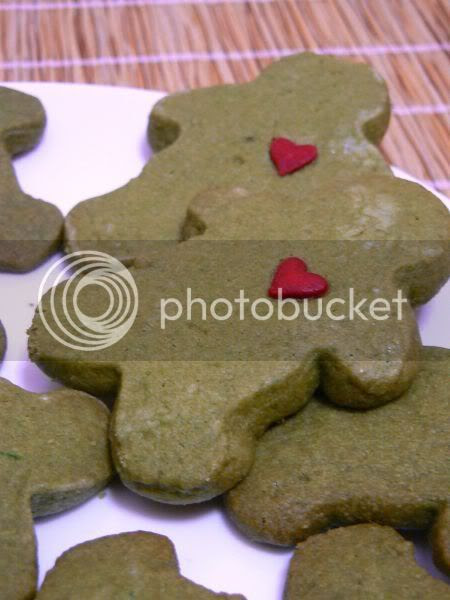 My other friend, S made these adorable Matcha Men. I love their little red hearts and the texture of the cookie - very soft and melt in the mouth. Must try this recipe again at home as it is so good. 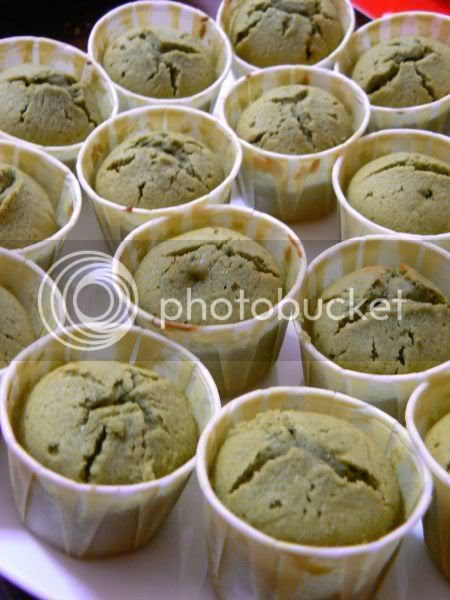 She also made Matcha cupcakes - this one was a bit dense but nice also. Will try this version one day topped with white chocolate. We also had yummy fried noodles - cha soba mixed with tobiko and pea sprouts after the countdown. Mau rented a projector and we watched Top Secret, that slapstick comedy with Val Kilmer when he was super skinny. It was great fun meeting and catching up with old and new friends. Thanks so much to Mau and S for a great time.

Can i know yr friend too?? What a great Japanese feast!

what a good way to start the new year..ironically i also had japanese food for dinner prior to the countdown!

whoa..the maki-s sure looks yummy! and the matcha man cookies are so cute. it looks like those gingerbread man cookies for xmas. your friend sure knows how to cook up a good Jap feast ;)

Haha, I had Japanese food on New Year's Day. Yeah, moist maki is the only way to go...and so creative of you guys to come up with Matcha Man! Never ever thought of that before!

What a lovely feast to start off the New Year! I love all things japanese too! :-)

Your friend sure knows how to throw a fun party. Sounds great! Wish I had a friend like Mau too. hahaha.

awwwww....we should have a jap feast like this for our JFKA meet!

Thanx for posting about our party! We have one whole year to think about next year's theme!

So much fun! We should do this one day.

nice start to 2008! and those sushi!! they were rolled so well! mine always looked sideways... haha

Just wonder why the matcha cookies and matcha cupcake look rather brown and not green.

matcha matcha mennnn, ooh will be singing that tune for awhile. What a great feast! I especially like the soup shots and desserts.

what a lovely dinner! gosh, been nearly 8 years since i rolled a sushi, reading this brings back fond memories..time to roll a sushi! happy new year boo!

Nice step by step maki in the making pics. Aiyo, I remember that silly movie esp the counter running on the shootings.

Jackson - I'll introduce you to her next time!

firethorn - yup, my friend used the gingerbread men cutters but I liked the addition of the heart bit.

nic - I never get sick of Jap food, can eat it every day too!

raynebow - Happy New Year! Yes, one must say goodbye to 2007 and feasting is the way to do it!

xiu long bao - are u cooking for us?

Mau - thxs for the great time! Hmmm, must think of some themes.

Sido - don't have the recipe, sorry but if u want, my friend is selling the cookies. Email me at boo_liciouskl@yahoo.com if you want her contact.

Daphne - Sarah was a real expert hence her makis look so pro.

Paprika - hahaha,it is definitely a catchy phrase. They're very macho but still have a red heart within.

Jason - very observant of you! Yes, she loves cats too like moi.

tummythoz - yes, it was a silly movie but quite fun to rewatch it.