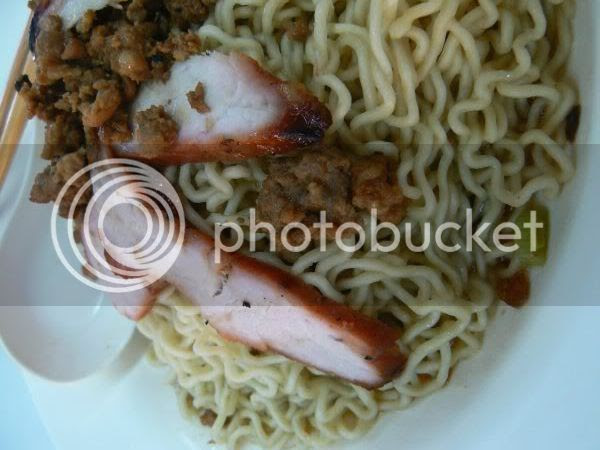 Digging through my archives I found this picture of a very nice Sarawak Kolo Mee I had in Taman Megah. It's not the best picture of it probably because of that day's lighting but believe me it's super tasty.

There seems to be quite a few Sarawak stalls within this area - the other corner shop Goodluck has one with quite a few varieties like the lesser known Tomato Kuey Teow while this one serves Kolo Mee and Sarawak Laksa. Run by a couple from Miri, I'm always fascinated with the lady's outlandish hats which she dons while cooking the noodles.

The Kolo Mee or what I term as frizzy egg noodles is handmade and tossed in a mixture of garlic oil and I suspect a tinge of lard to give it extra oomph. It's topped with minced meat and slices of char siu with a sprinkling of chopped spring onions. Besides the Kolo Mee, try their Sarawak Laksa which is also very good. The soup broth is not as tasty as the Nam Chuan version but I absolutely love their sambal belachan dip which has a wonderful aroma.

(Non Halal. Closed on alternate Mondays and available from morning till lunchtime.)

Man.. I really must go and try the real deal one day. There's this chain Sarawak kolo mee in Singapore which was pretty poor.
My review of it is here... looks a far cry from what you had though =(
http://dancingblueseal.blogspot.com/2006/08/sarawak-kolo-mee-upper-thomson-rd.html

Sometimes, I think the macro-focus in camera is not a blessing. You made me so hungry with that close-up of Kolo Mee :O
Thks for coming by my blog.

:P the kolo mee is definitely nice.. i sometimes go there on weekends..

The kolo mee brings back memories of my frequent trips to sabah/sarawak in my younger (!) days. I didn't realise I could get it so close to home!

OOOOOOOH, having just come back from kuching, i lurve kolo mee.... where's this in relation to bake with yen?

Yum, yum! I haven't had kolo mee in such a while! I like it when they cook the noodles just at that right texture where it's still al dente and retains it's spring. Now you got me craving for kolo mee, Boo! And I'm only surrounded by halal food! Boohoo...

I just cooked kolo mee over the weekend but have not posted the recipe up on my blog yet. Will do so shortly.

Meanwhile, kolo mee in Kuching (and perhaps, Sarawak - I stand corrected) is not eaten with belacan dip. Rather, it is accompanied by vinegar-pickled chilli slices. Belacan dip goes with sarawak laksa.

Ive only had kolo mee once, and that was in Kuching. My friend brought me to this funky coffee shop that was part chinese opera theatre I think. She ask for less lard but my god, it was still so damn lardy! But sooooo good! I don't remember it being like egg noodles though. I also like Kuching for their siow bee and keow. Mmmm....

d - awww, guess it entails a trip to Sarawak soon!

tigerfish - no problemo, such a good idea to make curry chicken pies for easter.

alicia - high five! Am glad it's not only me who love this mee.

lemongrass - lots of things here in KL but of course for the real stuff, one must fly back to East Msia! Gee, I miss those yummy and cheap seafood.

fbb - this place, same row as Secret Recipe, the other end of the shophouses nearer towards Fatty Crab.

Sorry pink elle! Drop by here one weekend or else all you can get at yr office area will be Maggi Mee Goreng!

pablopabla - ooops, sorry! Not too clear with my statement as the belachan dip was for sarawak laksa. Very aromatic here as they toast it.

paprika - yup, lots of sinful lard. Makes it taste simply better. Strange but Sarawak is one out of two states in Msia I've never visited besides Perlis. Probably that is why I love Sarawak food so much as I'm super deprived.

Is it still there?
I was just there a couple weeks back wanting to eat kolo mee but the stall's not there anymore.

Finally i found kolo mee in KL! I tried kolo mee once for like 8 years ago cus the usual kolo mee stall closed down already...sad :( Must try this soon. Thx for the review!

wandernut - I went a few weeks back and they were there. Will double check and let you know. Maybe they took a break after CNY esp if they worked during CNY holidays.

xiu long bao - wow! That's a long wait for kolo mee. Hope you will like this one.

there are quite a few stalls selling kolo mee in Singapore too. suddenly a craze just like the bubble tea craze.

the prices in sg is just too ex. i like the ones in Kuching.

Thanks for dropping by my blog.

For Kolo mee, you should come to Kuching. For RM2.20 or RM2.50, you can get a big bowl with cha-siew, minced pork, vege and perhaps include fishball or fish cake :)

platinum - I want to go Kuching!!! So far no opportunity but believe me, if I had it I'll be eating laksa and kolo mee non stop there.