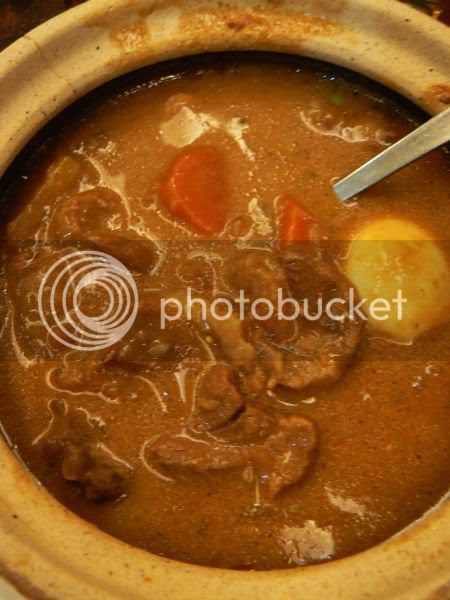 During the Chinese New Year break, when both of us were at the loose end on what to do, we decided to visit Summit Shopping Centre. I must admit, I haven't been to that place for a very long time (we're talking a few years here) but I did read about it's recent changes. Cold Storage supermarket was pretty well stocked with wide aisles (versus the cramped ones in Bangsar) and the new Point B place was not too bad as it sold Jia and New Convox items. The place was also well stocked with lots of Korean food items plus similar items which you get in a 100 Yen shop. 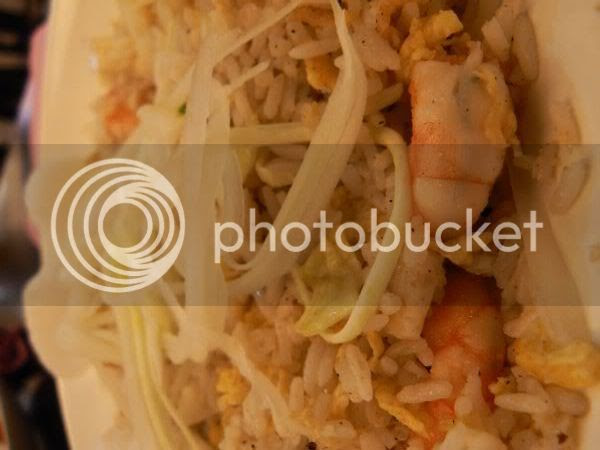 When it came to dinnertime, we wandered downstairs to their lower ground floor and ended up at Hainan Chef which I remember reading about from the USJ forums. Everyone had raved about their Hainanese Lamb Stew (RM8.90) which I ordered. It came in a small claypot accompanied with rice and a bowl of soup with fishballs. The portions was quite substantial - lamb pieces from the shoulder, carrots and half a hard boiled egg. We both liked the stew but the consistency was more like a soup. Very more-ish food as I kept ladling the "soup" to drink it up and shared it with Splashie Boy as his fried rice was kinda dismal looking. Although it had a pretty decent amount of prawns and even prawn crackers topping it, it was tasted ordinary.
Since it was night time, I didn't order their famous Hainan Char or their Roti Kiap which is what Hainanese kopitiams are all about but opted for their calamansi lime juice with cincau. I thought it was a good idea to combine the two since I always find the syrup for cincau to be slightly too sweet. Not sure whether we will return to this mall again but if we do, it'll be for their Hainanese Lamb Stew. Incidentally, this place was featured by the local food series by TV3 i.e. Jalan-Jalan Cari Makan.
Hainan Chef Kopitiam
Lot LG06, The Summit USJ
Persiaran Kewajipan,
Subang Jaya
(Halal. Open from morning till night.)
*Disclaimer: The opinions expressed here is entirely based on my personal tastebuds and may vary for others. The reviewer also declares that she has not received any monetary or non-monetary compensation from the restaurant for writing this review.
Tagged with: Hainanese Lamb Stew + Malaysian Food
Posted by boo_licious at 12:15 AM

The lamb stew looks a bit like sup kambing, doesn't it? Does it taste as spicy? I've never tried hainanese lamb stew before.

Is the soup suppose to be watery since it's Hainanese or that is just how they serve it there? I like lamb stew but the ones I tried are usually of a thicker consistency.

Didn't try their Lamb Stew, but of the half dozen choices I've tried, most of it tasted pretty ordinary. The prices there are quite reasonable though.

Wow..can't even remember when was the last time i went to Summit.

this looks like the hainanese mutton soup i tried in My Kitchen@Sunway Mas.Didnt really enjoyed that though.wonder how this taste like..

Cold storage in Summit. The last time I was in Summit, summit was a bit dark, gloomy and depressing. I guess Subang jaya change a lot after I left.

lyrical lemongrass - great write up on sek yuen esp in the dark! Nope, this was not very spicy. Must admit, not an expert on it as first time tasting it.

wmw - I was wondering that too but nothing I read seems to indicate the consistency as all I know is My Kitchen serves the mutton version which looks thicker.

tankiasu - I zoomed in on the stew as that was their specialty. Garden cafe next to it was pretty packed too.

precious pea - shame to say, neither could I hence the vague no of years I mention! Personally I doubt I will go back alone as I don't like their dark car park.

sc - this one didn't have the red dates and etc though and it was lamb vs mutton. I must go try the My kitchen one and compare but somehow a bit difficult since it's like comparing oranges and apples.

flower - it's still a bit dingy looking but then one bright star was the Cold Storage. Well stocked and big space which I really liked. Not sure if it can survive though.