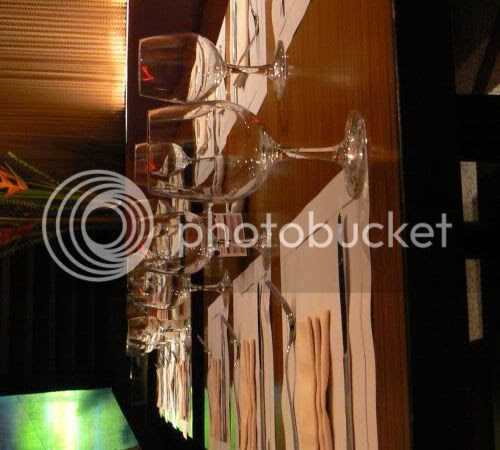 Last night, we did some fine dining at Atrium, the latest hip place along the Asian Heritage Row which is owned by the same people who run La Bodega and Telawi Street Bistro in Bangsar. It was part of Klue magazine's Going Out Series and our first time dining here. I didn't snap many pictures of the impressive interior as I know it won't turn out but lots of pictures was taken for the July issue of Klue. The people here are really sweet as they said no problems snapping lots of pictures of the place but we decided not to risk it since it was quite dark inside. 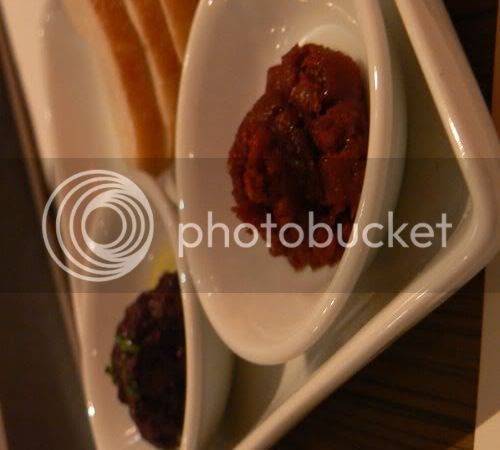 Since Splashie Boy and I were super tired after a long day, we rushed through dinner. It would have been nice to sit down longer as the band playing was really good but both of us were so tired that eyelids were drooping and brains were shutting down slowly. They served us two pastes to go with our bread - sun dried tomatoes and black olives aka tapenade. 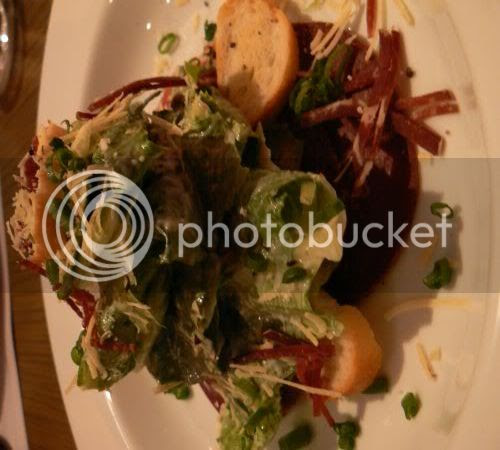 Splashie Boy had their Caesar Salad which came with generous slices of air dried beef. The dressing is quite subtle that you can't even really taste the anchovies in it. 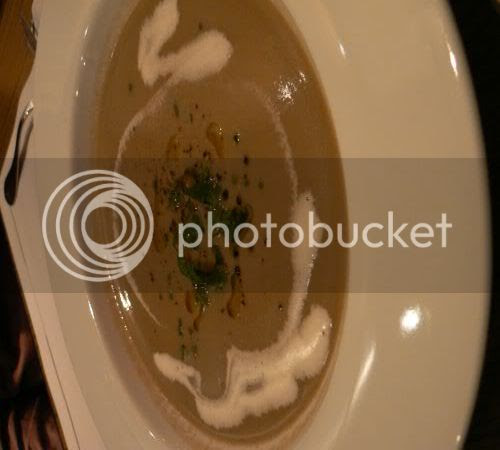 I had the wild mushroom soup with porcini oil and chives that was good and the flavours were quite subtle. I would have preferred it to be slightly thicker but then I reckon if it was too heavy, I would have felt so bloated up after my three course meal. 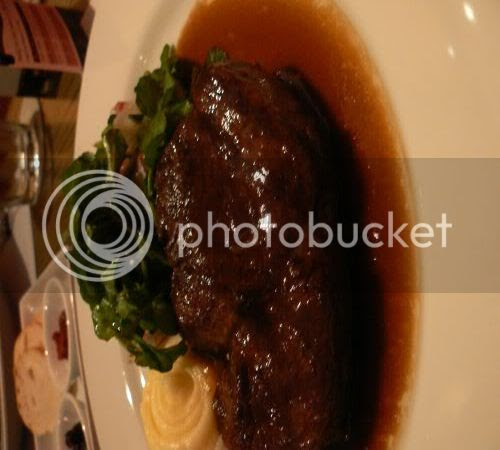 Splashie Boy had the grilled beef medallion which came with mash and watercress salad. Sorry for the not so brilliant pictures as lighting was getting dimmer. I had a taste of this and didn't really like it because it wasn't as tender per my standards. Splashie Boy thought it was okay and finished it all. 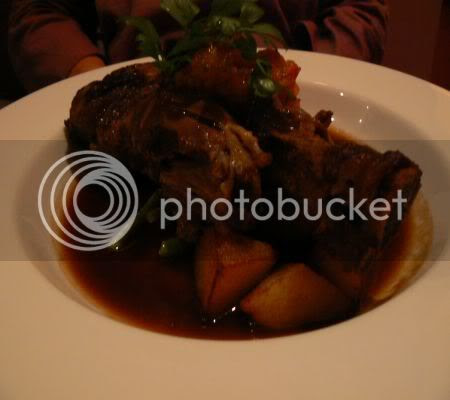 I had the braised lamb shank which turned out to be yummy. Sadly picture quality of this was bad as it was brown all over. The lamb was so tender and the apricot chutney added a nice tang to it. 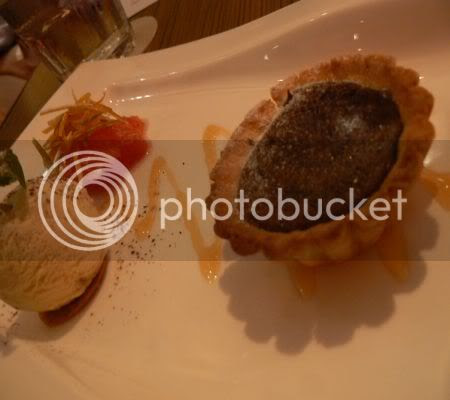 Desserts was a choice between sinful chocolate or rhubarb. Splashie Boy had the chocolate and citrus tart which he didn't like as he felt the combination of chocolate and citrus was too weird for him. Surprisingly, I liked it as I found it to be not too rich with the addition of the slight tangy taste. 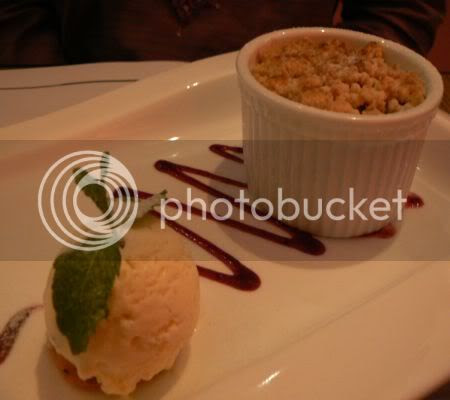 I think I definitely have a higher tolerance level for sour items as I liked my rhubarb crumble while Splashie Boy hated it. This could be because I am extremely partial to rhubarb as I have fond memories of it with lots of custard during university days.
Both of us had different opinions about some items but sometimes it's kind of difficult to judge based on a set menu. The a la carte menu looked interesting especially their wagyu beef cheek which I am sure will be super tender. Prices for their main meals range from RM30 to RM70 depending on what you order. They also do set lunches for RM25++ and a brunch buffet which serves champagne. Service is nice and friendly too.
Atrium
Heritage Row
No. 21, Jalan Doraisamy

Tel No: 03 - 2694 1318
*Disclaimer: The opinions expressed here is entirely based on my personal tastebuds and may vary for others. The reviewer also declares that she has not received any monetary or non-monetary compensation from the restaurant for writing this review.

Tagged with: Asian Heritage Row + Atrium
Posted by boo_licious at 4:10 AM

Whoa..Is it some special ocassion betweem splashie boy n u? Have u tried out Mezza Notte at The Loft??

Where exactly is Doraisamy Road? Is it in KL downtown? I am going back to Malaysia tomorrow night and will be in KL. Would like to check out the place. :)

You have such wonderful places to eat near you! It all looks wonderful!

And all this time I thought that Atrium was only a bar/ lounge!

Do you know whether the band plays there every night?

oh la la , the dessert is calling me.... they are not stingy with the food portion. :D

kampungboycitygal - no special occasion, just pig out time. Nope, yet to try Mezza Notte, is the food nice?

rasa msia - it's down town KL, off Jalan Sultan Ismail and right behind Sheraton Imperial Hotel.Hope u have a great time back home.

sher - thxs! What antics has Upsie been up to this wkend?

J - lots of press on this as their decor is so impressive. Not sure abt the band but call the restaurant ahead as the mgrs are nice and friendly - the band has 3 ladies, one on bongos and they were really good.

sounds like an interesting place.. but i haven't tried anywhere at Asian Heritage Row besides going there for work only.

regarding your darkish pix, i always use microsoft photo editor to brighten the pix if they are dark! It works nicely! It's one of the function if u store your photos in Adobe Photo Album. just wondering, what do u use to edit your pix?

jesscet - I don't enhance my pixs at all except resize them. Keep meaning to use Picasa but have been so lazy.

Glad to read your review. Was thinking about trying this place. Was yours a set meal or did you order ala carte?

mycoffee - the meal was a set one prepared for the particular event so sorry, can't give you pointers on their a la carte menu.

hey, where can you buy rhubarb in KL? i've been looking and looking....maybe i dunno what to look for. its a long red celery like thingie right??? virtually all nigella's books have rhubarb something or other.

Hi all, I have been dining at Atrium on biz meeting with 10 people it was superb. The starters were really delicious. We chose lots of different type of starters.. you guys won't be disappointed. As the main course were great too except i just didn't like the taste of the wagyu cheek gravy they made.. its tasted a bit bitter.. then i changed to lambracks instead. The great thing was u can change yr dinner with something that u like if it turned out to b somthing u dislike.. no extra charge.. great isn't it?