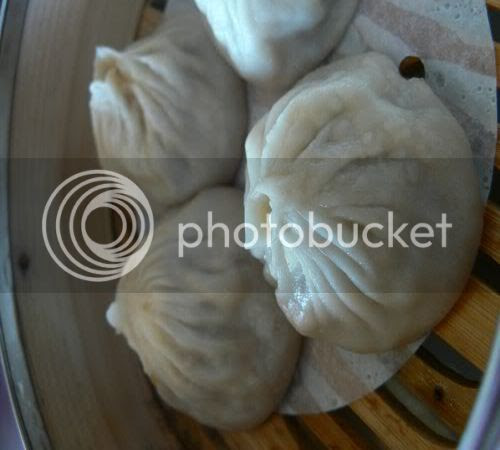 Recently I noticed that the food scene in SS2 seems to be changing from the usual hawker fare to more modern outlets. This is quite evident with the emergence of Hong Kong chan tengs, kopitiams, noodle houses, steamboat restaurants and etc. There's even a Japanese restaurant which has taken over the shoplot space where Ah Lok Kopitiam used to be. Hopefully it survives better than the previous Japanese place which occupied the space right across from it.
Incidentally, steering off topic from food, another trend I notice at SS2 are the wedding shops taking over the houses that surround the commercial area. It used to be just within the main road at SS2/24 but even the terrace houses that face Lorong Seratus Tahun have not been spared as Covershots open a branch there. You can't miss these places as they're nicely decorated with lots of morning glory surrounding their shops that contrast so sharply with the dingy houses.
Although I am still very old school as I prefer eating at the coffeeshops versus the Hong Kong chan tengs, I did venture to One Noodle that opened in July 2006 since it boasted xiao loong baos and lai mian. The menu is extremely extensive that one has to sit down a while to digest all their offerings i.e. eight varieties of Lai Mian, thirty types of dim sum which are steamed or deep fried, Teochew Loh Shui Duck or Chicken, porridge, fried rice, rice soup, claypot dishes, stir fried dishes and desserts. 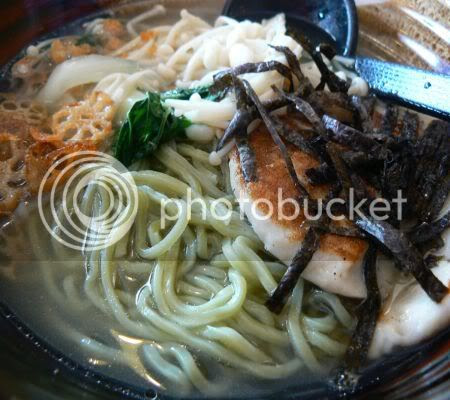 A quick check with the people who run this place indicated that it's a branch of their main outlet in Kepong but their menu is more extensive here. Xiao Loong Bao was ordered as I wanted to test them out and a bowl of their Buckwheat Noodles since it's unusual to find this item.

The noodles came in a jiffy while my Shanghai dumplings took forever to come indicating that their dim sum kitchen was obviously facing problems. Even the people next to me were all patiently waiting for their dim sum items. Taste wise, the xiao loong baos were not too bad. The skin was definitely better and thinner than Dragon-i's, soup was nice but slightly oily and the meat filling was quite soft. 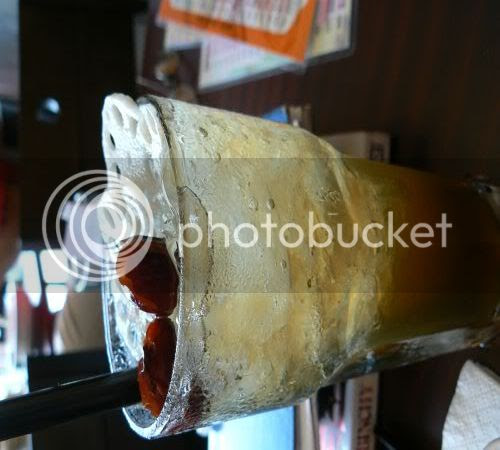 I liked my green coloured buckwheat Lai Mian which was garnished with deep fried lotus root slices, enoki mushrooms and seaweed strips. An extremely flat and pan fried fish cake was also in the huge bowl which was yummy. Most of the time, places like these mask the food quality with spicy soups so it's best to taste the clear soup to determine if they are nice. This place passed the test as the buckwheat noodles' broth was nice and full of flavour. I'm sure it has been enhanced by MSG but if must have been a pinch.

Finish off your meal with a sip of the refreshing lotus root and red dates drink. They also serve honey and watercress tea which is excellent for beating the heat and haze. Their desserts also look interesting with a selection of enhanced tau foo fah with fruit purees.

On last count there's about 8 bridal shops in SS2, all concentrating around the BHP petrol station, insane heh?

wow....buckwheat noodle, sounds worth a try!! What is the taste of the fried lotus slice? sweet? or just plain .....

this looks good! been looking for another place to have la mien. the siewloongpau looks yummmm... *drools*

That's the world I guess - a constant wave of modernisation.
(It has its pros and cons)
:)

One Noodle is probably one of the better places in that particular row of shops though.

I tried Prince Cafe just a few doors away and thought that One Noodle was nicer.

Must try the buckwheat noodles. Oh, thanks for linking me in this post of yours.

The other place that I like to go to is HK Express, better than Prince Cafe and Wong Kok, in terms of HK type food. They are doing a teatime promo at the moment, 30% off ala carte food daily from 3pm - 6pm. It's next to Chef Loong.

cookies cream - not too sure abt how they cook Loh Shui items but I believe it's braised duck.

jackson - which lotus root? the fried one was nice while the one in the drink was crunchy but kinda tasteless.

May - Another place to venture is Shanghai 10 in Bangsar. It's where Chef Loong from SS2 has gone to.

J - it's sad as I still prefer old style kopitiam and hawkers.

wmw - thxs for the tip on HK express. I must admit, I rarely eat at chan tengs though.

cookies cream - not too sure abt how they cook Loh Shui items but I believe it's braised duck.

jackson - which lotus root? the fried one was nice while the one in the drink was crunchy but kinda tasteless.

May - Another place to venture is Shanghai 10 in Bangsar. It's where Chef Loong from SS2 has gone to.

J - it's sad as I still prefer old style kopitiam and hawkers.

wmw - thxs for the tip on HK express. I must admit, I rarely eat at chan tengs though.

everyone says this place is good without exception... gotta get my ass there one of these days :)

Like we're losing that little part of our (food) culture, right?

wyejon - be patient though as service is quite bad.

J - I know, hence I still support the hawkers especially whenever I am in SS2.

One group walked out while we nearly walk out as well - even when my friend finished his noodles while still waiting for mine. As for the waiter, the guy simply ignore repeated requests on the wehereabout of my noodles
until I demanded to see the Captain!

"Loh Sui"... is a pot of sauce (with herbs and spices), used daily by them (repeat and repeat and repeat...), so that it's full of flavour... in HK, some famous restaurant even keep the "Loh Sui" sauce for years! Basically, you can use the sauce to braise anything (chicken, duck, meats...)