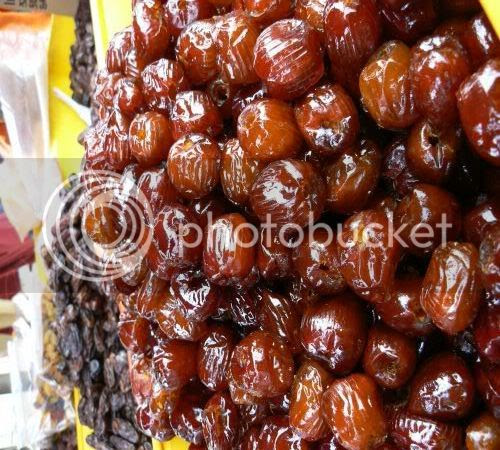 If you're a faithful follower of this blog, you would know I went Ramadan Bazaar crazy last year and covered most of the major bazaars in town. This year, I think I'll revisit those bazaars and snap different kind of pictures as those are the major ones which I love to visit. I'm also trying to cover more bazaars at out of the way places. If you do know of any which are good and selling unusual items, do let me know and I'll try and visit them if time permits.
Splashie Boy decided to kick off this year's Ramadan by dragging me to a place which I've never been before i.e. Gombak. The place was super packed with people as we were quite late and it was the first day of Ramadan. The bazaar does not have much variety hence I'm just focusing on some stalls which caught my eye. Not much in terms of kuih at this place but we did spy some kurma dates from China. 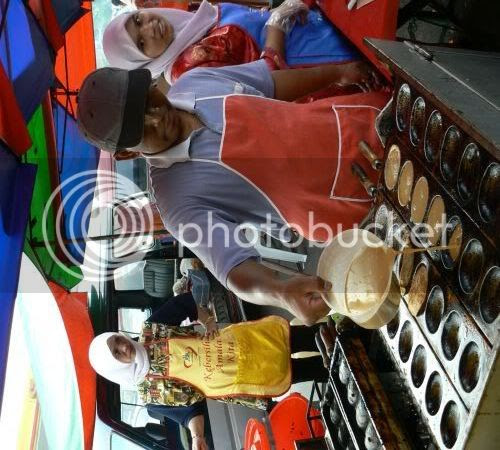 Something you also don't see at most bazaars, they were making Akok, a Kelantan specialty made from a batter that is rich with duck eggs, brown sugar and coconut milk with a hint of pandan flavour. It's poured into these custom made molds and cooked over the fire. 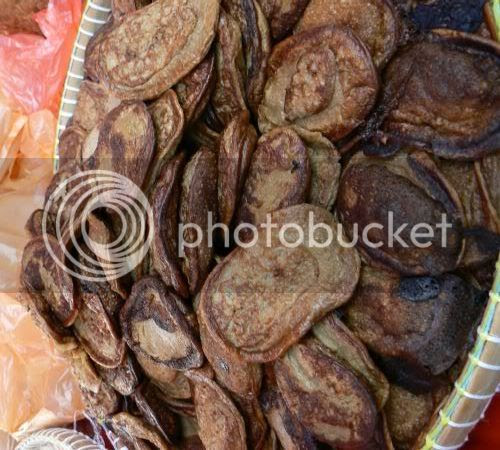 I didn't get to taste any to see if it was good but they were selling like hot cakes. 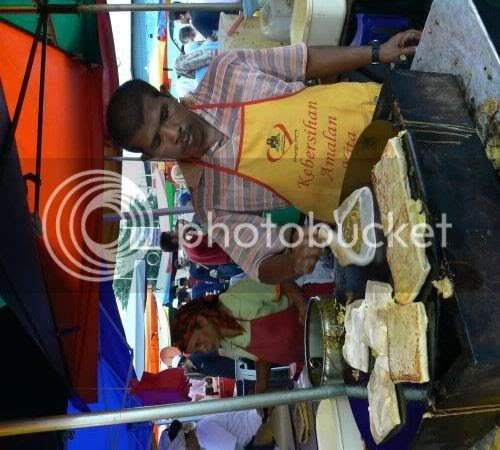 This stall caught our eye which was selling Murtabak Pantai Timur as their murtabaks were unusually thick. I spent quite some time snapping pictures here and saw them make the murtabak by rolling out the dough balls until it was paper thin. Then it is placed on the hot plate and they will ladle a spoonful of the cooked meat mixture into it. Finally it's folded and then cooked on the hot plate until it is crispy. 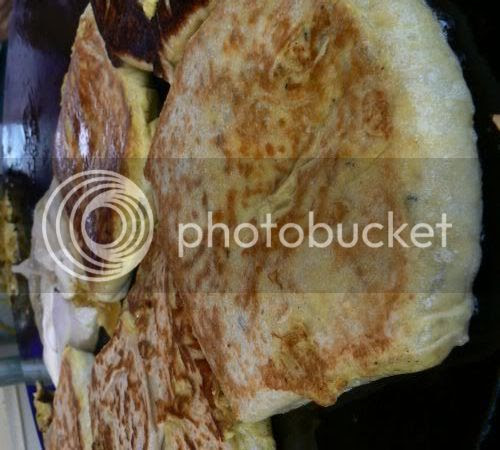 A close up of the murtabaks which you can get in either chicken or beef for RM2 a piece. We tried one piece and it was yummy - definitely one of the better murtabaks we have eaten. 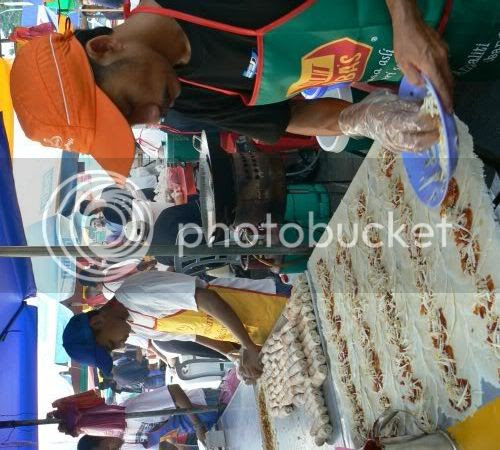 I always love how they make popiah basah as it's like an assembly line. The popiah skins will be lined on the stainless steel table and then spread with the chilli sauce. Ingredients are then slowly added i.e. bean sprouts and cooked yam bean. Then it's rolled up and ready to be served or deep fried. 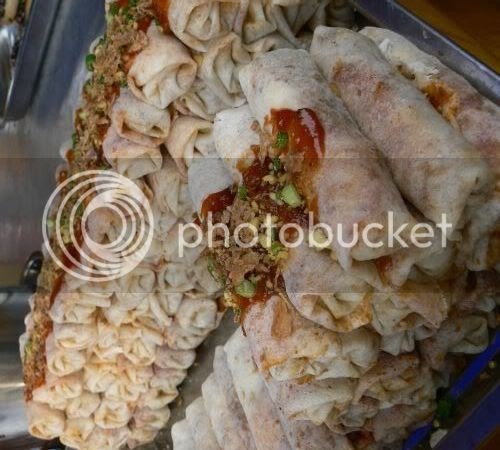 These stacks of popiah basah always look great especially after they sprinkle chopped peanuts and chilli sauce on top of it. 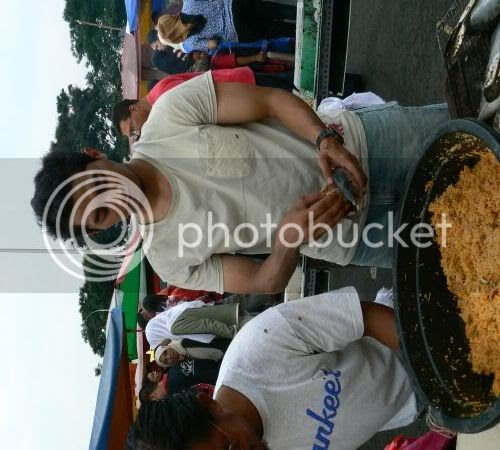 This ikan bakar stall known as Ikan Bakar Warisan Pak Kob was doing booming business hence I figured out it must be good. They had stuffed ikan where a mixture of coconut and herbs were placed inside the fish and grilled over the charcoal fire. 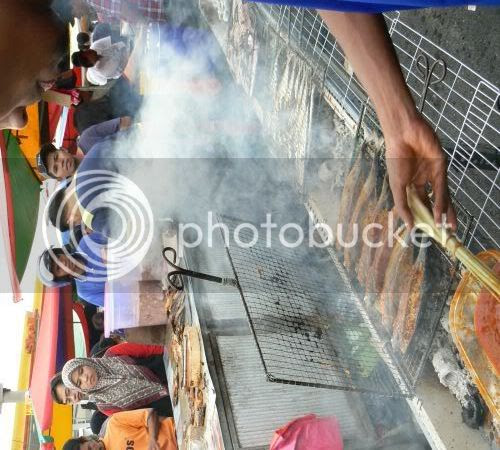 Here's the back view of the stall which was huge as they had rows and rows of charcoal stoves which a few guys were grilling fish continously. What's unusual about the way they grill their fish is they add a sauce on top of it with a bunch of lemongrass which reminds me of the Ayam percik sauce. We had the stuffed fish and the Ikan Siakap Bakar that was sliced in the middle and grilled with the sauce. The stuffed fish wasn't that fantastic as the grated coconut stuffing was too sweet. The memorable dish was their Ikan Siakap Bakar which was full of smoky and spicy flavours. Usually in Ramadan Bazaars, food is always cooked on the spot hence it's no surprise to see lots of smoke around the area. In fact, one good way to look for a bazaar is just follow the smoke trail. Another popular item is the Ayam Percik that is stuffed between two sticks and grilled. 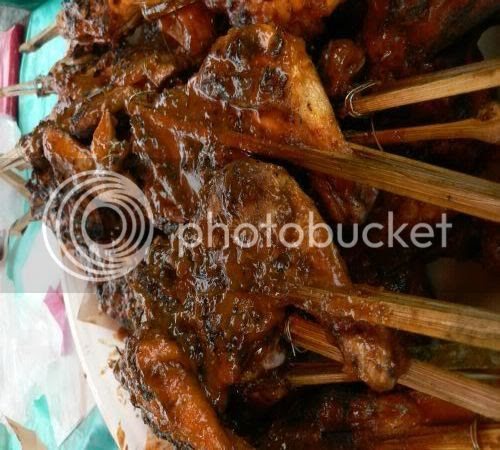 A sauce is added on top which is kinda sweet. Most of the time, it looks really good but when you get back and eat the chicken, it's not that fantastic. This particular stall's ayam percik was quite dissapointing as it was dry.
We suspect there is an even bigger Ramadan Bazaar in Gombak but since we were both not familiar with the area, we decided not to venture further. However, I did notice lots of Nasi Padang/Minang stalls further down after the Ramadan Bazaar which looked really interesting.
Ramadan Bazaar
Taman Greenwood
Gombak

(If you come from Jalan Duta, drive straight down Jalan Kuching. Take the elevated highway after Makro and turn left into Batu Caves. Take the lower road towards Gombak. At the traffic light, go straight. The bazaar is on the right hand side of the road, can't miss the smoke and people. Sorry for the lousy directions as I am totally lost at this place.)
Tagged with: Malaysian Food + Ramadan
Posted by boo_licious at 8:08 AM

gombak is too far from me . i think i will go to the sek 14 one that u recommended last yr.

suanie - I know! Think he was over ambitious in getting me to go somewhere far away. Will probably do the ones which are nearer sometime this week including the Section 14 one.

yoo.......u r making me hungry again!!!!! Why not u organise a buka puasa gathering for food blogger?

jackson - I don't eat much at one sitting hence buffets are kinda wasted on me. Anyway, I thought you're organising a trip to Imbi Market soon?

wahhh kheng arhhh. i think i'll just sit here and drool over the pics. i need to go on a diet!

Mmm, you are inspiring a major craving for murtabak in my tummy right now...!
:)

The Bangsar bazaar has moved around the corner from where it was last year. It's still near the Jolly Green, but facing Jalan Maarof now.

the TTDI bazaar has also moved to the open space parking lot next to the old Jaya Jusco. i haven't been to the bazaars yet (it's only 2nd day into Ramadhaan :p) but there's this guy at TTDI who sells briyani and people just line up patiently to tar pau his food!
i think there are also Ramadhaan bazaars in the kota damansara areas, sections 3, 5 and 6 - if I am not mistaken.
There was a write-up in the Star on Saturday (I think) with a list of Ramadhaan bazaars.

Just a thing to mention, Ramadhaan buffets are really not for me personally, as when one is fasting the whole day - the last thing one wants to do is eat like crazy!

wah ramadan is coming! i can only see, sense, smell all these wonderful local cuisine when i back home, and guess wat, i stay quite near to gombak! hahahaa!

hey jom mari organise one blogger buka puasa lah! be it yourself or jackson! hehehe... must be very fun!

babe - I think one can just get full from the pixs!

Tigerjoe - yeah I heard abt it's move to Jalan Telawi One. Must go and chk it out as a family friend helps out in one of the stalls there.

rayhana lisa - I read abt the TTDI move. Kinda strange they shifted it out from the mkt's parking lot but I think that was the original area it used to occupy a few years back.

swee - never mind, when you finish with LCB, you can get back and eat lots of the Malay food.

carcar - wow! Lucky you - lots of yummy food in Gombak. Will work on Jackson to organise Imbi mkt makan trip.

kris - not too late! Can book air ticket now and arrive just before Raya starts.