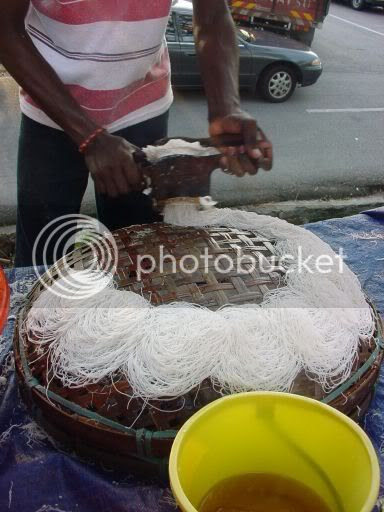 It's amazing what you get to see at night markets (Pasar Malam in Malay) and I was bowled over by this little stall at the SS3 market which is held every Tuesday. They were selling all kind of Indian goodies but what was unique about them was it was freshly made on the spot for you. It was my first time seeing how they make putu mayam or string hoppers. This guy had a tub full of white dough which is made by mixing rice flour and water together. He takes a large portion of it and stuffs it in a sieve and presses down. Strings of the dough will come out and he twirls it around to make it in a round. 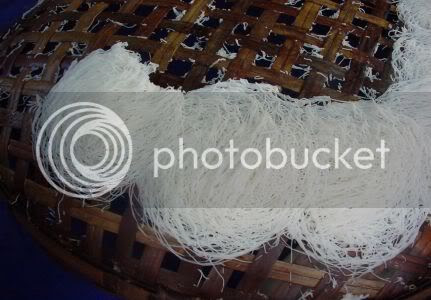 The guy was working extremely fast hence I had to take a few pictures before I could actually get a good picture. Here you have a close up of the putu mayam. It is then steamed on the wooden baskets and placed in front of the stall to be sold. You eat it with freshly grated coconut and brown sugar. 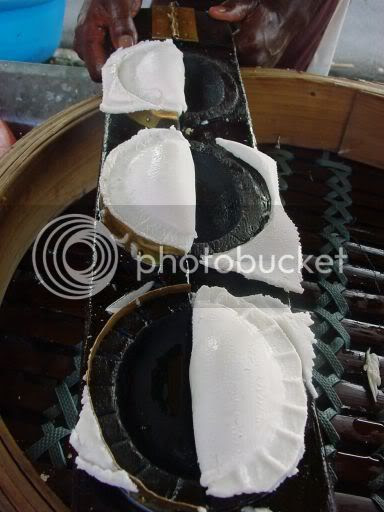 They were also making this sweet puff (no idea what is the Indian name as the lady just told me it was called sweet puff) with the same dough. A piece of flattened dough is placed in the mold and then the filling (seen below) is added. Another piece of flattened dough is then placed on top and the mold is pressed together to shape them into puffs. These are also steamed before being sold. 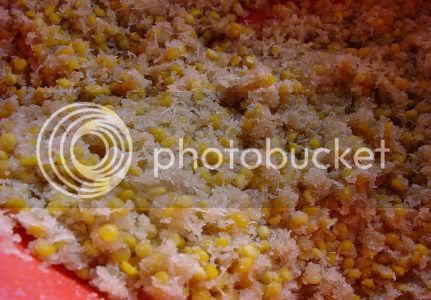 The filling of the sweet puff consists of yellow chick peas and grated coconut that has been sweetened. 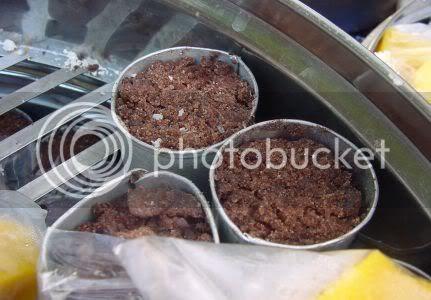 Besides the putu mayam, sweet puff, they also were also serving vadai which look like deep fried doughnuts made from dhal flour. There is also another version of putu mayam that uses rice flour but is packed in metal cylinders. There is a brown and white version of this which is also steamed and reminds me of the Malay putu bambu. Not sure what is it's name so if anyone knows, please do drop me a comment.

SS3 Night Market
Along Jalan SS3/29 and is opposite the 7 Eleven
The market is segregated between Indian, Malay and Chinese stalls
Every Tuesday from approximately 5 pm onwards

there's a stall just like this in Puchong... wonder if they are the same ppl.

They probably are becoz most of them travel from each night mkt to get business.

woah! that puta mayam looks so amazing! i want one of those machines! with coconut on top!? delicious.

thanx for the insight...first time i'm seeing that too.

gorgeous! when j and i went to ecuadorian markets, we saw somevery interesting food items being made...sugar cane, for instance! stripped and chopped into small pieces for chewing on, or pressed for juice! great post =) thanks!

I really enjoy reading your blog because it is always updated. Since living in Perth, you blog as been my way of satisfying my craving for local food and remind me of Malaysia. Thank you. I saw one TV program showing how to make putu mayam by an American chef. And also about one Australian lady opening a cafe in Spain selling Australian and Asian food. And that asian food include Malaysian food. Wow ... a mat salleh lady cooking malaysian food.

long time no eat lo.. quite miss it leh. toooo baaaad not staying near by sana :<

i've tried the indian fried doughnuts b4! tasty indeed!
i dont think i can find this at the ss2 pasar malam...

stacey - it looks like you also need a lot of elbow grease to press the mold down to get the strands.

foodcrazee - I felt like tourist only as never seen before.

kate - we have that too! It's called sugarcane juice. Will try and get a pix of them one day for you.

flower - start your own? Am sure you'll make lots of money.

loc kee - think u go to any Indian shop can also get but not so fresh.

u know, my bro's indian friend said we got it all wrong. eventhough many non indians call it putu mayam, its name is really something else (I can't remember now) and putu mayam is another steamed rice flour item with filling inside and cyclinder in shape.

oops sorry, didnt read your entire post. but in regards to the previous comment, i've checked out with my bro. it's called idiappam! ( :

hi there! thanks for the food blogs. really enjoy it. if you like putu mayam, would suggest the one in brickfields night market. they are a family who also does the goodies fresh. the brown sugar that comes with the putu mayam rocks...it is fine and coats the putu mayam nicely when it starts to cool.

tytty, i think the one with gula melaka filling is called putu piring. idiappam is the tamil name for putu mayam i guess.

the brown sugar should preferably be good gula melaka. some sellers add brown sugar coz it's cheaper, but it's certainly not as fragrant or tasty!